Easter story confronts us with reality of the world 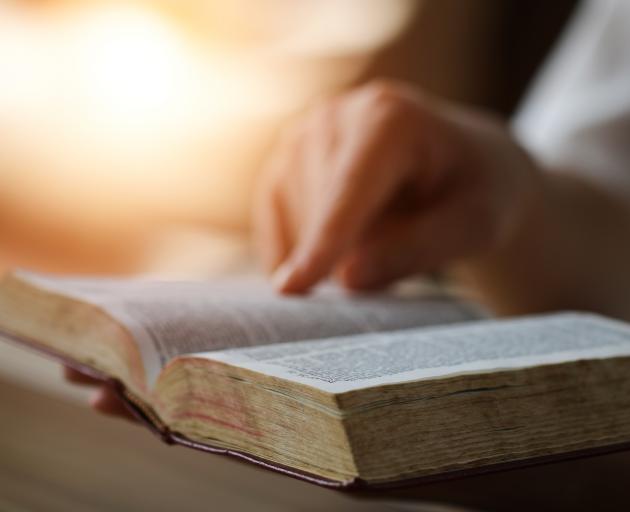 Is the Bible still a part of our shared collective knowledge and understanding? Photo: Getty Images
Easter mysteries no longer seem to have a hold on our collective imagination, even among some of those who claim to be Christian, writes James E. Harding.

In a couple of weeks, the ancient Christian feast of Easter will be upon us. What that truly means, however, will almost certainly be lost on many in our community and wider society.

In Dunedin, where I live, teach and worship, Easter will be noteworthy this year for two not entirely unrelated things: trading on Easter Sunday, and Ed Sheeran.

I am not going to engage at this point in a puritanical and morally self-indulgent tirade against trading on Easter Sunday - and certainly not against Ed Sheeran concerts - though there are certainly strong arguments against Easter Sunday trading that have at least as much to do with the welfare of workers as with religion.

What interests me far more is the fact that the Easter mysteries no longer seem to have any kind of hold on our collective imagination, even perhaps among some of those who claim to be Christian.

I was reminded recently, following a public lecture at the university, that in our society the Bible is, as a colleague succinctly put it, "recumbent". That is to say, the Bible is no longer a shared point of reference, and to appeal to it in public is to invite puzzlement at best, and at worst suspicion or ridicule. The same is true, more generally, for much of the Christian tradition to which the Old and New Testaments belong.

For me at least, this presents a significant personal challenge. For not only do I read, and sometimes preach, the Bible as sacred scripture, but I am also charged with teaching its laws, narratives and poetry in a secular university, where I cannot presume that my students share the same assumptions as myself about why they are important.

To be sure, the Bible, and the Christian truth claims that are based on it, are still sources of inspiration and authority for many people in New Zealand today. It would be foolish, however, to pretend that this is the norm. Even for members of the churches, where the Bible continues to be read as sacred scripture, much of it is quite literally a closed book, and the parts that are not a closed book are often poorly understood, sometimes with dangerous consequences.

That said, it would be quite wrong to be too nostalgic about the times and places where the Bible was assumed to be a byword for truth. For all the richness and beauty of the Bible, it contains much that we should find morally disturbing. Many of the cultures that have transmitted the Bible since antiquity are bloodstained: think of the Crusades, the Thirty Years' War and the dark legacies of European imperialism. And we are no longer living in a context where the Bible can be used to police what people say and think.

Yet it would also be wrong to follow the path taken by some strands of modern liberal theology, which have rethought and reinterpreted the biblical tradition with such thoroughness and zeal that in their eagerness to rebrand the biblical tradition, and presumably to make it relevant, they have largely stripped it of both its ancient meanings and its power.

Despite all this, I remain convinced that this obscure, ancient book bears witness to a personal God who confronts us in the person of Jesus Christ with judgement and mercy, and offers all of us the promise of forgiveness, healing of soul and eternal life.

Precisely this God of mercy and judgement is at the very heart of Easter. At the moment, Christians are living through a time of prayer, penitence and preparation known as Lent, which will conclude with Holy Week and its devastating climax in the three days - the Easter triduum - that begin on Maundy Thursday evening and end on the evening of Easter Sunday. These are the days when, more than 2000 years ago, a Jew from Nazareth in Galilee was betrayed to be crucified, and, believers still claim, three days later returned from the dead.

What we are commemorating here is not so much a scandal to the world we live in, as simply incomprehensible to it. The God who brought all creation into being and sustains its fragile life entered into this world of suffering, pain and sin in the person of Jesus Christ. This Jesus surrendered Himself to the cruellest of executions on a Roman cross, descended to the world of the dead and destroyed the hold of sin and death over us once and for all by rising bodily to new life.

This astonishing moment is what we celebrate on Easter Sunday. To the modern, secular mind there could be nothing less palatable than this, and for many people, believing in this story is naive and silly.

Yet what is beyond doubt is that we live in a world where minds and bodies are scarred and shattered by suffering, pain and alienation. Affluence and deprivation alike have caused egregious damage to our common humanity.

It is my belief that it is the Easter story alone that confronts us with the reality of this world as it truly is, and, if we will only listen, shows us another way.

- The Rev Dr James E. Harding is senior lecturer in the department of theology and religion at the University of Otago, and an ordained priest in the Anglican Diocese of Dunedin.

We Christians are to say what we mean and the Rev. Professor Harding has done that, I think. He will be happier to have provoked at least one comment than none at all if what he says is disturbing him so much. I read all the way through looking for what Dr. Harding was thinking about the nature of the Bible and the nature of Christ. Is the Professor saying Jesus Christ is one of many alternative options to post-modern secular thinking or is he committed to Jesus Christ being the only way to God? If the latter, would he please say so?

Mystery is impenetrable. If we are to say who Jesus is, we must contend with a lot of theological substance. Is Jesus 'the way' to God, the Son of God, a Man, or God? If God, there is no Trinity, there is One, and a Holy Ghost. If none of this matters, Ray, say so.

Discussion of Religion may be postmodern, but it is never Secular.