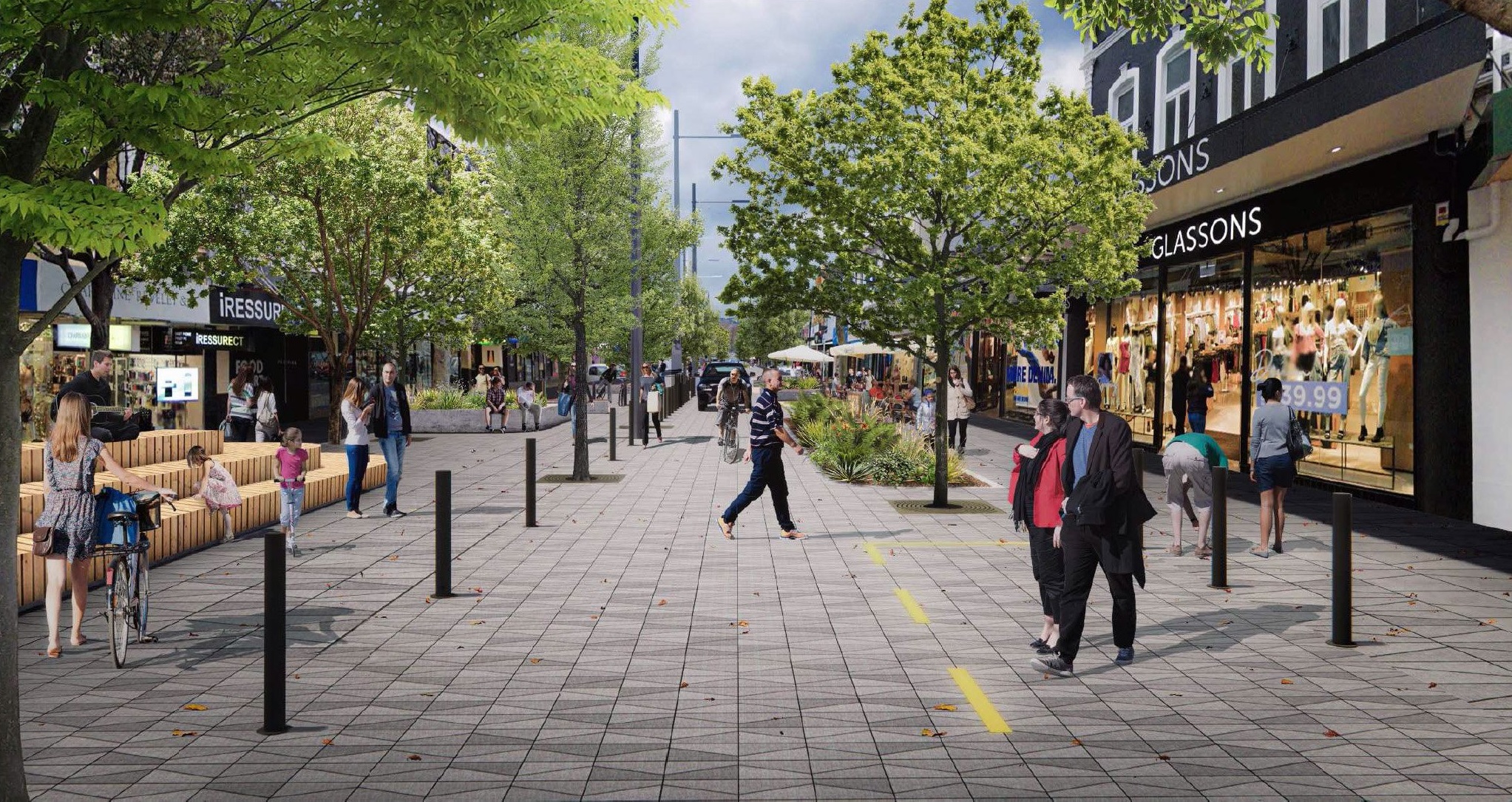 New concept drawings released by the Dunedin City Council show a car, a bike, and a pedestrian sharing a reimagined George St where the kerbing has been removed to allow for increased pedestrian access. IMAGE: SUPPLIED
Dunedin people are passionate about their central business district. So passionate, in fact, they struggle to agree on how to make it better.

Years of heated discussion as to how to improve the Octagon, Princes St and George St have yielded little. Grand plans were gridlocked by self-interest, fiscal timidity and politics. Piecemeal change was favoured over the bold.

Here and there, a cityscape chock-full of potential is a patchwork of stopgaps. Making George St a playground of blue and red dots is just another change that, for many, reinforces the belief ideology and knee-jerkism have held sway for too long.

This has to change, and soon. Titivation will not prepare the city to face the challenges of a future in which the fortunes of downtown Dunedin may be irrevocably altered.

This is laid bare in a comprehensive series of reports prepared to help the city council map out its plans for the central city upgrade. Among them, commercial strategist First Retail Group suggests the CBD is headed for a slump.

The strategists warn pandemic-spooked customers will spend less in town and more online, while changing work practices will mean fewer people will be in the city during the day. This will intensify as unemployment grows, as entry-level jobs dry up and as working hours are cut.

The slump will be exacerbated by fewer domestic and international students studying in the city, and by the long-term hit to cruises, events and conferences. Investment may be replaced by consolidation and rationalisation as credit becomes harder to get and business confidence shrinks. New tenants may be thin on the ground as financial distress leaves more premises empty.

George St businesses have already made it clear they expect a long haul out of a drawn-out recession, but the report guiding councillors makes it clear there were headwinds before the pandemic.

Consumer spending was sluggish last year, at a time the city economy outpaced the national average. On-the-ground surveys found fewer people visited downtown shops during some periods, and that there was a shift to spending on hospitality.

Worryingly, Otago had the greatest increase in online shopping of all regions in New Zealand. Anecdotally, this will have been further reinforced during the lockdown.

The report notes the retail quarter’s position as the city’s pre-eminent shopping area was reinforced by the lack of malls, but that it was being eroded by larger-format retail, independent retail growth and hospitality developments outside the main drag.

A buoyant decade insulated George St from change: there was no urgency to improve the street’s use and economic performance, even as other cities rushed to improve their spaces to maximise their attraction and use.

This must change, and soon. The strategist warns the pandemic will change the size, capacity and motivation of the market drawn to George St. As the report notes, "values will shift, permanently"; the city cannot emerge from the pandemic fallout "expecting success by delivering the same consumer experiences" — the community will expect improvements.

Councillors — and anyone with an interest in the health of the central city — have a significant task at hand. After years of prevarication and provocation, they must ensure the quarter is ready for the future.

On the face of it, the cusp of a recession is a frightening place from which to leap into potentially significant change. Councillors will need to justify the millions of dollars it will cost — and the rates it may influence — as ratepayers struggle during a recession. But as the strategists note, it is also "a window of opportunity" to "collaboratively shape" the quarter alongside the changes businesses will also need to make to meet a changing market, and changing expectations.

Change is coming. The city must be prepared to face it, collaboratively and without surprises.

It's interesting that most of the businesses that are opposed to pedestrianisation of George St. are locally owned 'Mom and Pop' shops but you never hear anything from the big chains like Whitcoulls and Farmers who have experience of retail in other (pedestrianised) cities and towns around New Zealand.

It's also interesting that all the focus is on retail. It's call the CBD for a reason.
It is our primary BUSINESS district.
That means ALL business which includes getting access to the DCC, lawyers, accountants, government departments, planners, architectes, accommodation, hotels, cafes and a myriad of other office spaces.
The council, in it's past wisdom has allowed the construction of mega stores, with heaps of parking that fragmented retailing. The South Dunedin Warehouse and Pac & Save reduced their main street to a collection of second hand stores. The same thing is happening to George and Princess Streets.
Simply turning the area into a 'pedestrian friendly' zone, will only exacerbate current trends.
Like it or not, we need our cars. We need long and short term parking. We are a small dispersed, city that can not afford nor function like a high density, large population city.
We have enormous potential to be a dynamic, attractive, small city but we MUST remain independently mobile.
Make the one way system less congested, free flowing, as well as providing multiple parking facilities would be a major step in attracting business, as well as freeing up the streets.

If they are Mum and Dad shops they stand to lose personally. Whitcoulls and Farmers don't. They are managed in Auckland boardrooms and have no personal 'skin in the game' like many small businesses have who care about their employees and their many years of heritage shaping the character of Dunedin and Otago.

Editorial starts well with some interesting new facts and opinions. However ends poorly with unsupported, confusing conclusions and no clear recommendations.
“Life is like riding a bicycle. To keep your balance you must keep moving.” ~ Albert Einstein
It sounds like good advice but lacks a clear direction.

Dunedin's CBD retail has been on the decline for years due to a combination of the changes to shopping but also due to a lack of investment (landlords and council). Councils in the UK and elsewhere have been buying up their local shopping areas in order to more carefully design and curate the whole experience.