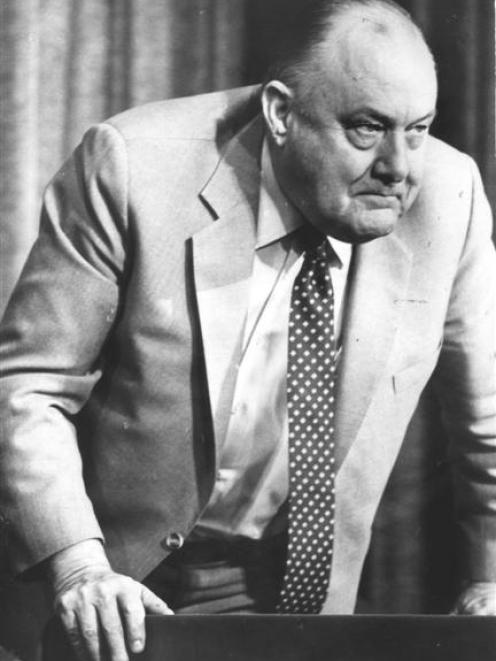 Robert Muldoon
What a difference 39 years and a global pandemic can make.

In 1981, then-Prime Minister Robert Muldoon abandoned New Zealand’s adherence to the Gleneagles Agreement, the Commonwealth-wide agreement to "combat the evil of apartheid", and allowed the Springboks to tour here.

While Australian Prime Minister Malcolm Fraser stayed staunch, even refusing to let the Springboks’ flight to refuel at an Australian airport, Muldoon abandoned the moral high ground, claimed politics should stay out of sport, and pandered to the National heartland by allowing the tour to proceed, blaming left-wing agitators when it descended into chaos.

Rugby was the winner on the day — though, really, it wasn’t.

If Muldoon was still in charge, would he be throwing Covid-19 caution to the wind and going all-in to make New Zealand the host of the Rugby Championship?

A moot point, but what is certain is the New Zealand Government no longer asks "How high?" when New Zealand Rugby orders it to jump.

You can choose a side when reflecting on how New Zealand managed to lose Rugby Championship hosting rights to Australia but it is still a little uncertain as to who really dropped the ball.

New Zealand Rugby points the finger squarely at the Government, highlighting its "inflexibility" around allowing visiting teams to get on the training field in large numbers straight away.

The Government, no doubt with one eye on the election on October 17, maintains it is the bigger picture of public health and not a sporting tournament that must take priority, and points to recent Covid cases within the Pumas as a red flag.

Add in the fact there are doubts over whether the Bledisloe Cup tests in New Zealand can be played — the Wallabies seem sceptical — and you see the message very clearly.

New Zealand Rugby, so used to getting its own way, doesn’t call the shots any more.

The Government’s heart, in many respects, never really seemed invested in this whole process. Fighting two fronts, Covid-19 and re-election, left it reluctant to pull out all the stops for a rugby tournament.

Should we be bothered? Does relinquishing hosting rights to a sporting event right now really matter?

Certainly, the public response has been relatively muted. There are no street protests, no petitions being arranged, no sense this decision is remotely as important as the call over when we can return to Alert Level 1.

Still, this could have been a filip for the nation at the end of a rough year.

It would have provided both a hefty economic boost — though perhaps the $100million is over-egging it — and an injection of positivity, a little bit of buzz, a reward for the sacrifices we have made.

Dunedin could have had a stadium bulging with rugby fans (and their wallets), and Queenstown could have received a massive — and timely — economic boost by hosting the teams.

That it isn’t happening reflects both the political climate and the lessening of rugby as our all-important national game.