After years of planning, multiple council meetings, thousands of social media posts and one sign banning the mayor from a jewellery shop, the multimillion-dollar upgrade of Dunedin's George St is finally set to start.

At the launch of the detailed designs Dunedin City Council chief executive Sandy Graham said she was confident that when people saw them they would be as "blown away" by the plans as she was.

If you look past the somewhat garish Totally Georgeous tagline, the designs look stunning and inviting as pedestrians cheerfully make use of the extra-wide footpaths, full of life in the form of vegetation and art.

Automobiles, once the kings of the road, will be confined to a one-way strip.

To many this is an abomination which will put them off visiting the street and undoubtedly, they believe, lead to the demise of some retailers there.

For others it's a readdressing of a long fixation on the private motor vehicle at the expense of any other form of transport.

Critics, and there are many, argue the council is using the need to upgrade ageing infrastructure beneath the street to push an ideological anti-car agenda, at the cost of existing businesses.

You do not have to look far for places where similar changes have succeeded. 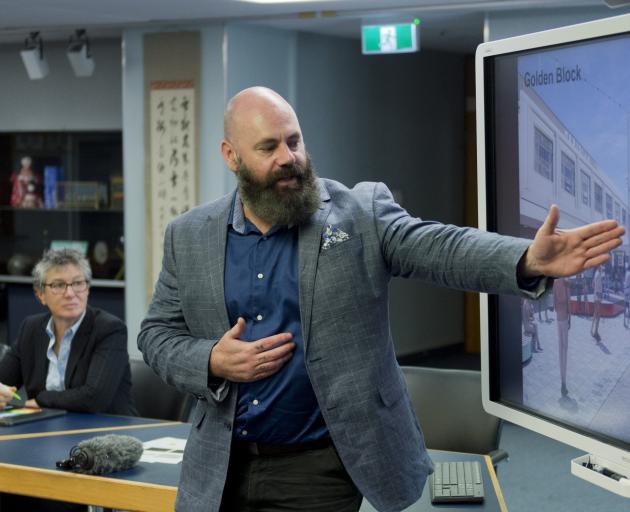 The upgrade to K-Rd, which also had its critics, was touted by the Auckland Council and Government as making the seminal street more pedestrian and cycle-friendly, attractive and environmentally sustainable.

So far it seems to have worked.

Before the lockdown last year a business survey found the street was the city’s best performing business district, with customer spending up 25% following the revamp.

The person in charge of Dunedin’s central city project, Dr Glen Hazelton, says the council is trying to create a vibrant, compelling destination where people will want to spend time and money.

Ultimately, that is where the revamp will succeed or fail and if anyone can get everyone on board to make the $28 million project a success it is Dr Hazelton, best known for his work in driving the revitalisation of Dunedin’s warehouse precinct in and around Vogel St.

The success of that project was down not just to his skills as an urban planner, but also his ability to communicate the need for change and bring everyone on to the same page.

George St is a different beast than a rundown, forgotten part of the city, and it will take all his skill for it to succeed.

For everyone’s sake let us hope he does.

While it will probably be too late and too expensive to substantially reverse the revamp there is no doubt it will be one of the main points of contention at this year’s local body elections.

Two aspiring mayoral candidates, Crs Lee Vandervis and Jules Radich, have already staked their opposition to the upgrades into the electoral grounds.

Mayor Aaron Hawkins will campaign on the revamp as one of his crowning achievements.

What there should be no disagreement over is the inclusion of Ngai Tahu and local runanga in the design process.

For too long the story of Otepoti’s mana whenua has been left out of our public spaces.

Both Dr Hazelton and Ms Graham are at pains to point out how the George St designs reflected the beginnings of a genuine partnership with mana whenua, reflecting their place in the city.

Until the installation of Ayesha Green’s Ko te Tuhono sculpture in the Octagon there was almost nothing in the central city which reflected Dunedin’s mana whenua and their story.

The city’s proud Scottish heritage is everywhere, from the statue of Robbie Burns to the names of our most prominent streets — even the name of the city itself.

There is no reason why these two stories, along with those of the city’s other communities, cannot be celebrated alongside each other.

The George St upgrade is a good place to start but it cannot stop there.

It's a huge mistake but it doesn't matter what anybody thinks. The same people make decisions like this based on what they want. The same people benefit from the decision while the same people suffer. The city is run by the least qualified, everybody knows it. Do whatever you want, the people have given up. It's their city not ours!

Nothing stopping you standing for council Red. Vote Pill!

Actually there is or I would have years ago. So I can only assume that you fall into the "these are the best and the brightest" camp? Or, their decisions represent the "best interest of the people"? For the last 2 years we've been feed a litany of lies about how strong the economy is despite the COVID lockdown. This despite bussiness shutdown and the government printing and providing "free" money. Now we are experiencing record inflation. The inflation will continue and it isn't because of Putin, it's because we have the least qualified running the country. From the top all the way down to the local level, the least qualified. True, the CBD needs to be updated BUT shouldn't the people get a say? Given the economic conditions, is this the time for a major upgrade? Could the money be prioritized for a more needed project? The politicians put their blinders on and move forward disregarding the impact on us. Rates shouldn't be going up given the economy, spending should be going down. Local government should be cost cutting but it's not. That's not good governance John. Given my age and health I can't run for office. We need responsible, honest, capable people...you know any?