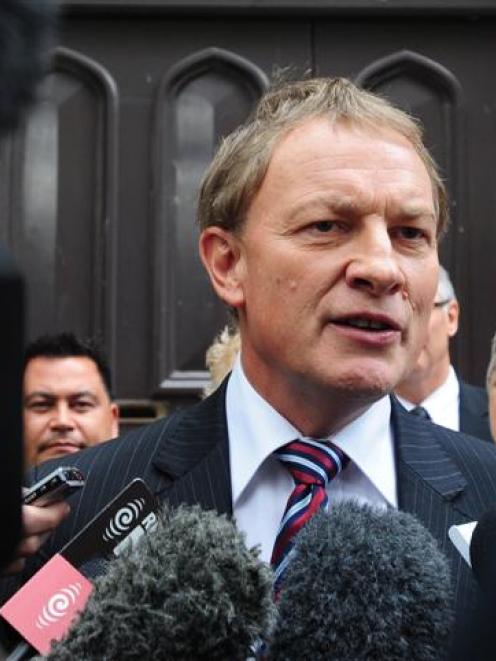 Phil Goff
As if the fiasco surrounding the Darren Hughes affair was not damaging enough, the speculation, manoeuvring and public pronouncements surrounding his possible replacement has ensured the Labour leadership issue remains in the spotlight.

Regardless of the reality or depth of dissatisfaction among caucus members and the wider party with Phil Goff, and his election-winning prospects, there will doubtless be those in the party furious at the needless distraction - much of it self-perpetuated - and those outside it, particularly National Party strategists, who will be delighted at the disarray.

On Sunday morning on television Judith Tizard, the person at the top of the Labour Party list and thus the constitutionally favoured replacement for Mr Hughes, scotched some of the speculation by announcing that she would not be returning to Parliament. The manner in which she did it, however, lent fresh legs to the simmering discontent the party has been at pains to disavow over the recent past. She said that in a conversation with Mr Goff, the Labour leader had said she would be welcome back should she decide to return but that he sounded "like he was chewing on dead rats" as he made the offer.

She was also lukewarm on his leadership prospects. And in a newspaper interview, published on Sunday, she chided party president Andrew Little - who at the weekend stepped down to concentrate on his forthcoming election campaign in the New Plymouth electorate - for publicly favouring list member and Manurewa candidate Louisa Wall, saying it was not "particularly helpful".

She is right: from a political management perspective it was unwise - and constitutionally questionable - of Mr Little, as party president, to appear to be exerting pressure from the sidelines, just as it was either rash or calculated of him to voice publicly his irritation, and thus implicit criticism, at Mr Goff for not having informed him of the Hughes police investigation. As much as he insisted at the weekend that the Labour Party had "more important matters to discuss" at its national council meeting, Mr Little himself helped fan the flames of discontent with Mr Goff's leadership through his public utterances, and quite probably raised speculation of his own ambitions in his intervention in the Hughes-list matter.

For private displeasure, at least, he could be forgiven. What had Mr Goff been thinking in not informing Mr Little of an incident that had the very real, if not inevitable, propensity to break into a damaging scandal?

For that matter, what had he been thinking in not immediately taking control of the situation and managing it proactively - by standing Mr Hughes down pending the outcome of a police investigation?

While there is much that remains unknown about this whole affair - including factors Mr Goff may have taken into account which are not yet, and may never be, in the public domain - his indecision gave friends and foe alike opportunity to make hay.

All of this may ultimately be irrelevant to the party's prospects.

But those who say Labour is languishing in the polls and thus is hardly in a position to threaten the incumbent administration in the November election may misconstrue the fickle nature of political allegiance and the vagaries of MMP. Were Rodney Hide to lose Epsom and Act New Zealand to disappear from Parliament, this would leave National with a weakened Maori Party as its major ally.

Were the Green Party to perform well, Labour to increase its vote only 3% or 4%, and the political joker in the Kiwi pack, Winston Peters, to re-emerge with a reinvigorated New Zealand First party, the election could in fact - and notwithstanding Prime Minister John Key's enduring popularity - be run on much narrowed odds.

Whether Labour can claw back its own support is, however, open to serious question: an essential part of aspiring to power is to acquire and maintain the confidence of the public, not only in the policies promoted but in the manner of conducting itself publicly. In recent weeks, by these measures, the Labour Party has failed. If it is to provide National with credible opposition in this year's general election, it will, to redeploy and paraphrase a volley from the departing Ms Tizard, have to "up its game".