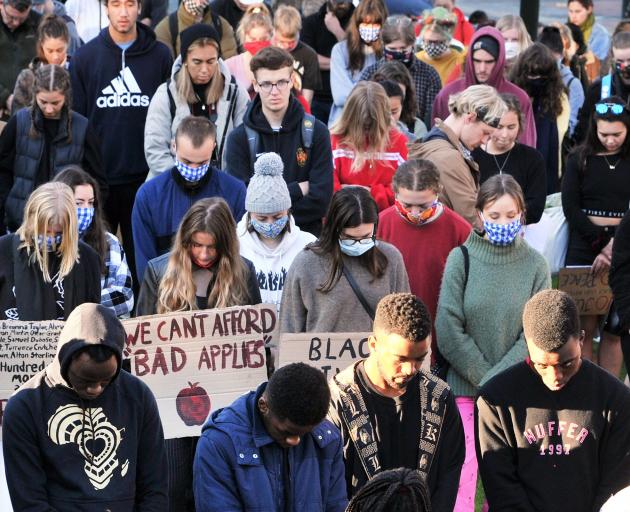 Hundreds of people gathered in Dunedin’s Octagon to support the ‘‘Black lives matter’’ movement in the United States. PHOTO: CHRISTINE O’CONNOR
Another death of an unarmed African-American in police custody, more calls to end systemic racism and white supremacy, and another wave of protests met with threats and violence.

The United States is in the grip of a generations-long pandemic of racism, tribalism and raw hatred. It is as it has always been in a country in which unequal attention is paid to civil rights.

We have had a week and a-half to understand the flashpoint that led to the sustained, mass protests that swept the United States and many cities around the world, including Dunedin.

We have had time to watch the video of George Floyd’s death beneath the knee of a Minneapolis policeman; to hear him pleading for air, and to hear bystanders urging police to let him breathe.

We have learned he was detained under suspicion of passing a counterfeit $20 note, a low-level, non-violent crime. A court will consider how he came to be lying, handcuffed, beside the police cruiser but the prosecutor’s report says the white officer had his knee on Mr Floyd’s neck for eight minutes and 46 seconds.

Countless interview subjects have told us this kind of brutal indifference and outright racist disproportionality happens every day in the United States.

The Black Lives Matter protests memorialised Mr Floyd as they made clear the deep sadness and frustration, rage and hopelessness that many people of colour feel — and live, daily — in a racially and economically divided America.

This, too, is not new — but the socio-cultural environment in which the protests happened is quite different to what it was in years before. Previously, leaders at least made placatory noises and offered vague promises to make things better. This time, a bellicose and defiant President Donald Trump threatened to use the military against his citizens. Asserting his love for the law, he sanctioned the use of tear gas to clear lawful protesters from a church yard, to pose for a photo.

Incendiary statements trumped calm compassion. Observers say there was no sense Mr Trump wanted to understand what the fuss was about, or to seek an enduring resolution. In this way, his response seems no different to so many aspects of his presidency.

What is happening in the US is having an effect in New Zealand, too. Protests on Monday supported the struggle that ought not to be happening in what used to be considered the land of the free, but also highlighted the systemic racism in our institutions, and the overt and casual racism in our communities.

The American protesters point to a system that arrests and imprisons people of colour disproportionately. Here, police and prison statistics point to the same thing and here, people are again asking New Zealanders to accept the uncomfortable truths introspection will bring.

Meanwhile, healthy introspection seems unlikely in the Oval Office, where Mr Trump will be mulling an election campaign almost certainly underpinned by the messages of division that characterised his last campaign, and the years that followed.

A just-released Ministry of Social Development survey of businesses that received the Government’s wage subsidy provides insights into how the subsidy, wage cuts, reduced working hours, redundancies and deferred spending helped them weather the Covid-19 response. It also provides data as to what they may do in the coming months.

It found 89% of respondents believed the wage subsidy meant they could keep operating for the foreseeable future — but it also found many thousands of employers capable of applying for taxpayer help were nonetheless unwilling to describe how taxpayer money helped their business.

The survey of 90,000 businesses had a 25% response rate. This might be statistically reasonable, but it is far from reasonable in context. Taxpayers have 10.99 billion reasons, and counting, to expect better from those getting such significant, necessary, taxpayer support.

"police and prison statistics point to the same thing and here". The argument falls apart when we consider the lower incarceration rates of asian and pasika populations. Maori used to have a lower incarceration rate than Pakeha but this changed as Maoris moved into cities and ended up isolated from family, communities and in poverty and living essentially in ghettos. I can imagine easier for politicians to stigmatise institutions as racist rather than actually try and solve the problems.

Individuals are racist if they find fault on the grounds of race. The City wanted Maori populations as a labour force. Institutions did 'institutional discrimination'.

"The City wanted Maori populations as a labour force."
They also advertised extensively, to get whoever was willing to come, to build the labour force.
Is it racist to focus on one group and ignore all the others?
Is it racist to focus on the group that ran the city at that time and condemn them?
At a time when it has never been a easier to live a prosperous and peaceful life, this focus on identity politics is the underlying cause of division and discontent !
Leftist outrage does no one any service but the elitists that ferment it.

Are those who identify structural problems 'leftist'? Are champions of the way things are oblivious to the inequities of 'white' hegemony?

Sadly, everybody is a racist "Hull"...everybody has a bias that can be considered racist, sexiest, homophobic etc. Rather than another pithy 1 liner about those of us "oblivious to the inequities", how about a structured response with some type of solution? When 70% of New Zealand's population is white, how do we get rid of what you call the "inequities of 'white' hegemony?" What's your solution? Feel free to use ALL of the 1200 characters rather than your standard 125 characters in response.