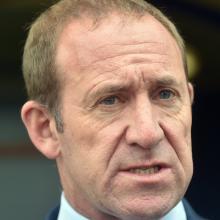 Andrew Little.
Poor Andrew Little. One cannot help but feel some sympathy for the embattled leader of the erstwhile great political party.

Politics can be brutal and unforgiving at worst, thankless at best. Seeing the Labour Party leader struggle to gain traction, listening to him doggedly repeat the same droning  mantras, being witness to what feels like the death throes of the country’s main opposition party is no doubt gleeful for those on the other side of the political spectrum, but for anyone who believes in the importance of freedom of choice, it is a sorry state of affairs indeed.

Mr Little’s admission he talked last week to senior colleagues about whether he should stand down as leader  — just eight weeks from the September 23 election —  is a gross error of judgement and further confirmation of the party’s and its leader’s inability to rise to the challenge of forming a viable opposition, let alone government.

The discussion came after Labour recorded its worst One News Colmar Brunton poll result in its history — putting the country’s main opposition party at just 24% and Mr Little at just 6% in the preferred prime minister stakes  (up 1 percentage point to at least tie with his deputy, Jacinda Ardern).

Having committed to stopping the revolving door of recent times, Labour settled on long-time trade union leader Mr Little at the end of 2014 — following the party’s defeat in the general election (under David Cunliffe).

Only a party with a death wish would sanction a leadership change so close to an election. But only a party so out of touch with political reality would sanction disclosing that possibility to voters — unless it was testing the water. If Mr Little was hoping to ride on the coat-tails of Green Party co-leader Metiria Turei’s recent beneficiary fraud disclosure success (which has put her party at its highest polling of 15%)  that has failed. Ms Turei’s disclosure was undoubtedly a gamble, but it appears to have paid off, largely because her story resonated so personally with many.

Mr Little has been upfront, but his reluctance to then discuss details of the discussion — despite being the one generating the news cycle — was self-defeating. All that has been achieved, in fact, is to demonstrate Mr Little is doubting himself, the party is desperately contemplating all options, and has probably only decided to let its leader "fight" on as it is the marginally better of two punishing options. It is a fail/fail situation of its own making.

This continues to frustrate traditional Labour voters, and undecided voters, too. Whatever worthwhile policy announcement is made — and there have been some — a wound is almost immediately self-inflicted.

Mr Little yesterday bemoaned the lack of media coverage he has been receiving, but then spent precious air time repeating his oft-used lines about the people throughout the country who are constantly telling him they want change.

Yet, if the voices are that deafening, the party and he must take equal responsibility for failing to turn that sentiment into potential votes. Both have consistently failed to gain momentum despite the plethora of issues that should be bread-and-butter stuff for a left-wing party. Instead, the National-led Government has taken up "social investment", and if it cannot solve the housing crisis, how can a hapless Labour even hope to try?

While Mr Little may have united the Labour caucus, the party has lost its working-class connections, ditched most of its truly left-wing policies to become another centrist party, alienated core voters, confused and frustrated others, and done nothing to inspire new ones.

It has not learnt the lessons of Trump and Brexit and has a serious integrity issue — not helped by its own leader admitting he would lack credibility as leader of any opposition that might just be cobbled together on current combined polling.

Constant bickering with the Greens has done little to engender confidence in the Memo of Understanding or Labour’s ability to work with its largest natural coalition partner.

If Mr Little is correct and voters do want a change, they clearly still have no confidence in Labour — and its sadly uncharismatic leader — to deliver it.