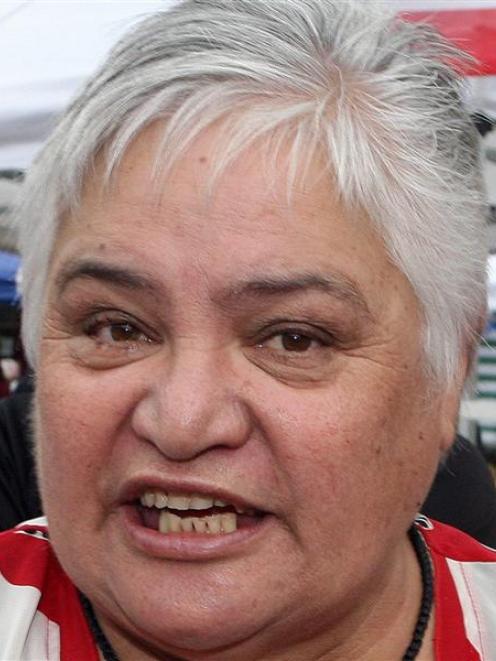 Tariana Turia. Photo by NZPA.
This week's report into the health of Maori children tells a depressingly familiar tale: as in statistics for educational achievement and employment rates, the disparities between Maori and the rest of the population are unacceptably wide, with Maori at the bottom of the heap; conversely they feature prominently and well above other New Zealand ethnicities for crime and punishment. What the latest report indicates is just how early on the disadvantages begin to accrue.

The report, "The Health of Maori Children and Young People with Chronic Conditions and Disabilities in New Zealand", is the first in a series commissioned by the Ministry of Health and produced by the New Zealand Child and Youth Epidemiology Service at the University of Otago. It is being billed as the first report to provide "a comprehensive picture of disability and chronic conditions in Maori children and young people, reinforcing the importance of prevention, primary care and disability support services for Maori children and young people".

Even by the standards to which the country has become accustomed, the evidence it provides of how poorly young Maori fare in relation to certain debilitating diseases and conditions is shocking.

The research on which the report is based, for instance, found hospital admissions for young Maori (aged under 24) for rheumatic fever were 23 times higher than non-Maori admissions. That is a disgraceful statistic and is clearly evidence of deep-seated structural inequalities in New Zealand society. More directly, it is further evidence of the correlation between factors such as poor housing, childhood poverty and chronic disease.

Rheumatic fever is a delayed inflammatory reaction that develops in response to a streptococcal throat infection. It mainly affects children between 5 and 14 years old and a bad case can lead to permanent heart damage - rheumatic heart disease is a progressive condition resulting in damage, scarring and deformities of the heart valves. Equally, rheumatic fever can affect the joints, brain, skin or subcutaneous tissue.

It is a serious disease and the tragedy highlighted by this research is the degree of disconnect between sections of the - mainly Maori - population and the state health services. It is not an especially difficult disease to diagnose or treat. The former can be achieved by routine swabs for "strep" throat, and the latter by antibiotics, occasionally anti-inflammatory drugs and bed-rest.

Prevention is, of course, eminently more satisfactory than cure, and addressing factors such as poor quality housing - cold and damp - overcrowding, poor nutrition, and lack of access to primary health care is key to getting on top of the problem.

Alleviating poverty, in particular child poverty, will go a long way to dealing with it. The age-old and often contentious question is how?

This week, Children's Commissioner Dr Russell Wills announced the formation of a group of experts to find solutions to child poverty. Another group, another set of reports?

In what practical manner will this help alleviate what is by now a well-recognised problem?

Dr Wills' group comprises a number of academics, including Prof Mark Henaghan, Dean of Law at the University of Otago, and Prof Richie Poulton, director of the Dunedin Multidisciplinary Health and Development Research Unit; it includes sociologists, educationists, accountants, policy analysts, doctors, business lobbyists and charity workers. It is not short of intellectual or analytical firepower.

Its conclusions and recommendations will be presented to the Government by the end of the year in time to feed into the ministerial committee on poverty - which met for the first time earlier this month. Part of the confidence and supply agreement between National and the Maori Party, the poverty committee is made up of Bill English and Tariana Turia as well as the ministers of health, education, social development, housing and Maori affairs.

On its announcement in December last year, Mr English said its focus would be on getting the best results from the hundred of millions of dollars being spent on social service delivery. It would not be about "hand-wringing or writing strategies". It is to be hoped that will indeed be the case.