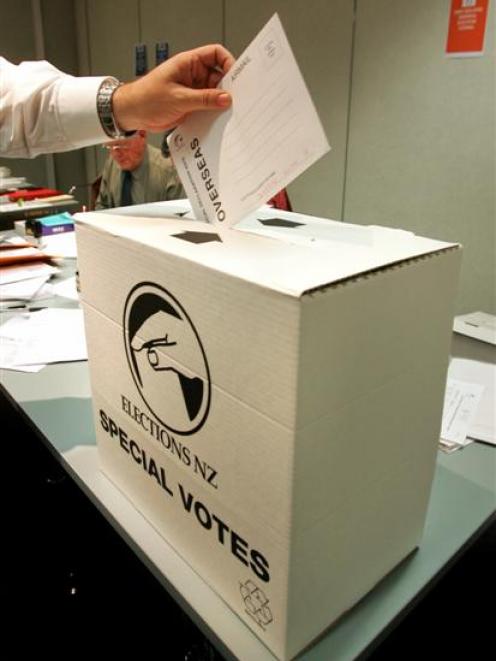 There may be, as the party's deputy leader, Bill English, claimed to National's southern conference last month, "quite a range" of election policy from his party in the public domain already.

He itemised education, law and order, broadband, the voluntary sector.

There was no need to be concerned about calls from other parties to release policy, he told delegates.

"We pick the timing - not Labour, not the media, not the public."

These are words the Prime Minister, Helen Clark, should acquaint herself with, since she believes the opinion polls will not show the true level of her Government's support until National reveals its policies and says how it will pay for them.

It may be quite a wait.

Mr English, who is in charge of policy within the party caucus, told his troops some of it will not be announced until quite close to the election, which may be four or five months away.

"You are just going to have to put up with that."

Mr English, and his party colleagues, are being sensible - up to a point - and Miss Clark, as an experienced pollical strategist, must know it.

This will not, however, lessen the calls for National to spill its policies long before the election.

The polls suggest Labour has lost any traction it hoped to gain from an electorate with its tax-cut budget.

Since, according to the Treasurer, Michael Cullen, there is nothing left in the kitty to spend without borrowing, it can reasonably be assumed there will be no new attempts to win voters to Labour's cause with their own or borrowed money.

Labour will have to fight the election on its record and on the assessment by voters of its managerial skills.

National also believes, wrongly, that policy detail is not so important to voters as the projected style of government; in Mr English's words, "the signal of direction and character of the government".

But style can never be better than substance.

The dangers from National's strategy may be represented by individual MPs "interpreting" policy discussions as policy, as recently happened with climate change, requiring rapid back-pedalling by the party's leaders, and giving political opponents the floor to speculate - until defensive measures are forced.

On the other hand, National has achieved a consistent and high level of support in opinion polling all this year without troubling voters with much policy, a successful strategy on its own terms.

So the question everyone should be asking is: why is National scoring so well in the opinion polls? It cannot be because of the party's policies, since so few have been released.

Nor can it logically be because National's leader, John Key, has aligned himself with so many of the coalition Government's own policies, from keeping KiwiSaver and the pre-funded superannuation scheme, to delaying any asset sales for its first term.

But now that the Clark Government has played its personal tax hand, there is no good reason for National not to disclose the details of its own tax policy, including whether it intends to reform the tax system with a flatter tax scale or continue with Labour's progressive tax system.

Most importantly, it needs to explain how it would fund its policies, including tax "cuts", if it expects less revenue, for there is no surplus left in the accounts.

Mr Key attempted to suggest a course recently when he said "National will direct spending away from low-quality programmes that push up inflation towards frontline services like doctors, nurses, teachers and police."

This is gobbledegook, and all too typical of Mr Key; it is one of the reasons why voters still complain they do not know what National's leader stands for.

If they read his speeches they will learn a little more, but it is not a particularly illuminating experience.

Having remodelled Don Brash into something he was not and paid the penalty, National's strategists seem determined to make another mistake by refusing to empower Mr Key to stamp his own authority and explain his agenda for governing.

Mr English told party delegates in Dunedin, National does not want to "kill [voters] with detail, but we do want to make clear what our direction is.

But this patronising recipe reads as if it was written by an organisation determined to avoid confrontation or contention at all costs, and is a dishonest basis for seeking high office.