Not too late to keep promise 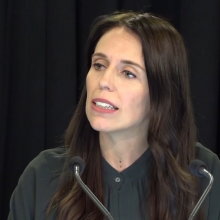 Jacinda Ardern
The Prime Minister stands accused of breaking a promise and there would seem some foundation in the accusation.

Labour campaigned on policies aimed at improving the lives of children and, once elected, the focus on social policy was heavy: pledges to end child poverty, provide affordable housing, change parts of the welfare system, improve health delivery, lift the incomes of the "working poor".

The Stand Children’s Services Roxburgh children’s village — tasked with changing the lives of vulnerable children who have suffered trauma — is sadly familiar with the social and health ills Jacinda Ardern has pledged to fix.

The village’s possible closure, announced last month because of a shortfall in funding, flies in the face of the promise of social focus from Ms Ardern, and the Prime Minister and Minister for Children, Tracey Martin, came in for harsh criticism at a public meeting held in Roxburgh last week to try to stop the closure of the village.

The Labour-led Government said it was serious about the children of New Zealand, but instead had "fallen at the first fence", Teviot Valley Community Board chairman Raymond Gunn said.

The news last week the Government would not bailout the village has come second-hand, through Central Otago Mayor Tim Cadogan, who, with Clutha Mayor Bryan Cadogan, staked out the Prime Minister for three days in Wellington last week, trying to meet her to halt the closure.

They ended up getting a 25-minute teleconference with her, and Ms Ardern confirmed there would be no extra money for the Roxburgh village, the Cadogans said.

Tim Cadogan said he was "heartbroken", and the fight of the southern mayors and Central Otago community to save the village — previously known as the Roxburgh Health Camp — had "always been for the kids".

Ms Ardern has been conspicuously silent about the village, refusing to comment about its future, passing the buck instead to Mrs Martin.

The Government should be revisiting its decision not to bailout the village, and looking harder at what the village provides.

The Roxburgh village helps 380 children a year, and they are some of the nation’s most vulnerable.Luckily, most people cannot imagine the kinds of trauma that means a child needs to be sent to an intensive, residential, wrap-around service such as the Stand children’s village.

But for the children who have ended up there, through no fault of their own, the village can literally change lives.

Ms Ardern’s Government has announced various initiatives with a social focus. These policies will hopefully help some of the root causes that may lead a child to end up in a situation where they require an intensive, residential, wrap-around trauma service.

But why take away that very service?

The Roxburgh children’s village is still needed by the children in the village’s large catchment, which includes everything south of the Waitaki River.

Southern social service agencies have said there is no equivalent to the residential Stand service for the children who need it.

Stand chief executive Dr Fiona Inkpen says if the Roxburgh village closes, children will suffer, and fall through the cracks.

But all are also reminding of the loss of 31 jobs in Roxburgh if the children’s village closes.

The Government has announced intentions to support the regions, including through the Regional Development Fund.

The Roxburgh Stand village may not fit the criteria for such a fund, but the Government could and should revisit its decision not to keep the village going, both for southern children, and the Teviot Valley community and economy.

It is not too late for Ms Ardern to keep her promise to focus on child wellbeing.