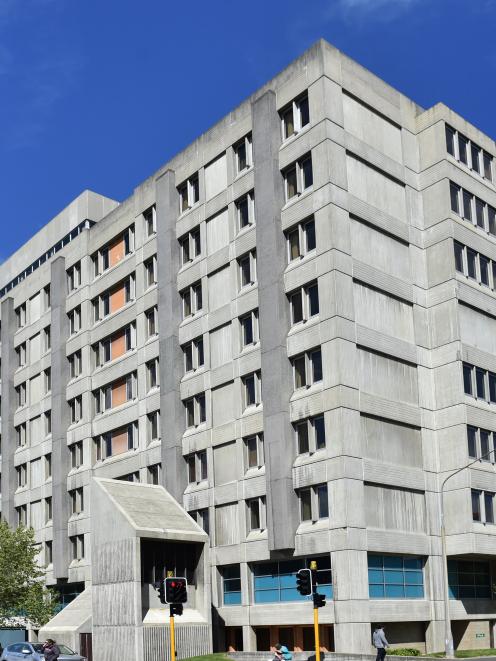 Dunedin Public Hospital. Photo by ODT.
If the public has all but given up on the prospect of a major redevelopment of Dunedin Hospital, it is now time to start paying attention.

After years of dithering and empty promises, Health Minister Jonathan Coleman has told bureaucrats to hurry up and get on with it.

Dr Coleman at first seemed as sanguine as his predecessor to let the $300 million redevelopment dawdle.

Despite the worried murmuring of Treasury, Dr Coleman is proceeding at relative haste, at least by the standards of such things.

It is clear the rebuild, controlled by a separate group of political appointees from the commissioner team, will be the force that reshapes southern healthcare.

Dr Coleman's instinct to speed up the project is right, but he must not allow officials to dispense with proper process.

The rebuild is being planned out of the public eye while the broad parameters are being set for what will be built.

Compounding the lack of public input, there are no longer pesky elected board members to ask questions at public board meetings.

Rebuilding a hospital means compromises, trade-offs, competing agendas, and guesswork about what is needed in the coming decades.

In Dunedin, there is the vexed question of the relationship between Dunedin Hospital and the Dunedin School of Medicine.

That relationship appears to be eyed as a potential problem by officials, judging from a strategic rebuild plan that dropped into the public domain in its final form this month.

The document is heavy with implied criticism of the Dunedin medical establishment for hogging resources and holding back the region from moving to a generalist, rural-friendly model.

The report makes pointed comment about work arrangements that involve the private sector, which has created the perception of "opaque'' working arrangements in some instances.

Doctors who work in both the public and the private sectors must be held to account in this respect, but it is unclear just why this rebuild document is considered the vehicle to do so.

More materially, the report points to the need to put wards on to a generalist footing, rather than having myriad separate specialist wards.

This will have a major impact on how clinicians work, but just what it means for patients is unclear.

Dr Coleman appears to accept that neurosurgery must stay in Dunedin. But vigilance will be needed to ensure that outcome is realised.

Six years ago, the neurosurgery campaign persuaded the powers-that-be that a cookie-cutter approach to providing services in the South Island is unacceptable.

The neurosurgery service uses the relationship with the medical school to ensure procedures can be provided in Dunedin.

That is the sort of thinking that the group planning the hospital needs to employ.

Too often, input from the public is viewed as an impediment to efficient planning.

In Wellington, there is wariness of the public support southern doctors enjoy.

That Dr Coleman did not see fit to appoint a southern doctor to the Southern Partnership Group that controls the rebuild was telling.

Just a year out from a general election, the Government will be hoping the rebuild does not become controversial.

The Labour Party views SDHB as a weakness for the Government.

Labour can play a valuable role holding the Government to account, but it should not use the rebuild just to score political points.

Dunedin List MP Michael Woodhouse's apparent lack of interest in the project is unfortunate. As a former chief executive of Mercy Hospital, his insight and experience would be useful.