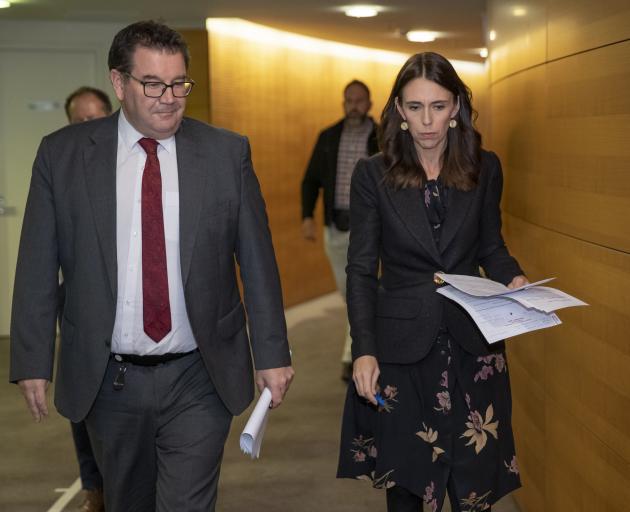 Grant Robertson and Jacinda Ardern. Photo: Getty Images
New Zealand has had more than a week of Covid-19 shutdown, but our leaders are already looking much further ahead.

As well as keeping the balls aloft in the complicated juggling act which is preserving as much of the New Zealand economy as possible, Finance Minister Grant Robertson last week shared with the parliamentary select committee examining the Government’s Covid-19 response some of his thinking about what might be left standing amid the wreckage.

In an analysis strikingly similar to that of the committee’s own expert witness, economist Shamubeel Eaqub, Mr Robertson laid out his expectation that a "reset of macroeconomic settings" would be required post Covid-19.

In blunt terms, don’t expect business as we knew it to be back any time soon.

Mr Robertson said New Zealand would need to consider five broad points as it looked to recover from the expected recession and higher unemployment which Covid-19 will leave among its legacies.

In no particular order, the country had to reconsider what it should make and do; what institutions deserved special support to get back on their feet; the role of the State in the economy; how international trade should be carried out, and how the financial system should work.

Points one and four will be of particular interest for the South, with an economy which just a few weeks ago was largely dependent on agriculture exports and tourism.

While international freight routes remain open, the public health requirements obligatory to prevent the spread of Covid-19 means free trade is not as free as once it was.

Primary produce should still be in demand, but will our trading partners be able to afford our goods? What producers will still be in business to provide them?

International passenger air travel will not return any time soon — flights from Australia to Dunedin are already a thing of the past thanks to Covid-19, and Chinese tour parties or American cruise ship passengers will not be seen taking selfies outside Dunedin Railway Station any time soon.

Operators in the regional tourism hubs of Queenstown and Wanaka have heard dire predictions that it could take 12-18 months before they will be offering bungee-jumping or skydiving to visiting backpackers and adrenaline junkies.

Where the State fits in all this may be up for debate. Free market advocates have already decried attempts to prop up businesses which may have been doomed to extinction regardless of a pandemic.

However, the Government seems to have already made up its mind, with Regional Economic Development Minister Shane Jones having called for developers to submit infrastructure projects for consideration once Level 4 is a thing of the past.

A big Government spend-up on building projects is not a new idea for how to get out of a recession, but it may not be as easy as Mr Jones waving his provincial growth fund pixie dust across the land.

Fletcher Building, one of New Zealand’s largest private sector employers, is trying to convince staff to take pay cuts of up to 70% in a bid to keep the company afloat during the lockdown period.

With other construction firms no doubt mulling over taking similar steps, it is a live question how much of the infrastructure sector will remain to tender for such projects in, hopefully, a few weeks time.

This has enormous ramifications for Dunedin, which will be hoping its own major infrastructure project, the Dunedin Hospital rebuild, proceeds as expected.

Who knows how many contractors and subcontractors will be available for the $1.4 billion project?

The scope, size and cost of the new hospital remained undecided at the time Level 4 descended upon us.

Although the money for the hospital was ring-fenced in last year’s Budget, there may well be a temptation for some to say that was then but this is now.

One suspects Dunedin North MP David Clark, who campaigned to rebuild Dunedin Hospital, would do all in his powers to preserve the project, but there may well be fresh attacks on its scale and services to be provided.

It would be a shame if that were so, for if the past week and a-half has taught us anything it should be the critical importance of an efficient and well-funded health system.

"for if the past week and a-half has taught us anything it should be the critical importance of an efficient and well-funded health system."
Time for us to learn from other countries instead of our inward political, ideological driven games.
We have world renowned medical and dental schools. It has always been an aspect of the plan to make part of the hospital for teaching.
We have some excellent hotels, that will be sitting idle for some time to come.
We still have a massive demand for elective surgery, cancer treatment and goodness what else throughout the country.
We have a national airline massively under utilised.
Auckland has massive resource constraints on it's hospitals.
Why don't we work towards solving these issues by providing medical services nationwide, with what we have.
Many hospitals overseas are associated with hotels that provide postoperative care at greatly reduced cost than a hospital can.
This could be the new normal.
The new hospital could be reconfigured around this model, providing more than just regional services, at a lower cost to the whole country.
The vulnerability of large cities, as far as supply and distribution is becoming very evident.