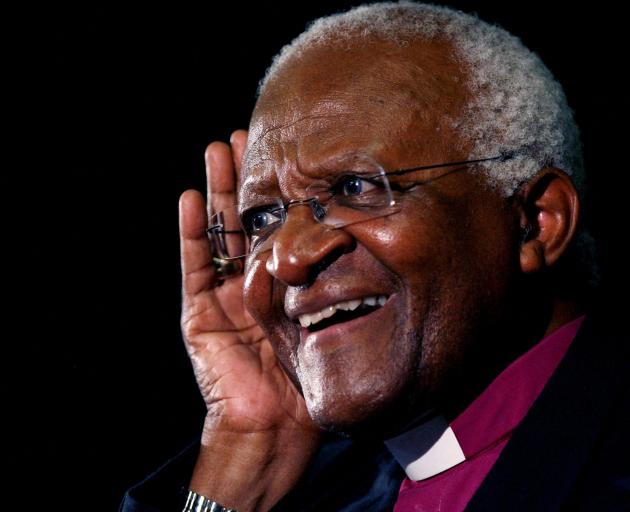 Desmond Tutu. PHOTO: REUTERS
Some people seem so imbued with a zest for life, it is hard to imagine them dying.

South African Archbishop Emeritus Desmond Tutu, awarded the Nobel Peace Prize in 1984 for his non-violent fight against apartheid, was one such man. He died this week at the age of 90.

It was not surprising to hear a mourner in his home country say his death was like the sun going down in the middle of the day.

This irrepressible, feisty, diminutive bundle of energy, with his ever-ready laugh, was unforgettable, even though in recent years he was mostly out of the public eye.

His global reach was illustrated in the tribute from the Archbishop of Canterbury, Justin Welby — "in parts of the world where there was little Anglican presence and people weren’t sure what the Anglican Church was, it was enough to say ‘It’s the church that Desmond Tutu belongs to."

He began his working life as a schoolteacher in the 1950s but became frustrated that education for blacks was seen as preparing them to be servants.

He left teaching to become an Anglican priest and by 1975 he was the Dean of Johannesburg. He used his church standing to speak out against apartheid, calling for sanctions against his country in 1978 when he was Secretary-general of the South African Council of Churches. He became the first black Archbishop of Cape Town in 1986.

In New Zealand, where the anti-apartheid movement was gathering steam, he became a familiar figure on our television screens.

And, in 1983, when the then Bishop Tutu was on a speaking tour of the country, the power of his message hit home during an unscheduled court appearance. Activist Hone Harawira, defending himself against charges arising from protests at the final Springbok match at Eden Park during the controversial 1981 tour, called on him to be a witness.

As then member of Parliament Mr Harawira told the House in 2007, when Bishop Tutu walked into the courthouse "the whole world stopped".

He asked the bishop to tell the court what apartheid was. "For the next 20 minutes, in a quiet and humble voice, Bishop Tutu proceeded to describe apartheid through the eyes of one who had been forced to witness the terror imposed upon his people — the degradation, the humiliation, the pain, and the death. As he spoke, we could have heard a pin drop".

When Bishop Tutu had finished his testimony, all in the courtroom, apart from the judge, stood up to acknowledge the man and his message, Mr Harawira said.

It was Archbishop Tutu who was by the side of African National Congress leader and future South African president Nelson Mandela when he gave his first public speech after 27 years in prison.

Later, the archbishop headed the Truth and Reconciliation Commission, which examined atrocities from the apartheid era and took a restorative justice approach. It was both praised and criticised. The ANC did not appreciate his refusal to go lightly on its excesses.

But Archbishop Tutu held fast — “I have struggled against a tyranny. I did not do this in order to substitute another.”

Archbishop Tutu, with his unwavering Christian faith, took moral rather than political stands, once saying it was easier to be a Christian in South Africa than anywhere else because the moral issues were so clear.

In his later years he was outspoken on a number of issues involving human rights and freedoms, including Israel’s treatment of Palestinians, assisted dying, rights for LGBTQ+ people, and child brides.

"If you are neutral in situations of injustice, you have chosen the side of the oppressor. If an elephant has its foot on the tail of a mouse and you say that you are neutral, the mouse will not appreciate your neutrality."

Worth remembering, as the world pauses to mark this remarkable man’s life.