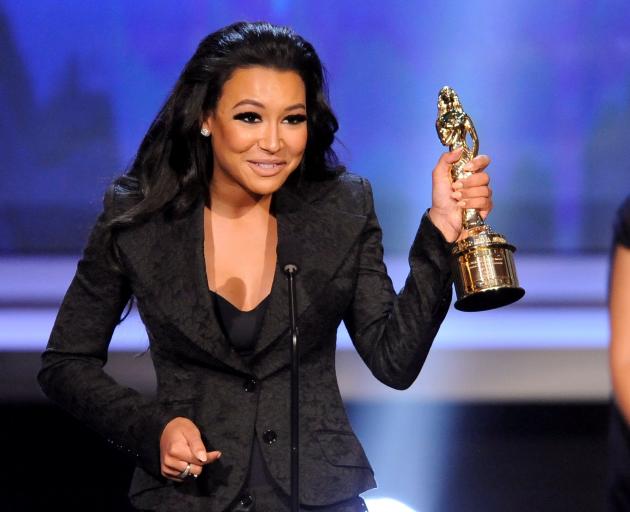 Naya Rivera accepts an award at the National Council of La Raza ALMA Awards in California in 2012. PHOTO: REUTERS
On Monday, the body of actress and singer Naya Rivera was recovered from Lake Piru in California, where she had gone missing while on a boat trip with her young son on July 8. It was the news that I, along with countless fans, friends, and family members had been dreading to hear.

According to the Ventura County Sheriff’s Department, in her final moments, Naya acted desperately and "mustered enough energy to get her son back on the boat, but not enough to save herself".

Very rarely am I this affected by the death of someone I have never met. But Naya Rivera had an indelible impact on my formative years, and I’m struggling to articulate why I have been left reeling. She was only 33, incredibly talented, with no doubt a dazzling future ahead of her. Of course, my sadness is nothing compared with that of her family and loved ones, and my heart aches for her 4-year old son, Josey.

Naya Rivera (1987-2020) was an American actress, singer and model, best known for the feisty cheerleader she portrayed on Glee. While she is so much more than this character, it would be a disservice to ignore the legacy she created with the role of Santana Lopez. For many young people, especially queer women of colour, Naya Rivera allowed them to see an integral part of themselves celebrated on screen.

LGBTQ+ issues were absolutely taboo in my house. The most I learned growing up as a young queer person was that I would one day burn in hell for my nature. I also learned that, did we not live in the 21st century, I would most likely be stoned for my sins, and deservedly so.

LGBTQ+ representation in the media did not exist for me, excluding fleeting moments, snatched when my Dad had left the house to visit his parishioners and I could use the laptop in his study to watch clips of the Glee cast performing my favourite songs.

Santana’s relationship with her best friend (and later girlfriend) Brittany was far more relatable than most other contemporary queer relationships on TV. Brittany and Santana were regular high school girls — albeit obscenely talented at singing and dancing.

But they had no superpowers; nor were they vampire hunters or teen detectives being hunted by a mysterious serial killer known only by the letter "A". Instead, the small but important milestones Brittany and Santana shared — a first kiss, a first shared dance, a first "I love you" — seemed almost achievable to my teenage self. Moreover, Naya was simply dazzling. She stole every scene she was in, bringing to life a strong, fiercely loyal, sharp-witted and three-dimensional lesbian character.

As ridiculous and over-the-top as it often was, Glee was an important part of my teenage years. It was at times silly, strange, and plain unbelievable, with its fake pregnancies, spontaneous and highly-choreographed dance numbers in the school courtyard, inappropriate behaviour from Spanish teachers, and school riots stemming from the removal of tater tots from the cafeteria menu.

But I loved the music, I loved the mix of characters, and I loved the awkwardness and sheer audacity of the show. Most of all though, I loved Santana Lopez. I admired her fierceness and confidence, and deeply related with the way Santana swallowed her sadness in the face of her disapproving and homophobic family.

I know I am not alone in feeling this way. In the five days since her disappearance, many in the LGBTQ+ community have expressed how much Naya’s portrayal of Santana impacted them personally. Rivera’s co-star, Demi Lovato, wrote: "The character you played was groundbreaking for tons of closeted queer girls (like me at the time) and open queer girls, and your ambition and accomplishments were inspiring to Latina women all over the world."

According to Glee co-creator Brad Falchuck, the show writers first conceived of the Santana-Brittany romance idea as a joke, in his words, a "goof". Naya, however, alongside her fans, championed for this budding relationship to be taken seriously and treated with the respect it deserved. She told E! News in 2011: "It’s up to writers, but I would love to represent [the LGBTQ+ community] because we know that there are tons of people who experience something like that and it’s not comical for them in their lives. So I hope that maybe we can shed some light on that."

Glee ended in 2015, but Rivera continued to champion LGBTQ+ rights. For Billboard’s 2017 Pride Month, Rivera composed a "Love Letter to the LGBTQ Community", writing: "I have been so incredibly fortunate to portray a character on television that has meant so much to so many within the LGBTQ community. Off screen, I am a woman who stands in support of equality, and equal rights for all."

She added: "It has been one of the great blessings in my life to receive such love and touching stories as a result of my portrayal of Santana Lopez on Glee. We are all put on this earth to be a service to others and I am grateful that for some, my Cheerios ponytail and sassy sashays may have given a little light to someone somewhere, who may have needed it. To everyone whose heartfelt stories I have heard, or read I thank you for truly enriching my life."

I am by no means arguing that the Glee scriptwriters waved a wand and magically fixed all of pop culture’s queer diversity issues. There is still a dearth of young queer women in film and TV, particular queer women of colour. But Naya Rivera fought for this representation, and her contributions will never be forgotten.

I find some solace in knowing that someone gone so soon made such a tremendous impact on the world. It is heartening to know that Naya Rivera’s legacy will continue to live on, well beyond the closing credits of Glee. A whole generation of women who love women are forever indebted to this songbird.

Then, unrelated to sexual orientation, there was "damnation", where one would go for associating with certain anathema persons.