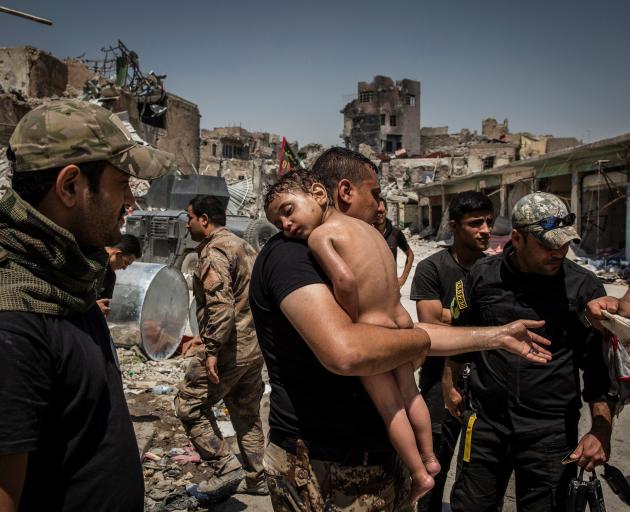 An unidentified young boy, who was carried out of the last IS-controlled area in the Old City of Mosul by a man suspected of being a militant, is cared for by Iraqi Special Forces soldiers last year. Photo: Reuters
Dunedin anaesthetist  Dr Mathew Zacharias is in Northern Iraq on an annual voluntary stint with a humanitarian organisation. He talks about the horrors of working in a conflict zone.

I am an ageing anaesthetist, ready to re-classify myself as an ageing humanitarian worker. At present I am having my yearly voluntary work with a humanitarian organisation in northern Iraq, doing the same kind of work I have undertaken many times over in the past years - anaesthetising in a conflict zone.

The country of Iraq interests me in many ways: apart from its rich cultural history, educational past and age-old traditions, it is full of very friendly people.

In spite of marching through the streets of Dunedin along with many others protesting against the unnecessary, and as yet fully unexplained, American adventurism into Iraq, a tragic war raged in that country.

This saw the replacement of Saddam Hussein and his Sunni-led administration by an equally cruel and intransigent Shia-dominated administration. The initial war was followed by a second war (still active in parts of this locked-down country), a war against mostly Sunni insurgency (IS) this time.

The ultimate result is that there are immeasurable numbers of deaths and near total destruction of a country, its infrastructure, its culture and total misery to its people. No amount of videos and photographs in the media can truly reflect how desperate and miserable the population actually are following this conflict.

The attention of the world has now shifted to Syria and Yemen and beyond. Rows and rows of camps for internally displaced people; with occasional unmarked torture camps for the detainees (at present housing the suspected members of IS) are all monuments to the futility of a war to democratise a progressive and functioning country, which had ample religious freedom.

I am saddened that New Zealand was conned into this never ending circle of violence by participating in the war in Iraq, probably influenced by its ongoing commercial interests rather than anything else; euphemisms such as tactical support and military training are just that, glorified names.

In my view, New Zealand had no moral right to get involved in a war no-one really wanted; more importantly, our Government has no moral authority to continue to be part of it, however small our part in it might be.

It is only a short walk from our residence to the hospital; the three-minute walk takes you past half a dozen destroyed houses. Our work mainly focuses on the internally displaced people from nearby refugee camps and some local residents; all the hospitals around have been destroyed, the nearest functioning one being 45 minutes away, with no guarantee of treatment access; there are a few private hospitals within a two-hour drive, but often too expensive for the poor.

Our work also includes looking after some enemy combatants. It took me a while to recognise that some of the combatants (prisoners of conflict) presented to us were really alive and not corpses.

One of them was so young he will struggle to meet the legal definition of an adult in New Zealand. In the history of humankind the victors always treated the defeated with contempt, disdain and scant respect, with liberal amounts of torture, starvation and possibly agonising deaths.

One can make up international rules by various international bodies, but the victors and their supporters very often ignore these inconvenient rules; the international media and most other countries unfortunately often show a wilful ignorance to such issues.

The nature of our work consists of dealing with illnesses and injuries, domestic or conflict related, of all ages and sexes. We admit them, fix them to the best of our ability using the meagre resources we have and send them back to where they came from, most often with disabilities such as a lost limb or two. But they thank Allah the Merciful for whatever is given to them.

I have spent a lot of my summer holidays working in similar places.

I find the gratitude and happiness on the faces of these people rewarding enough to ignore exotic holidays I might have had somewhere.

We get a lot of sick children, some in really bad shape, our hospital being the only working one capable of looking after sick kids in the area.

It was great to see teams of local doctors and nurses doing everything possible to save the lives of the little ones.

At the same time, it was heart-breaking to see that their heroic efforts to save some children were not always successful. I have vivid memories of a young mother waiting anxiously in the corner of the emergency room, watching desperate attempts by the doctors and nurses to save her 1-year-old daughter, quietly weeping and praying to Allah.

The child died after half an hour of desperate attempts to save her. No-one was successful in consoling her mother.

Everyone around had a tear or two in their eyes.

The modern trend around the world in a war against supposed terrorists almost always includes eliminating the suspected or real enemies and totally destroying their houses and property. Some of them might run away before getting eliminated; however, their pet animals have very little chance of escape.

This includes dogs and cats. One notices hungry and pathetic looking and almost always injured dogs and cats, hobbling around the destroyed houses, expecting their masters to turn up any day. They could be strays or pets: but it is always easy to make out which one is a pet and which one a stray. The pets often lie or wait outside the totally destroyed houses, with a very friendly look and patience about them. The animals still wait in and around those houses: in the cold nights of the winter (and hot days of summer I am sure): sheltering at nights among the rubble of destruction, until another day appears with fresh hope and further disappointment.

Luckily, people of Iraq are generally not cruel to animals. The animals are not booted out from footpaths and might even get some scraps of food thrown in their direction. The people are compassionate and probably know the impact of the separation, loneliness and poverty, since they have also undergone all these themselves.

Arguably, when it is really difficult to look after the human casualties of war and give them a respectable life, no-one has the time or money or enthusiasm to look after the lost or abandoned animals. But animals are also simple and innocent creatures, once loved by someone, now abandoned and helpless.

Would I ever support another war somewhere, however great the justification for it might be? I will not. War takes a great toll on humans and animals alike. War never solves a problem, but often creates a bigger and more complex one. The only people who benefit from a war are those dogs of war, who make and sell the weapons and profit from it, and religious or racist fanatics who survive on hatred.