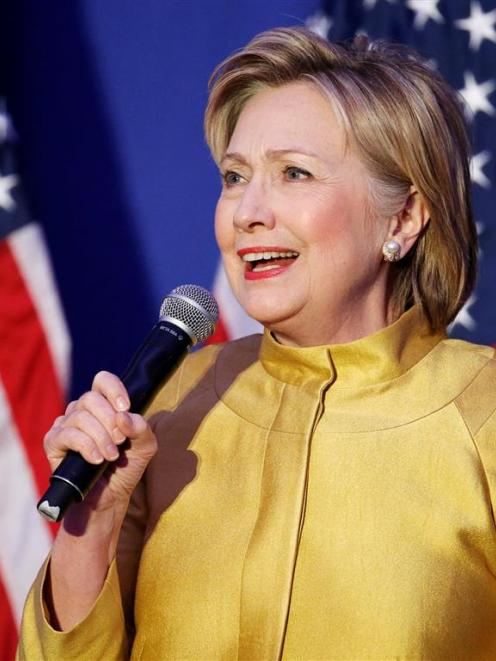 Hillary Clinton as president "will not rock the boat", Gwynne Dyer writes. Photo by Reuters.
Shortly before John Kasich dropped out of the race for the Republican presidential nomination, leaving Donald Trump as the only candidate, the Ohio governor put up a spoof video on the internet.

Modelled on the old-fashioned intro that scrolls up the screen at the start of each Star Wars movie, it envisioned a future in which Trump won the candidacy, lost the presidential election and left Hillary Clinton triumphant.

Titled "Our Only Hope'', Kasich's video began: "Upon defeating Donald Trump in the largest landslide since Reagan in 1984, President Hillary Clinton is preparing to name her newest Supreme Court justice, Elizabeth Warren. [House] Speaker Nancy Pelosi is planning new tax hikes, hoping that Senate President Chuck Schumer and his new Democratic majority can swiftly get it to the President's desk for her signature.''

"New executive orders restricting the Second Amendment are being drafted while increased federal spending on Obamacare is readied. Meanwhile, our allies across the world are swiftly losing faith in America's role as a global leader, empowering our enemies and leaving America in a more dangerous position. But we have hope it can be different ...''

It was a roll call of all the nightmarish things that Republicans fear a Clinton presidency would do: create a "liberal'' majority on the Supreme Court, raise taxes, bring in gun control and spend more money on healthcare for poor Americans.

Mr Kasich, of course, was the "Only Hope'' to prevent this disaster. (It was his video, after all.)

If Mr Kasich didn't get the Republican nomination, according to the video, then Mr Trump would win it, but then lose the national election and put Mrs Clinton into the presidency.

That would be followed shortly by dragons, plagues and strange portents in the sky, leading to the full-on End Times during her second year in office.

Well, Mr Kasich is out of the race, Mr Trump will get the Republican nomination and Mrs Clinton will win the presidency by a landslide, just like the video says.

Not only that, but the Democrats really may win control of both houses of Congress.

Mrs Clinton will probably create a liberal majority on the Supreme Court, tax the rich a bit more and expand the Affordable Care Act (what Republicans call "Obamacare'').

She probably will tackle gun control, too, although you should not hold your breath while awaiting a positive result.

She will certainly push on with Mr Obama's initiatives on climate change and add to them.

(She talks about wanting "half a billion more solar panels deployed in the first four years''.)

But will she do anything genuinely surprising?

It would be astounding if she did.

Mrs Clinton is "a safe pair of hands'', not a radical.

On foreign policy, she belongs to the "Washington consensus'', so she is suspicious of Russia and Iran, reflexively pro-Israel, and uncertain what to do about China.

She resents the fact that people still bring up her vote in support of George W.

Bush's invasion of Iraq in 2003, but it does highlight her inability to think outside the box that the rest of the consensus is trapped in at the time.

She takes the standard liberal positions on practically every domestic issue from gay marriage and abortion (cautiously pro) to immigration (no mass deportation of illegals).

She has talked about the need to reform the rules on political campaign finances, but would have trouble in getting that through even a Democratic-controlled Congress ("the best Congress that money can buy''), and might just decide not to waste her political capital that way.

If all this makes Mrs Clinton sound like a profoundly unexciting president, that would not bother her a bit.

Nearly three decades of experience with the political game at the highest level has reinforced her natural tendency to think only in terms of incremental change, and her whole approach to politics is managerial, not transformational.

She will not rock the boat.

This is perhaps not such a bad thing in a peacetime national leader - and the United States really is at peace, despite the small overseas military commitments that entail an occasional military casualty.

When you are setting a new precedent for who can hold the office, steady competence is a better advertisement for the new rules than high excitement.

It's also the best way to assure a second term in office - which could also be within Mrs Clinton's grasp if the Republican Party splits either before or after the electoral debacle that, with Mr Trump as its candidate, now seems almost certain.

However, that would make her 77 at the end of her second term.