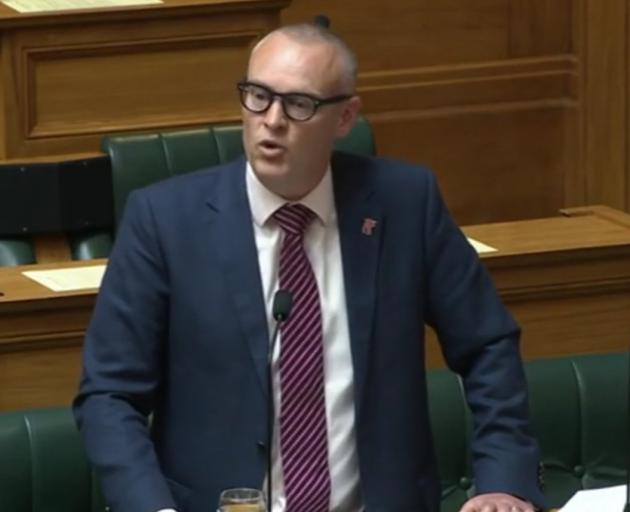 Dunedin Labour MP Dr David Clark defends his performance as a minister. PHOTO: PARLIAMENT TV
As has been mentioned a few times before in Southern Say, it can sometimes take the Government a wee while to getting around to doing things.

The most egregious example on the parliamentary order paper right now is the Kermadec Ocean Sanctuary Bill, which has sat languishing since 2016 going nowhere fast and looks like staying there, despite Leader of the House Chris Hipkins’ assertion last week that it would be debated "in the fullness of time, at the appropriate moment".

However, the Retail Payment System Bill, in the name of Dunedin Labour MP Dr David Clark — which also began its long and winding road towards becoming law in 2016 — was back in the House on Tuesday for its second reading.

Six years ago, the Ministry of Business, Innovation and Employment was asked by the then National-led government to examine whether New Zealand’s retail payments systems were producing good economic outcomes.

An issues paper was published that October but then it was tumbleweeds until late 2020 when the freshly re-elected Labour government announced plans to examine allegedly high service fees.

Technically, what is being considered is the "interchange fee" — the price the provider of credit charges a financial institution, but that then gets passed on to the retailer, who then adds on the transaction fee you and I are asked to fork over for the privilege of buying something with our credit or debit cards, as opposed to handing over notes or coins.

As anyone who has ever taken the trouble to look at the fine print on their bank statement can tell you, these various small charges add up to real money — and that has been especially so since the advent of Covid-19 lockdowns boosted the use of online shopping.

That is not all the Bill considers though. Also in the spotlight are credit card payment loyalty schemes which offer reward points for purchases.

The argument against such schemes runs that while they are great for banks as they generate business, and great for those who are in the scheme and buying the items with their credit cards, the less well-off who might only buy, say, an airline flight once in a while end up effectively subsidising the rewards more frequent flyers are earning, because they will never spend enough to get rewarded as well.

The Government also wants to make it easier for potential competitors to the established payment service companies to set up: nifty and convenient things such as paywave are not available everywhere, mainly because smaller retailers question the ratio between their cost and the revenue they might generate.

The first reading debate late last year was overseen by Waitaki National MP Jacqui Dean, who during her brief stint as commerce minister had fleeting responsibility for this work, and it proved to be a surprisingly feisty affair.

The second reading had its moments too, such as when Dr Clark introduced the House to the "waterbed effect" — where lowering one cost to consumers results in another one rising.

National has supported this Bill so far and continues to do so, but has been more than a little grudging about it, contending that while it is a small boost for retailers and consumers it comes in the context of other costs increasing.

Labour, however, claims $74million worth of annual savings and that the oversight role given to the Commerce Commission of the sector through the proposals could lead to even more.

As it turned out, Tuesday was a busy day for Dr Clark, who also had to front for his allotted time in the annual reviews debate ... and just how much time that was turned out to be was a point of dispute.

Every year, as part of the Budget process, the minister responsible for each subset of expenditure has to front up to the House to answer questions from any or all about how they spent the taxpayer’s money.

Dr Clark’s commerce, consumer affairs, and statistics debate followed finance and police, which could have given it something of an after the Lord Mayor’s show feel, but it turned out the Opposition had plenty they wanted to grill him on.

National’s commerce spokesman Andrew Bayly and his Act New Zealand counterpart Damien Smith were highly interested in the fuel market study, the supermarket market study and the sudden revision of the Credit Contracts and Consumer Finance Act, and each sounded somewhat dubious of Dr Clark’s claims the studies had had "a genuine impact" on prices, and that all was now smooth sailing for those seeking credit.

Although those issues were weak points for Dr Clark, arguably he is most vulnerable over just how prepared Stats NZ is for the coming census, which might explain why his Labour colleague Jamie Strange was teed up to give the minister a few minutes to say how well things were going.

However, National Party statistics spokesman and Dunedin list MP Michael Woodhouse very much doubts things are tracking towards a successful 2023 census, but battled to get that point across.

Assistant Speaker Jenny Salesa, who believed Dr Clark began speaking at 4.20pm, called time on him and called for the minister of education to step up, but according to Mr Woodhouse’s watch Dr Clark had actually started at 4.27pm.

"I’m more than happy to take a question from the member," Dr Clark helpfully pitched in.

"Obviously, it cuts into the next member’s period but that’s a decision for the Opposition to make and I’m happy to stay a little longer to answer his question."

Which, eventually, was: will the census be delayed?

Dr Clark’s response that he expected there would be a contingency if it had to be delayed, but he did not think that would be needed, left that issue dangling as a statistical cliffhanger for the next exciting instalment.