Macron struggles but hope not lost 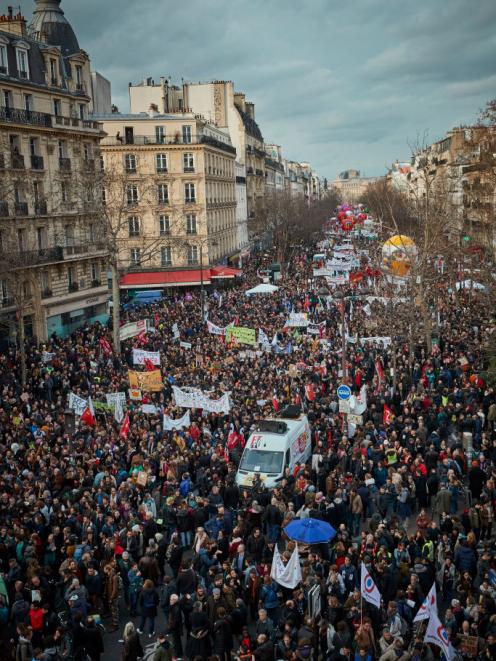 Thousands take to the streets of Paris in December to support the National strike over pension reforms. Photo: Getty Images
President Macron pledged that the 2020s would be a decade led by ‘‘France and Europe’’. He managed to make even that sound dull. Johnson spoke in the giddy aftermath of a great election victory. Macron spoke during the longest rail and metro strike in recent French history.

It will soon be three years since Macron was hailed as the world’s centrist saviour, the hero of middle-of-the-roaders everywhere. He was then — perhaps even more so outside France — seen as the anti-Trump, the antidote to Brexit, the providential pro-European who would halt the slide to anti-Europeanism and anti-globalism.

Now, halfway though his term, Macron is facing his second domestic revolt in 12 months. He has quarrelled with Donald Trump. He has annoyed other European leaders by blocking EU enlargement and declared Nato to be ‘‘brain-dead’’.

He faces municipal elections in March, in which his LREM party (just 3 years old) will risk mayoral candidates in only two cities, Lyon and Paris.

What has gone wrong? Arguably, not much. In two and a-half years, his government has pushed through deeper economic reforms than any president in the past four decades. His changes to the French labour market, the state-owned railways, welfare and tax-collection systems have been well considered and long overdue.

France has suffered for decades from jobless growth. In the past two years, it has shifted, partly thanks to reforms started by Francois Hollande under Macron’s influence. More than 260,000 new job opportunities were created last year, mostly in the private sector. More than 700,000 new businesses were launched, a new high that broke the record set in 2018.

The two ‘‘popular revolts’’ against Macron should also be placed in context. The gilets jaunes rebellion continues but has mutated from something powerful, atypical and anti-political into a more traditional and marginal movement of the hard Left. The transport strikes against pension reform currently involve about 0.1% of the French workforce.

Under 7% of railway workers are on strike, compared with 30% in early December.

Macron’s real failures have been less tangible. He came from nowhere, partly through outrageous fortune, to become president at the age of 39 in a country that had grown used to gerontocracy. He has since failed to build a solid electoral base or a flourishing grassroots movement. He has failed to convince more than a narrow sliver of the electorate that there is a coherent philosophy to ‘‘Macronism’’. He regards his economic and social reforms — and his plans for strengthening the EU — as necessary to protect French, and European, prosperity, culture and sovereignty.

A great many French people, especially on the left and far right, believe that he is somehow un-French: a man influenced by alien and outdated, ultra-liberal, Anglo-Saxon attitudes.

In his first months, he made clumsy attempts to rekindle the almost mystic relationship with the French people that Charles de Gaulle and Francois Mitterrand enjoyed. He tried to be what one French commentator called a ‘‘liberal strongman’’.

Macron is a revolutionary in a suit, not a politician. He is a convinced democrat who grows easily impatient with democracy. He has a lucid vision of where he thinks France and Europe should go next (a mixture of freer markets internally and hi-tech protectionism to prevent Chinese or US domination). He is impatient with the messy democratic processes, in France, Brussels and Berlin, needed to achieve his goals.

As a result, Macron, the anti-populist intellectual, has a fascination with populists, cultivating bromances with Trump (failed), Vladimir Putin (on-off) and Johnson (watch this space). Unsurprisingly, the ‘‘liberal strongman’’ approach failed. Populist leaders cultivate enemies and make visceral appeals unconstrained by the truth. Macron is not above the occasional mistruth or exaggeration but, unlike the trio listed above, he does not lie shamelessly. Instead, he Macronsplains.

Put him before 100 people in a village hall and he will speak impressively on everything from class sizes to rural railways. Put him before two foreign journalists (like his tour de force interview with The Economist in November) and he will present a brilliantly joined-up view of his policies on Brexit, EU reform, hi-tech protectionism, Russian and European defence. What he cannot do is find the emotive language to enlist a majority of French people in a crusade for ‘‘reform of the euro zone’’ or ‘‘Scandinavian-style flexi-security’’. Quite possibly, such language does not exist.

He has therefore zig-zagged through. He has sometimes been ‘‘Jupiter’’ (his own word), allowing the Prime Minister, Edouard Philippe, to deal with the mortals. He has sometimes been a brilliant young man visiting the mortals in shirt sleeves. After the gilets jaunes revolted, Macron embarked on a national tour of village halls to listen to complaints and offer solutions. His Great Debate, mocked at first, was a huge success and helped deflate the yellow vests.

The row over pension reform is a microcosm of the visionary but politically impractical side of Macronism. There was no pressing financial need to shore up a chaotic system of 42 state pension schemes that has already been tinkered with five times since 2003. Pensions are the third rail of French politics. You touch them at your peril. The almost complete absence of private pensions in France means that any state pension reform worries the whole electorate.

A prudent politician, after the gilets jaunes revolt, might have delayed the reform until after the 2022 elections. There can be no immediate economic or electoral bonus from a reform that will not take place fully until 2037. But Macron saw pension reform as central to his drive to alter the way France thinks — to prepare the French for a world in which people change careers and work longer. As things stand, the French work productively but put in fewer hours, on average, than any other western democracy. Early retirement is not the sole explanation but one of the principal ones.

Something strange has happened in recent months, however. Macron has gone off the radar on pension reform. No Macronsplaining; no second tour of stand-up gigs in town halls; no set-piece speech or ‘‘letter to the French’’. All were mooted and dropped. On New Year’s Eve, he was expected to come down from Olympus and make peace offerings. He offered nothing. He called for a ‘‘rapid compromise’’ but left it to Philippe to do the heavy lifting. He was neither Jupiter nor the brilliant young man in shirt sleeves. He was simply limp.

Others complain that he has taken his eye off domestic policy since the European elections last spring.

He has diverted his mental energy to European and international affairs, ranging from European defence to Iran to the jihadist threat in the Sahel. One senior source said: ‘‘He didn’t want to be in the front-line trenches again on pensions. He thinks he can make more of a difference in Europe.’’

If the pensions reform goes through, as it probably will, Macron’s domestic manifesto will have almost been delivered.

He can hope to regain some popularity from the rising tide of jobs and from tax cuts that will take effect from this month. His current opinion poll ratings, in the low to mid-30s, are not disastrous for midterm and no serious rivals have emerged.

He only needs to score in the high 20s in the presidential election first round in 2022 to reach a second round run-off, almost certainly a rematch of his 2017 showdown with Marine Le Pen. The far-right leader has also been quiet recently.

She hopes for good results in the council elections in March. All opinion polls and precedents suggest that even a wounded and unpopular Macron would beat her in 2022 (though by less than the 66-34 drubbing of 2017).

A large question remains. Which Macron will France, Europe and post-Brexit Britain see in the next two years? The cocksure Macron of 2017-18, the chastened, shirt-sleeved Macron of 2019 or the downbeat Macron of December 31, the ‘‘liberal strongman’’ wearied by democracy?

It is going to be a dangerous year. For all his faults, the world will be the better for a confident, dynamic Macron.

■ John Lichfield is a journalist based in France since 1997.