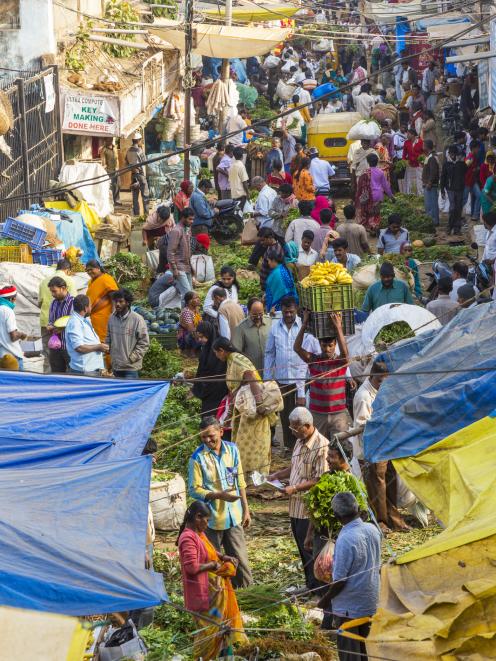 The dynamism, the energy, in India is there for all to see. Photo: Getty Images
I am sitting in Mumbai airport reflecting on what I have learned as part of a New Zealand trade delegation to India.

How about this: the average age of an Indian living in India is 29 and that average won’t increase until 2042. India’s population grows in size by New Zealand’s population every year.

In a country of 1.3billion people, the Government has in the past few years rolled out the biggest biometric ID system in the world. Prior to this, 40% of births went unregistered.

This complex, colourful, chaotic country averages annual GDP growth of 7.5% and is expected to grow from a market size of $US2.8trillion to $US18 trillion ($NZ4.5trillion to $NZ28.7trillion) during my lifetime. The timing of the trade delegation is almost uncanny as Covid-19 virus wreaks havoc in China and on the world’s trading economy.

As a country, we are overexposed to China, which we have known for some time, but it takes tremendous discipline and resources for businesses to diversify their markets in the face of China’s insatiability — until a crisis that is.

AbacusBio has been working in the Bihar region of India for a few years now, led by my colleague Peter Amer and in collaboration with Dr Chanda Nimbkar from the Nimbkar Agricultural Research Institute and with the Aga Khan Foundation.

The project is funded by the Bill and Melinda Gates Foundation and aims to empower rural women to improve the health, management and genetics of their goats. AbacusBio’s software product, Dtreo is being used for data capture and analytics.

The whole programme is starting to make a real impact in terms of nutritional and commercial returns for families. As I take in this country, I find myself constantly challenged thinking about how I fit what I have learned with what the opportunities for New Zealand might be and the opportunities for AbacusBio.

For many years, the New Zealand Government has strived to achieve a free trade agreement with India — the blockage to success being dairy. India is the largest producer and consumer of dairy products.

New Zealand produces a fraction of what India produces, yet New Zealand and Fonterra, are seen as dairy ‘‘giants’’ and because of that there is a belief that an FTA between our countries will mean that we will flood the Indian market with our milk products and Indian farmers will suffer.

Farmers in India generally don’t own land, they are the poorest of the poor working the land for a pittance, yet because of their numbers they hold tremendous voting power. Rural India makes up greater than 50% of India’s population and India is the world’s largest democracy — in a democracy every vote counts. On top of that, political changes which hurt rural India send migrants in droves to the cities, where they create more slums and headaches for the Government.

There are good news stories — New Zealand food companies paving the way in India include a young company, QualityNZ, distributing New Zealand lamb, seafood and other products in to 5-star hotels and into first-class airline cabins.

There are also New Zealand technology and service companies gliding under the tariff barriers, such as Valocity Global and ReDesign. Ultimately, technology, education and high-end food offer our best export path into this economy, especially in the short term.

I need another column to share more insights and even then, I will never do this country justice.

In the meantime, I fly to Colombo to investigate opportunities to collaborate scientifically and commercially with Ayurvedic plant medicine experts — never a dull moment.

As I sign off, I leave you with this from Jeff Bezoz, founder of Amazon: ‘‘I predict that the 21st century is going to be the Indian century. The dynamism, the energy, everywhere I go here is amazing.’’