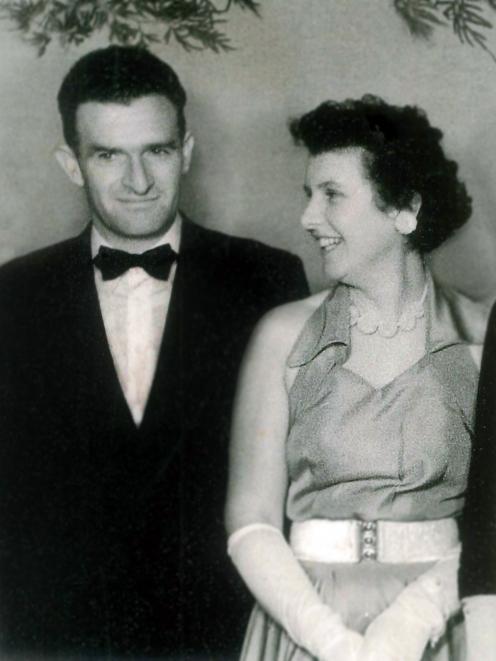 Elspeth Mclean’s parents John (Tud) Badcock and Marion Swafford. PHOTO: SUPPLIED
On the eve of our first Matariki holiday, I was making chicken soup for a recently bereaved family and thinking about the dead.

I often think about dead people.

Maybe that’s because death has been a part of my life since my mother died when I was 4.

In those times, more than 60 years ago, nobody wanted to talk about that young mother of three or her death from asthma, because it was too sad and raw, and as a child I soon learned not to ask.

My sister and I were thrilled by the discovery of a box of Mum’s old high heels out in the shed, but she does not recall the intrigue of the mauve halter-neck ball gown I found tucked away in a corner of the wardrobe in our bedroom. Somehow, these items had escaped the post-death possessions cull which would have been the norm.

I marvelled at the daintiness of Mum’s feet compared with mine and wondered when she had worn the gown. My recollection is Dad’s dancing was more shuffle (and not of the soft-shoe kind) than glide and it was hard to imagine a whirl around the dance floor with him would have held much romance.

All these years later, I like to think many of us have become more at ease with talking about the dead, honouring them and the impact they have made on us whether they be, as Elizabeth Yates would say, family- close or friendship- wide.

I would be horrified if any of my offspring were too scared to talk about their late father or ask questions about him for fear it might upset me. To me, it is only through such talking and reminiscing that someone can live on in our hearts and minds.

And for those who are not quite there yet, comfort-wise, the Matariki celebration is a gift, with part of its tradition looking back at those who have died in the past year. Having a special time for such reflection in the slowness of winter seems so apt, rather than trying to fit it in on December 31 when we are reeling from the frantic build-up to Christmas and the summer holiday shut-down.

I spent some time that evening remembering the people I had known who had died over the year or were loved by people I know and love. The total was 15, which may be a reflection of my age. Among them were two people who had taken their own lives, some who fell far short of their three score years and 10, those who had wasted away with illness and others who will be forever remembered for their ready laughter and zest for life. One of them was a townie cousin on my paternal side. He was part of a group of cousins who were much older than me. That age difference, and the fact we rarely saw some of them, added to their mystique and glamour and it was hard for me to shake being awestruck long after I had grown up myself.

There may not have been any finesse to my remembrance, in my small kitchen with its rising number of dirty dishes as the soup production progressed, but there was something about doing that while making comfort kai with love which seemed right and grounding.

Forearm-deep in the dish-washing water, I thought about the year to come and the trip my youngest grandchild is about to make to meet her other grandmother, half a world away. I pictured the excitement of that babicka holding her only grandchild for the first time. It is hard not to feel unsettled about the little family heading for central Europe while the war in the Ukraine rages on, but that cannot be allowed to override the joy.

On Friday I admired the sunrise and sunset, although it was a step too far to expect me to find the Matariki constellation. The only thing I can ever confidently identify in the night sky is the moon.

I am surprised at the pride I feel in this national holiday. At this point it is still without the commercial baggage of Christmas and Easter and escapes the politics of Waitangi Day. I have always struggled with Anzac Day, born as it was from a senseless war we should never have become involved in. I look forward to Matariki developing into a memorable event in my whanau’s calendar in future.

P.S. A few weeks before Matariki, I received a treasure from Mum’s sister — a photo of Mum and Dad at a ball in their courting days. Like me, Mum wasn’t good at paying attention to the photographer. There is a halter-neck gown. I like to think it is mauve.