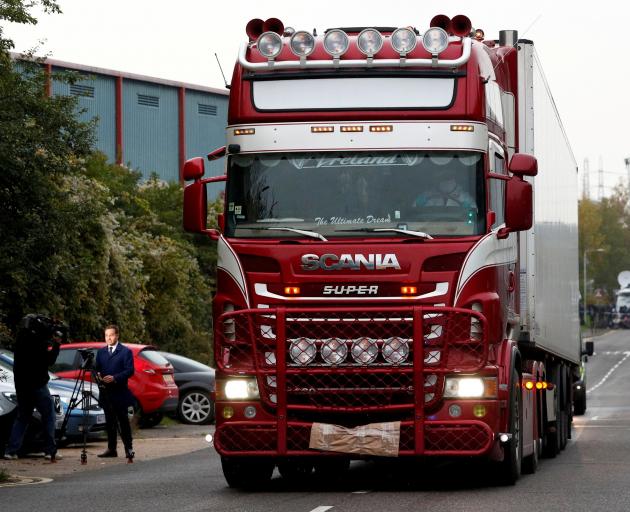 Police move the truck container in which the bodies of 39 Vietnamese people were discovered, in Essex, earlier this year. PHOTO: REUTERS
Human trafficking is not just confined to foreign countries, writes Elizabeth Mackie.

In October, 39 Vietnamese people were suffocated in a refrigerated truck and abandoned on an English roadside.

These victims had paid agents who promised them a future and work in another country. They had scraped the money together from their poor families and friends, who expected that they would send money back once they were settled. Ten of the dead were teenagers. The callousness of the agents who delivered the dead bodies into Britain staggered the media and the world.

This is an example of trafficking in human beings for profit. Agents such as these are engaging in the third most lucrative trade in the world, after that in oil and armaments. The United Nations’ International Labour Organisation estimates that trade in human persons amounts to $US150billion ($NZ233.5billion) of the total world trade annually. It is very big business.

This business may seem remote from Aotearoa New Zealand. We can ignore it as something that is confined to television screens and news reports from the Mediterranean or the Indian Ocean. But it is happening here, although in less spectacular ways. And it is not something new.

A catalogue arrived in the mail of young women, each with her photograph and a short biography. They all seemed to have a tertiary qualification, they were young and fluent in English. I was invited to pay the local agent to book my travel to the Philippines, arrange hotel accommodation and a meeting with the women of my choice from the catalogue.

The address of the ‘‘seller’’ was here in Dunedin.

Needless to say, I was not in the market as a buyer. Some months later, I met a young Filipino woman who had escaped from such an arrangement when she discovered on her arrival in this country that she was expected to be the ‘‘wife’’ of two men — the one who had bought her and his brother.

Her life in a remote rural location quickly became unbearable and when I met her she was living alone in a city, trying to achieve what she had come for — the sort of income which would enable her to support her family back in the Philippines.

The countries of origin have increased since then as have the workplaces for trafficked men and women. This modern day slavery continues and New Zealand participates in the global trade in human beings. We have people trafficked here for industries such as hospitality, sex work, construction, fishing, horticulture and agriculture.

People in countries where poverty is rife frequently borrow money to pay an agency or business to arrange their travel and secure them employment in New Zealand.

Once they arrive they discover that the promises are fraudulent. Their passports are confiscated by their employers and they are expected to work for wages well beneath the minimum legal wage.

In cases that have come before the courts or authorities it has been found that accommodation was provided by the employer in lieu of wages and the trafficked person ended up more deeply in debt.

The workers are afraid to speak out in case they are deported and have to face unpayable debts in their own country.

The Government is aware of these practices and is on the alert for trafficking and unjust employment conditions of migrants.

The first conviction for trafficking was in 2016, when a Fijian resident was sentenced in the High Court at Auckland to nine years and six months’ imprisonment after being found guilty of 15 human trafficking offences.

The 15 Fijian workers had been sold a dream — to work in New Zealand and earn almost seven times their weekly wage in Fiji. They sold their family possessions and borrowed thousands of dollars from their villages for the chance to work in the high-paying jobs which would give their families a better life. But in New Zealand they were forced to work for long hours, sleep on the floor of overcrowded basements and were paid little, if anything.

In this country we also benefit from modern slavery in other ways. Imported goods can be produced by slave labour, including the illegal labour of children.

It is difficult to ascertain details of the production methods used in various industries which export to New Zealand. The companies profiting from imported goods are reluctant to examine the supply chains and production processes too closely.

So what can New Zealand do? We can become better informed about the global trade in human persons and the use of slave labour in the production of goods.

We can ask the uncomfortable questions which let our importers know that their customers are concerned and want answers.

We can lobby for specific anti-slavery legislation here such as that being planned in New South Wales. (Already our Crimes Act of 1961 was amended in 2002 to include the offence of human trafficking.)

We can be alert for migrants to this country who seem unduly stressed or anxious.

A little kindness may invite their trust and enable us to assist them if they are suffering from injustice and exploitation.

- Elizabeth Mackie is a Dunedin member of the Anti Trafficking Group.