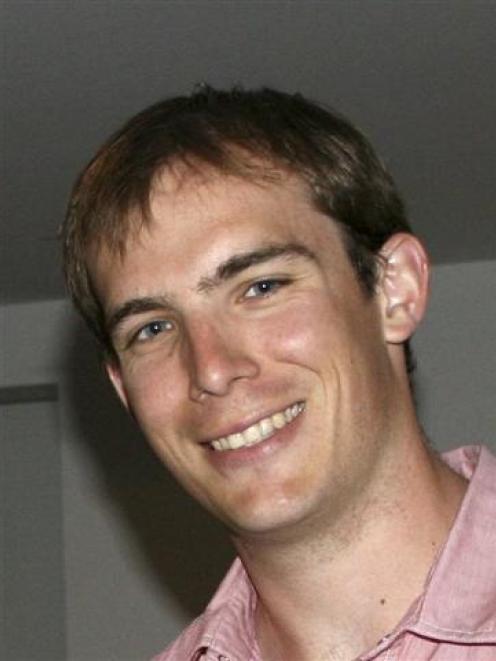 Rhys Brookbanks: "Focus, enthusiasm, and appetite for reading". Photo by Megan Hitchcock.
This week we take the rare step of republishing a poem that has already appeared in the Monday's Poem column. It is by Rhys Brookbanks, a University of Otago English and History graduate, a former Otago Daily Times poetry contributor, and a newly qualified journalist.

Aged 25, Mr Brookbanks died in the CTV building in Christchurch's February earthquake. An unspeakable tragedy for his family - Alan, Fran, and Donna Brookbanks, and his fiancee Esther - and friends, it is also a loss to journalism, for although he was too early in his career to have made a significant mark, he self-evidently had a rare facility with language.

In an age of text messages, email and social media, in which many have dispensed with the subtleties and power of more formal expression - arguably to the detriment of clear and concise communication - this young man already stood out.

Rhys Brookbanks studied at the University of Otago from 2005 to 2008, graduating with a BA (hons) degree in English and history.

"In 2007 and 2008," writes Dr Jacob Edmond, senior lecturer in English at the University of Otago, "Rhys worked tirelessly for the Association of English Majors, which under his leadership was renamed LitSoc.

As president in 2008, "he organised many social events and readings for students. In 2007, he edited volume 11 of Deep South, the English Department's long-running and highly regarded student-led literary magazine".

"We in the English Department owe a great debt to him for all the time and energy he put into the department," Dr Edmond said.

Dunedin poet, novelist and editor Emma Neale, who tutored Mr Brookbanks on a creative writing paper offered at the University of Otago, and selected his work for the Monday's Poem column, recalls "a quiet yet noticeably dedicated student, whose gently-framed yet perceptive feedback helped other students considerably.

"As a rookie journalist," she wrote in an appreciation for online academic journal Ka Mate Ka Ora, "he had already begun to publish articles and reviews on a wide number of topics - from book clubs to whale watching; from historical fiction to contemporary theatre.

He had in fact published only a handful of poems: but he already had the focus, enthusiasm, and appetite for reading widely that suggested the vital role poetry would have had in his future.

"In an unpublished poem, The Space Between, which he asked me to critique in November 2009," continues Dr Neale, "Rhys quotes Rainer Maria Rilke: `But granted the consciousness that even between the closest people there persist infinite distances, a wonderful living side by side can arise for them, if they succeed in loving the expanse between them, which gives them the possibility of seeing one another in whole shape and before a great sky!'

"The intimate love lyric that grows from that quotation reveals a thoughtfulness, openness and tenderness that seem to be the fingerprint of his personality, as well as much of his writing. Rhys leaves all of us who knew him feeling the ache of that infinite distance."

Of today's poem, the family informs us that Absconder was the name of Mr Brookbanks' grandfather's yacht - on which he often sailed. Writes his mother, Fran: "In 2010, Rhys wrote a short story also titled Absconder that went into more detail of sailing and the trips on the [Hauraki] Gulf that Rhys made with his pop."

For the rest of it, Absconder speaks eloquently, memorably, for itself.

• A memorial reading for Rhys Brookbanks will be held at Circadian Rhythm Cafe at 8pm on Thursday.

I see your hands stretching out
tarnished by time and the pull of too many ropes,
now consigned to the empty role
of saving your thin cardigan from slipping down your chest.

To think of the sights those hands have shaded from your eyes!
Where would you go now, Pop?
If you could sail your wheel-chair out that door?

You flick a look of recognition
before the horizon catches your eye,
and you sail off, face into the wind,
hands working the tiller,
muttering something about
lunch out the back of Rangitoto.

And as the moment fades away,
leaving you washed up on the shore
of this, your ten-foot kingdom,

I sit and wait for something,
to let me know that you're back with me,
something other than the mumbled, second welcome

that brings me back to earth.

But despite the pain of another non-conversation,

to see you pull the sail around
this box of panels and glass,
is a sign to this heart
that all's not lost,

and I'll gladly jump on board
for another sail, Pop.

You just tell me where we're going.