One nation's issue affects us all 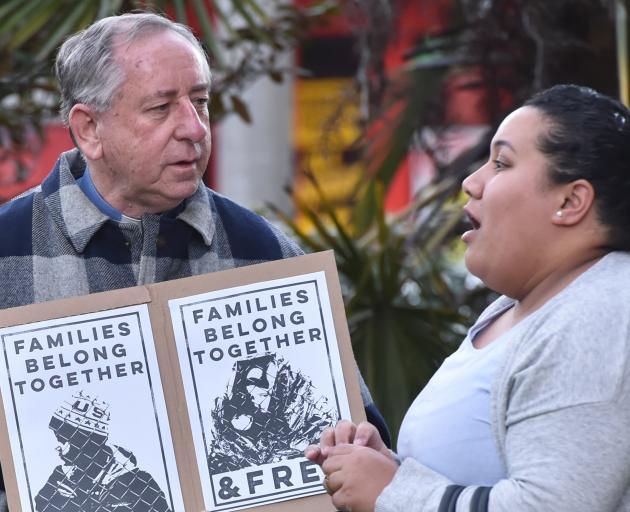 The Rev Kerry Enright (left) and Melissa Lama attend a vigil at Knox Church earlier this month to protest about US immigration policies. PHOTO: GREGOR RICHARDSON
On Saturday, July 7, people gathered in the Knox Church park. They were protesting the separation of children from their families at the US border.

The ODT reported that the gathering was small but vocal, counting among its ranks Dunedin South MP Clare Curran and Prof Kevin Clements, founding director of the National Centre for Peace and Conflict Studies at the University of Otago.

Yet, thousands of miles away from the events themselves, what were these demonstrators hoping to achieve? What's at stake here for Kiwis? The answer, in short, is quite a lot: nothing less than what it means to be human.

For the Rev Esther Clarke-Prebble, the priest at St Martha's Anglican Church, the event was about standing in solidarity with grass-roots activists working to bring relief to the refugees.

"We have to notice these moments when human rights are being eroded," she said.

"We don't want this to be normalised."

Clarke-Prebble likened the situation to a frog in a pot of water. It doesn't recognise the gradual increase in temperature as the water begins to simmer and slowly boil. The protest was about refusing to let these ominous events go unchallenged.

It's easy to claim the moral high ground, but Melissa Lama, one of the speakers at the event, directed attention back home to Aotearoa New Zealand. She likened the American policy to the Dawn Raids in the 1970s, which are still painful, living memories for many people. Refusing to tolerate injustice today means acknowledging injustice wherever it occurs, including in our own pasts, and our own complicity in the systems that produce it.

What role has faith to play in all this? Again, I think quite a lot. The Rev Dr Kerry Enright, minister of Knox Church, also participated in the event. He said, "The church is a global community." Christians around the world are united in the family of God. Those migrants, many of whom are Catholic, are my brothers and sisters in Christ. But we are also united by our common humanity since we all are created in the image of God (Gen. 1:26-27). This bestows dignity and worth on every person, including children, including migrants. Period.

Jesus taught his followers to love the people society rejected: the destitute, the sick, and the socially marginalised. He said. "Whatever you do for the least of these my brothers, you did it to me." (Matt. 25:40). This is a call to action, a call to follow the example of Christ by speaking up for those who have no voice and interceding for those who have no human advocate. Returning children to their parents shouldn't be a hard sell.

- Katie Marcar is a teaching fellow in biblical languages in the department of theology and religion at the University of Otago.

I don't agree with the policy on those children but easy for NZ to stand in judgement when we don't have the problem of a land border and thousands of people walking across it. The opposing extreme political viewpoint to Trump is open borders driven by a desire to destroy the nation state to promote one world governance but will actually lead to anarchy.