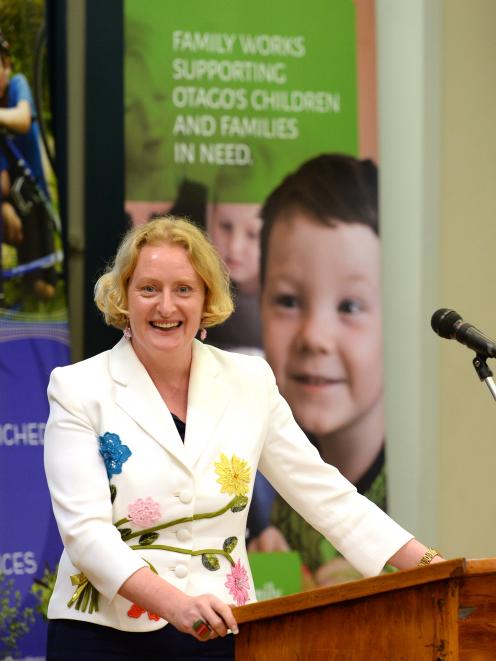 Oranga Tamariki chief executive Grainne Moss
I knew I was in deep denial when I started worrying about other people’s dusting.

After all, I am fond of urging others to follow Quentin Crisp’s advice that dust does not get worse after four years — ‘‘it’s just a matter of holding one’s nerve’’.

But there I was, in the movie theatre before the film began, getting in a quick few rows of knitting, and pondering how anybody could reach the high hanging light shades to dust them.

It did not look as if the light supports were extendable so the shades could be hooked and brought down for cleaning.

Would someone wielding a feather duster swing across the theatre, screaming with Tarzan-like triumph when they made connection?

Accommodating an interior scaffold seemed problematic. Maybe there was a way of dusting from the ceiling space.

Buoyed by the sugar rush from the chocolate-coated boysenberry ice-cream I had already scoffed, it could have been a time for quiet contemplation of more important things, such as the election.

But I find I just want the election to be over. I cannot find any enthusiasm for the hustings hustle.

And while the media is in campaign mode, some important stories do not get the emphasis they deserve.

Last week, chief ombudsman Peter Boshier delivered a scathing report after reviewing 74 Oranga Tamariki cases where newborn babies had been subjected to — without notice — interim custody court orders under section 78 of the Oranga Tamariki Act. He found the orders were used more by routine than exception, despite OT knowing for months in most cases about the pregnancy and having time to involve whanau in decision-making about what would be best.

The sloppiness around the processes was astounding. The ministry was unable to identify the exact number of newborns removed without the parents and whanau being notified of the interim custody plans.

OT chief executive Grainne Moss insists she has no plans to resign and wants to convince us the ministry is heading in the right direction.

What I cannot ignore is that if it were not for the media focus on this issue, particularly the harrowing Melanie Reid Newsroom documentary about the attempt to uplift a Maori baby in Hawke’s Bay, there would have been no examination of this woeful section 78 behaviour or impetus for change.

Also, at the time the Newsroom documentary was causing consternation, Mrs Moss attempted the cliched attack the messenger ploy, claiming the documentary misrepresented what took place. It didn’t.

Are we to believe that now multiple investigations into the uplift issues have reached damning conclusions, Mrs Moss, who was the head of the organisation covering the time of the cases scrutinised by Judge Boshier, has had an epiphany?

She says since November things in the troubled ministry have improved and will continue to do so, but Newsroom’s dogged pursuit of this story suggests otherwise. Its coverage paints a picture of a dysfunctional management structure where over-worked social workers struggle to operate in the best interests of children and whanau and where they feel frightened for their jobs if they speak out about legitimate concerns.

Mrs Moss must report back to the Ombudsman on progress on his 32 recommendations quarterly, but will that be enough?

Where is the comprehensive oversight of this ministry? Even the fact Mrs Moss has 10 deputy chief executives, only one of them a social worker, made me raise an eyebrow (and not in jest, Judith).

With an increasing emphasis on whole-of-government approaches to issues, who is shining a spotlight on the involvement of district health boards, the police and courts in this saga?

The normally sure-footed minister Tracey Martin seems blinkered, clutching at any crumbs of good news in the ministry’s work and interpreting ongoing Newsroom coverage as unfair treatment of Mrs Moss.

She appears to think because social workers are not emailing her and spilling their guts and only prepared to speak anonymously to Newsroom that there is no cause for concern. Maybe she needs to stand back a little, take a more dispassionate look, and do some background reading on workplace bullying.

I cannot find recent comment from the Prime Minister on all of this. Is it simply that nobody has asked her about it? Weren’t children’s issues supposed to be her raison d’etre?

When I searched for policy around this from the parties making up the existing Government, the only reference I found to it was from the Green Party.

It’s all so disheartening, I have scuttled back to the dusting conundrum. My friendly local barista (don’t ask why I told him, blame the coffee) reckoned theatre staff just wouldn’t bother. Out of sight, out of mind. That almost has an election campaign vibe, but it hasn’t helped me understand how they might change the light bulbs.

Elspeth McLean is a Dunedin writer.

Once were starry nights, at 2pm.
The Embassy, perhaps. None of that white light on the Moorish interiors. Great for 'El Cid', 1964.

Would be great if we didn't need Oranga Tamariki but sadly people keep damaging their kids. Moving them around the same damaging environment won't help so OT gets stuck in the middle.

Perhaps to gain a deeper understanding of this we should be asking why Oranga Tamariki decided to make those uplifts or were involved to begin with? What dire dysfunctional family environments necessitated those responses?
Oranga Tamariki state in their operational brief that: “We only consider seeking custody of a child in circumstances of serious harm and when no other option exists to keep the child safe.”
“If there are concerns for an unborn baby, we look to work with whānau before the baby is born. This means we can make an assessment, hold a family group conference and if necessary make an application to the Court for an order before the baby is born.”
“If after assessment we believe a child is being or is likely to be seriously harmed, we must refer the matter to a Care and Protection Coordinator. They can be from Oranga Tamariki or from iwi groups with skills in engaging with whānau, hapū and wider iwi. They will hold a family group conference as per section 18 of the Oranga Tamariki Act 1989.”
It would seem in some cases not enough consultation was engaged in. However, regardless of cultural issues, the safety of a child must surely come first.