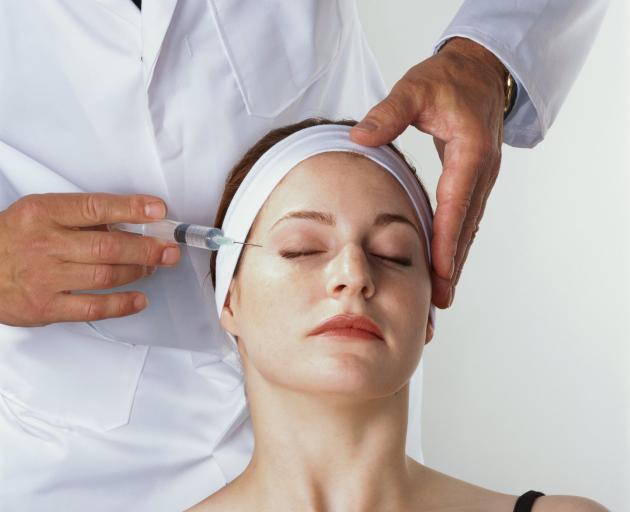 Botox may help you look younger, but your face could resemble a waxwork figure from Madame Tussauds. PHOTO: GETTY IMAGES
It wasn’t until I felt the sharp sting of lemon juice trickling down into my eye that I realised had made a terrible mistake.

Slumped over the bathroom sink, I squinted at the woebegone girl in the mirror and vowed never to bleach my freckles again. Although only 12 years old, I had joined the elusive quest for beauty — a desire that has plagued humanity for millennia, ever since the first caveperson spied their prickly visage in a calm pool.

From cramping corsets to the slitting and silicon-enhancing of breasts, there have been millions who would avert the inevitable threat of old age and physical deterioration — the "hideous winter", to quote Shakespeare.

Physical beauty is often equated with youth. It’s no wonder then that the search for a fountain of youth occurs frequently within a variety of cultural narratives. According to the Greek historian Herodotus, there existed a fountain in the land of the Macrobians which imparted super-human life-spans to those who drank from it. Alexander the Great was transfixed with the idea of a fountain of youth, travelling over a mythical land called the Land of Darkness to reach it.

As the fingers of European colonialism began to grasp the globe, the New World of the Americas was touted as the prime location for the fountain of eternal youth. It was the Spanish explorer Juan Ponce de Leon whose name became inextricably linked with the legend of this fountain. In 1513, Ponce de Leon led the first European expeditions into Florida, a land of many natural springs. Despite being there in an official capacity to find lost gold and claim land for Spain, Ponce de Leon often set off hunting for the fountain — he never succeeded in finding it.

Despite living in the Age of "Enlightenment", there was nothing Elizabethan aristocrats loved more than smearing a mixture of white lead, calcium carbonate and hydroxide all over their faces. White skin was favoured as it denoted wealth and power, as opposed to the tan acquired from hours of arduous labour in the sun. This powder was also handy in covering unsightly blemishes caused by syphilis, which ran rampant throughout the kingdom.

Although this powder helped men and women achieve the ghostly pallor of a week-old corpse, it also caused a number of awful, excruciating side effects, from skin inflammation to baldness. In addition to these toxic facemasks, a certain cadaverous hue could be acquired by controlled bleeding wherein one drained the ruddy glow of life from the body, drop by drop.

You thought lead powder was bad? Try eating rat poison. One outdated beauty practice was the ingestion of arsenic to "produce a blooming complexion, a brilliant eye and an appearance of embonpoint". This practice originated in southeast Austria, where during the 19th century, travellers and scientists reported the local consumption of "ratsbane" with their coffee.

Arsenic eating began with the consumption of a single grain at a time, until one built up a slight tolerance. Dependency soon followed, and the consequences of withdrawal included indigestion, anxiety, loss of appetite, spasmodic pain, vomiting and constipation. Arsenic also causes goitres (enlargement of the thyroid gland on the neck) — not exactly the blooming, brilliant swelling one might have hoped for.

Physicians and chemists soon caught whiff of this "beauty regime" and in 1901, the British Medical Journal claimed that: "It is a matter of common knowledge that arsenic and its salts exhibited for a time in small doses establish a tolerance, and the arsenic eaters of the Austrian Tyrol are classical proofs of the fact." These "scientific" claims lent validity to the use of arsenic in medicines and cosmetics.

The most popular of these compounds was Fowler’s solution, a preparation used since 1786 for its properties as a tonic and stimulant. With the publication of works such as The Chemistry of Common Life by James Johnson, romantic accounts of the beautifying effects of arsenic soon had women flocking in the thousands to chemists and department stores. Many new products flooded the market, from Dr Campbell’s Arsenic Complexion Wafers to Sulphide of Arsenicum ("the sure way to a better complexion"). External application of arsenic constricted capillaries in the face, enabling one to achieve the anaemic pallor so favoured by the Elizabethans. Arsenic eating continued into the 20th century, until investigators realised that it probably wasn’t the best idea. It’s all vitality and sparkles until someone’s throat swells up to bullfrog proportions.

From stem-cell research to bird-poop facials, anti-ageing is still an increasingly lucrative field of medicine. That’s not to mention the chemical peels that literally burn layers of skin off one’s face, inflatable butt implants or the appetite suppressants that cause heart attacks. At the risk of carping on, let me inform you of a certain pedicure technique where beauty seekers dunk their feet in a tub of voracious nibbling tiny fish. Sure, you might catch some disease from the person next to you, but at least you’ll have lovely soft feet!

Botox is a substance injected under the skin to smooth out wrinkles, while sometimes leaving the recipient incapable of registering emotion. You may look younger, but your face could resemble a waxwork figure from Madame Tussauds. This in itself is not necessarily a bad thing, but pumping oneself full of botulinum toxin can also cause nausea, respiratory infections, forehead and eyelid drooping, and flu-like symptoms.

Humanity has long been plagued by a desire to prolong life and youth — or at least, the appearance of it. Be it due to fear of death or the desire to look a certain way, this quest for eternal youth and beauty has frequently backfired over the ages. What will the future of beauty and anti-ageing look like? As loath as I am to admit it, I’ll likely be swept up by all the new fads and trends, just like my lead-applying, arsenic-eating predecessors.