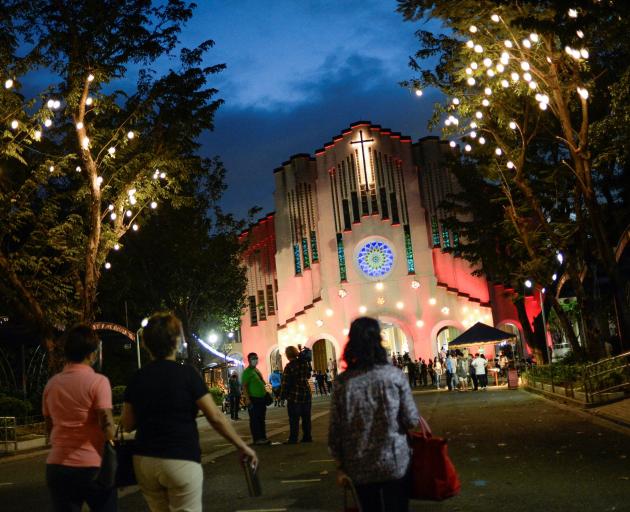 As the saying goes, Jesus is "the reason for the season". Photo: Reuters
As we approach Christmas, I think we’re all looking for a breather from the pressures of a challenging year and hoping for some sort of a break.

For Christians, we’re also looking forward to celebrating the birth of Jesus. As the saying goes, Jesus is "the reason for the season".

As John’s Gospel puts it, we’re celebrating that "the Word became flesh and lived among us" (John 1:14). This is central to Christian faith: that Jesus Christ is God the Son, "the Word of God", and that in Jesus, God has become a human being and has lived a human life among us.

At this time of the year, the Church looks forward to celebrating this with eager anticipation.

The Greeks spoke of "the Word", "the Logos".

For them this was something like a rational principle behind the universe, keeping it together. But they did not think that the Logos, the Word, would become a human being and be born as a baby. And if they ever had contemplated such an unthinkable thought as "the Word becoming flesh", it would be as the emperor, or as some highly important person.

They would never think that the Word would become flesh — a person — as a Jewish carpenter.

The Jews of Jesus’ time weren’t expecting "the Word" to become flesh either. Speaking of "the Word" evoked all sorts of ideas for Jewish people. It alluded to the creation story of Genesis 1, where God created by speaking. So "the Word" was seen as the creative agent of God. The Word of God also came to the prophets, inspiring them. And passages like Psalms 107:19-20 spoke of God healing and saving by his word.

But no Jews before the New Testament period were thinking that "the Word" would become flesh. Many Jews at the time of Jesus were hoping for a Messiah, a deliverer, a Son of David who would liberate the people from the Romans and re-establish the nation. But they weren’t thinking that the creative, prophetic and redeeming Word that God spoke would actually take on human form and live as one of us. This was an absolute and utter surprise!

Now, of course, the New Testament comes to affirm precisely this — that the Word has become flesh and that God assumed a human nature and became a human in the person of Jesus Christ. At the time it was totally unexpected.

But when we look back into the Old Testament, we see that the God of Israel is indeed the God of the unexpected, the God of surprises. God called Abraham and promised to bless the whole world through this one, totally insignificant, powerless pilgrim.

Or think of Joseph, the 11th of the 12 sons of Jacob. He was sold into slavery in Egypt by his brothers, yet it was this Joseph whom God used to rescue the whole family and keep all of Egypt alive during a seven-year famine.

Or think of the Exodus. Who would have expected the Creator of the Universe to deliver a small nation of slaves — and defeat the Pharaoh of Egypt, the most powerful ruler of the time — in the process?

Think of David — the youngest son of Jesse, the overlooked shepherd boy — whom God raised up to be the great King.

So God in the Old Testament is the God of surprises, the God who confounds expectations.

It’s very much in character then that God would do something so unexpected as coming himself — as a human being, a tiny baby. But the way that God actually surprises us in coming in person as Jesus — is totally surprising! Who would have thought it up!

In fact, God is so different from what we might have expected, that God needed to come in the person of Jesus to show us how different God is.

Otherwise, we’d never dream up many of the things that the Bible says about God — that God is not on the side of the rich and famous, but of the marginalised and oppressed.

That God is not on the side of might, but of the powerless and abandoned.

That God is a God of love, mercy and forgiveness, even to the extent of finding a way to bring us back to himself through the life, death and resurrection of Jesus.

The true wonder of Christmas is that we can know this utterly surprising, amazing God, for this God has come to live a human life among us. And that changes everything.

- Paul Trebilco is Professor of New Testament Studies in the Theology Programme at the University of Otago.