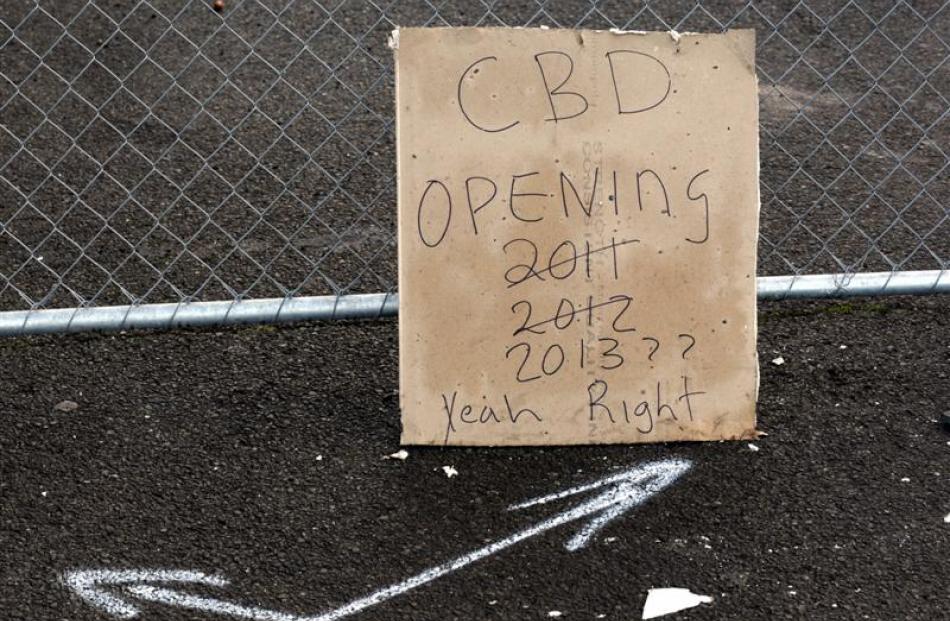 Doing battle daily with the fallout of the Canterbury earthquake earns admiration and respect, and even prompts a little humour. Photo by Peter McIntosh.

I shared a long ride with a Canterbury earthquake survivor at the weekend. It was an eye-opener.

This was an acquaintance from Christchurch days gone by, his son and my daughter in the same class at primary school, good mates. But for the intervention of mutual friends we had to an extent lost touch, and on this occasion driving south from the Nelson area, I was happy to have his companionship.

It always comes back to the quake, he told me. Every conversation, sooner or later, like a river finding its way to the sea, arrives back at the tremors and the aftershocks, both literal and metaphorical. And so, one way or another, although we both sought not to dwell on such matters - especially since the week of holiday he had just enjoyed was the first in a year when ever-present and intrusive seismic affairs had been left behind. The river eventually found the sea.

My friend is one of a very rare breed: a New Zealand garment manufacturer. Almost all others have either closed down or shipped their manufacturing offshore. But he remains determined to prove that there is a model for a domestic clothing industry, to protect the jobs of his employees, and to continue to develop and build the business to which he has devoted the past 30 years.

The quake of February last year saw some liquefaction around his factory and damage to his precision knitwear and industrial sewing machines. But, in the short term, they were, as I understand, able to get things up and running again - at least temporarily. In the longer term, the land on which his factories sit has been tested and found wanting. Like extensive areas of Christchurch it sits atop a subterranean stratum of "jelly".

He now faces the Herculean task of relocating his production line: of buying alternative land, rebuilding the factories, of moving the operation holus-bolus; in many respects, of starting over.

He needn't. In one of the few positive insurance-inflected tales I've heard from that troubled city, the claims were accepted and the cheque duly arrived. Rebuilding and starting over would not be totally covered by the payout and substantial personal reinvestment would be required.

Why should he bother?

Why not simply shut up shop, deposit the money in the bank, and put his feet up?

Many people would, but not my friend. There was the matter of his employees, their collective expertise, their loyalty and their livelihoods. There was his own 30-year investment of time and energy, making something, building it up, gaining hard-won skills and experience. There was the none-too-small matter of leaving something for the next generation to get their teeth into.

There remained a point to prove about domestic manufacturing.

And there was that quiet, self-effacing but steely resolution he would not so easily be defeated by a tectonic hiccup or two.

Everyone has an earthquake story to tell he reiterated; nobody is untouched. And neither was I.

Dropping him off at his home in a relatively unscathed suburb of Christchurch, I continued south with newly acquired respect and understanding, not to mention admiration, for my friend and his ilk who daily still do battle with fallout from the city's annus horribilis.

I had ventured north to the Nelson environs for a wedding - the second in consecutive weekends, the first of a niece, the second a nephew. Each involved a spouse from another country.

The first brought a contingent of Australians to Queenstown, the second extended family and friends of the bride from Canada to the north of the south. But there were also people who had travelled from far and wide, to witness vows and to help celebrate the occasions. They had flown in from China, from Sweden, from Norway, from London, from Russia and elsewhere.

It was a reminder of how the globalised, downsized world in which we live continues to impact on us in myriad ways. Our young continue to travel and work around the world, perhaps more than ever forging links, friendships and, in some cases, marriages; just as we host the young of other countries in probably greater numbers than before.

We are, and have always been, a nation of immigrants. Who knows where the respective newlyweds in my whanau will ultimately end up, but meeting the new additions, and their own families and friends, one feels enriched, and amid the all-too-prevalent gloom of the political and economic realms, warmly optimistic.