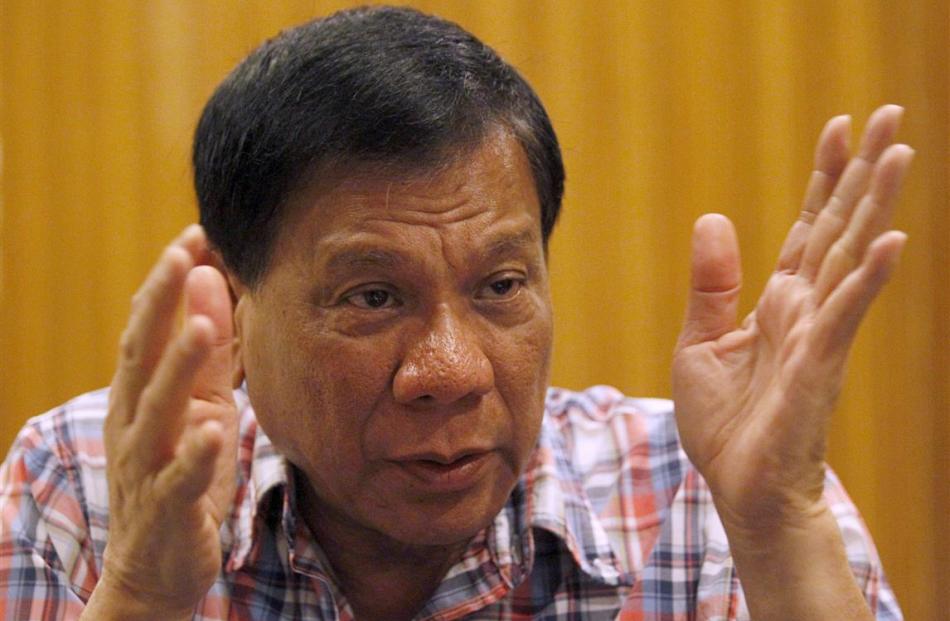 Rodrigo Duterte's intentions are not clear. Photo from Reuters.

Rodrigo Duterte, who has just been elected president of the Philippines, comes across as Donald Trump on stilts.

He talks dirtier (last week he called the outgoing president a "son of a whore''), and he can barely open his mouth without threatening to kill somebody (he recently promised to fill Manila Bay with the bodies of 100,000 criminals if he won). But the resemblance is only superficial.

For one thing, Duterte is not a fake tough guy. In Davao City, where he has been mayor for the past 22 years, a local priest estimates that death squads linked to him have killed more than 1400 people, mostly petty criminals and street kids.

Sometimes "Duterte Harry'' denies the death squads exist, sometimes he condones them, occasionally he hints that he does some of the killing himself.

Maybe so, maybe not, but what matters to the people who voted for him is that Davao City, once the most violent city in the Philippines and possibly in all of Asia, is now so safe that naked virgins carrying bags of gold regularly pass through its streets at midnight unmolested.

The man is a miracle-worker, or so it seems, and now he is going to work miracles for the whole country.

The miracle he is now expected to produce, however, is not just law and order. It is a more equal sharing of the prosperity that some in the Philippines are now beginning to enjoy, and that is a considerably taller order.

For many years, the Philippines lagged behind the other countries of Southeast Asia - Malaysia, Thailand, Vietnam, Indonesia - as they turned into "tiger'' economies and local incomes soared.

The wealth was not very evenly shared in any of them but at least, as their economies grew, even their poorest citizens enjoyed some "trickle-down'' effect, whereas this process had scarcely begun in the Philippines.

For the past decade, the economy of the Philippines has finally been growing fast: an average of 6% annually. Foreign investment has quadrupled, the budget deficit is down, more money is being spent on infrastructure - but in 10 years, there has been no trickle-down beyond the middle class. The poor are just as numerous and just as poor as always. So they voted for Duterte.

The establishment tried it best to stop this sinister populist. Outgoing president Benigno "Noynoy'' Aquino (who is constitutionally forbidden to seek a second term) tried to get the other presidential candidates to unite behind one candidate against Duterte.

He warned that Duterte would turn into a dictator. At a closing rally on Saturday, he told voters: "I need your help to stop the return of terror in our land. I cannot do it alone.''

They didn't listen. Duterte not only won, he got almost twice as many votes as the candidate who came second, and he is going to be the president of the Philippines for the next six years. So what will he actually do with his mandate? Nobody knows, because he hasn't been very forthcoming about his intentions.

For example, when the presidential hopefuls were asked what they would do about their country's bitter dispute with China over islands in the South China Sea that are claimed by both of them, the other candidates offered detailed strategies for asserting the Filipino claim. Duterte said he would go out on a jet ski and plant the Filipino flag on one of them.

So, then: impulsive, headline-grabbing, not best known for his joined-up thinking ... Starting to sound like Trump again, isn't he? But there are things about Mr Duterte that suggest a more complex person behind the facade.

He has been a prominent supporter of lesbian, gay, bisexual and transgender groups in Davao, which is definitely not a vote-winning position in the deeply Catholic Philippines. He has been trying to restart the stalled peace process with the Muslim minority in his home island of Mindanao, and insists that it must address the injustices that have been committed against Muslims.

Not really your run-of-the-mill populist after all, then, but it still feels like the Filipinos have made a serious mistake in voting for Duterte. There's just too much macho bluster, like this gem from his final campaign rally in Manila on Saturday: "Forget the laws on human rights. If I make it to the presidential palace, I will do just what I did as mayor. You drug pushers, hold-up men and do-nothings, you better go out. Because I'll kill you.''

He's also prone to say that if the country's democratic institutions get in the way of his anti-crime crusade, then he'll abolish the Congress and rule as a "revolutionary government''. His entertainment value is undeniable, but Filipinos may come to regret giving him the keys to the presidential palace.