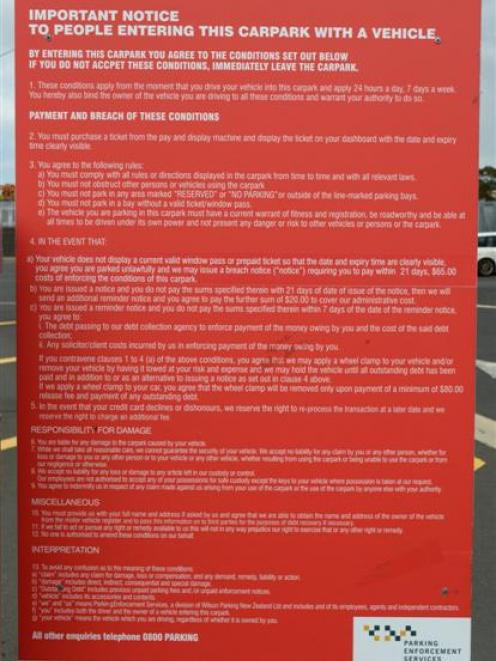 The Wilson Parking sign as you drive into the car park on the Anzac Ave side of Forsyth Barr Stadium. Photo by Gerard O'Brien.
''M'lud, may it please the court, I represent the defendants in this case, which in the opinion of any sensible practitioner of the law should never have come before this august assemblage of the finest minds in the profession, excepting perhaps my learned friend the prosecuting counsel who is, incidentally, neither learned nor my friend.

''If there is to be any honesty here today I will, with your kind permission, refer to him as 'my ignorant enemy?' Thank you, m'lud.

''The ridiculous charges, touching as they do on issues of overcharging, questionable business practices and being generally a touch overbearing will be easily disposed of by my good self in the next few minutes.

''My client, as the members of this intelligent and fair minded jury well know, is a highly respected, long established firm with connections to that centre of integrity and business honesty the picturesque ex colony of Hong Kong.

''Our connection is with the Australian arm of the firm and can a country which gave us cricket sledging, the bloke with the wobble board and Sir Les Patterson be anything but a beacon of hope in a naughty world?

''For 40 years or more, not 30, but for 40 long, devoted years my client has administered car parks in more countries than my ignorant enemy has even heard of. In New Zealand, over 100 car parks sites bring a sense of wellbeing to over 40,000 motorists every day.

''Forty thousand! Some of you will be multiplying that figure by $65 and then by 365 and coming up with $949 million. But, members of the jury, you must put such irrelevant calculations to one side because we are here to establish the facts.

''The fact is my client makes much less than that endeavouring to meet the sacred responsibility to their shareholders.

''Reject at once any suggestion that my client is not ethical. Remember that the firm operates here in Dunedin only after a vigorously competitive tender process at the invitation of your very own Dunedin City Council, and what finer example of financial acumen and fiscal reliability could be found in this country?

''These matters arose after an incident at the Stadium. Like the city council and the citizens themselves, we are all paying the price for this venture.

''My client, like most of us, was presented with a picture of endless high profile events like rugby tests, Cliff Richard concerts and Papal visits being but part of a vibrant meeting place with constant ''Car Park Full'' signs.

''Such has not been the way of things and the much underused car park has become something of a financial embarrassment. Add to this lack of fines issued at my client's smaller park near the Hocken Library, where the ill paid historians who use that marvellous library zealously avoid over parking.

''In fact the $65 fee, less than the cost of a bottle of very ordinary Beringer Cabernet Sauvignon Knights Valley 2012, I might add, has become something of a lifeline for my beleaguered client.

''It is clearly explained on the noticeboards and any motorist with half an hour to kill will find it in print quite large enough for people with normal sight. If their sight is inadequate, then should they be driving, m'lud?

''Should they be driving? Now there's a real issue. In Hong Kong the shareholders, quite rightly, await their dividends.

''There is already, I believe, pressure on the board to do away with the $65 fee altogether and replace it with a regime of immediately impounding the over parked vehicle, towing it to a central point and along with other transgressing cars putting it up for auction at the end of the day.

''Proceeds, minus the auctioneers' and towing company's exorbitant fees, to go to my client in partial recompense for the trouble of having to deal with motorists who seem unable to accept that `time is up' means 'time is up'.

''I can see already a starting tear or two on the faces of this intelligent and compassionate jury. They, given their heavy responsibility, are even more aware than most of us of the need to recognise my client's sacrifices and earnest endeavours in this most emotional of all business enterprises - car parking.

''I note, m'lud, that time, the winged chariot, is rapidly passing and there are several points I have yet to make. I wonder if I might presume on the generosity of the court and ask for a half hour adjournment while I pop out and feed the meter.

''My Audi is parked in one of my client's car parking sites. Don't want to have the thing towed away! Ha. Ha. But this is not a time for levity. I will be back within 30 minutes. Not a minute longer. I thank the court.''

Jim Sullivan is a Dunedin writer and broadcaster.