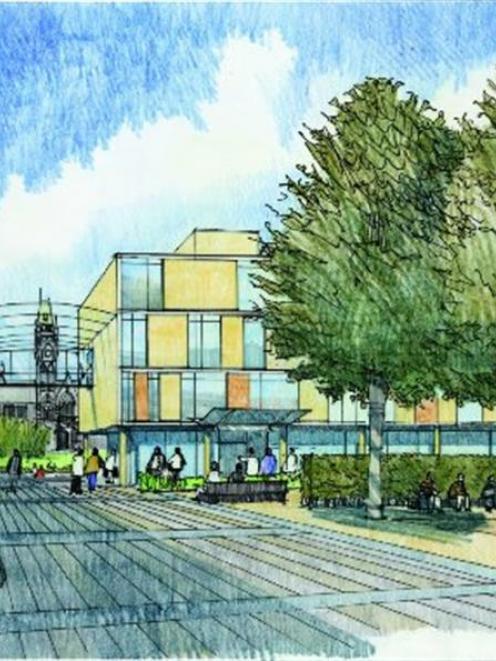 Attractive and efficient perhaps, but quite separated from city life. An architect's drawing shows a future view of the Clocktower past proposed buildings. Image supplied.
Peter Dowden looks afresh at the model proposed by the University of Otago's new master plan and wonders if it is not, in fact, a retrograde step.

Visit the foyer called "The Link" at the University of Otago and you'll see exhibited there a collection of "master plans" from throughout the ages, none of which were ever fully implemented.

The discarded plans range from more of those black basalt Gothic buildings pointed in Oamaru stone, to Stalinist-cum-British-council-estate brutal concrete (we may congratulate ourselves for evading that particular architectural fate).

Viewing the latest master plan, alongside all the others in the same foyer, it is hard to escape the cynical assumption that the present plan will never be implemented either.

The question then to consider is whether the status quo is such a bad thing.

The slow, steady expansion in a fruit salad of architectural styles, into buildings old and new, large and small, wherever they can be squeezed in, added on or converted provides the University of Otago with part of its charm.

Walk from the Octagon to the university and you are never quite certain that you have arrived as commercial and hospital buildings blend seamlessly into academic blocks.

Continue walking north and you won't be sure where precisely you leave.

The alternative to this amorphous university is the walled university of contiguous buildings, linked by closed streets and courtyards: an academic ecosanctuary.

All of the abandoned plans, and the latest master plan, lean towards this ideal.

It is very much an American model.

Universities in the United States often have walls, gate houses, their own police forces even.

Otago's Campus Watch safety patrols could be indicative of this approach.

The website Google Maps is a useful tool to analyse universities' spatial forms: type a university's name and a map of the respective city will be generated showing each department with its own orange blob.

Stanford and Princeton in the US (and Massey and Canterbury in New Zealand) give a sharp concentration of blobs in one corner of a city.

These are universities with boundaries.

You are either in town or "gown".

Enter "University of Oxford" or "University of Cambridge" into Google Maps and you see a scatter of markers, more concentrated in the centre, but spreading right out into the suburbs.

These British universities adopt the whole town as their campuses.

The University of Otago map sits somewhere in between.

Our university draws many of its traditions and styles from the British universities, and it should examine the spatial forms of "Oxbridge" before embracing the walled precinct model.

The questions to consider are: have the present scattered forms of Otago, Oxford and Cambridge impaired scholarly achievement? Will a walled campus make Otago more successful? Is it worth the high capital cost?So what might a scatter-form University of Otago look like? The city has many large commercial buildings, left by the steady decline in Dunedin-headquartered companies after the gold rush ended.

Could New Zealand's former premier financial district, in Queens Gardens and the Exchange, house the faculty of commerce? This would be a return to the original site of the university, in the building that later became the stock exchange, where John Wickliffe House now stands.

Wakari Hospital is stoutly built but oversized and below modern standards for healthcare needs.

Could this be the headquarters of the medical school? Clinical departments would need to remain within Dunedin Hospital, but the academic departments could relocate to an area with plenty of room for expansion.

Retailers could fund the move by expanding on to prime real estate in the back courtyards of the present medical school.

Is the abandoned Carisbrook an ideal site for a few departments? There is certainly plenty of potential student housing nearby.

A dispersed university would take the heat out of North Dunedin for student housing, transport and parking.

A downtown expansion could revive the Exchange-Queens Gardens area at least as well as any "I'll believe it when I see it" hotel.

Abandoning the idea of a walled campus might break down walls in people's minds too.

A university could do no better than to be "out there" in the community.

The physical form will always influence the "town and gown" relationship.

Dunedin has always been and should always remain New Zealand's premier university city.

The present master plan could create merely a "city with a university".

New Zealand has plenty of those.

Peter Dowden is a Warrington resident.