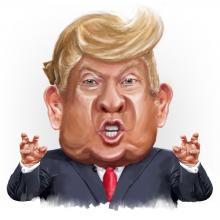 Donald Trump. IMAGE: MATT PATCHETT
OK, which one of you is the truth?, asks Gina Barreca.

Select Americans have become richer since Donald Trump took office, but America has been impoverished.

Not only is truth no longer self-evident, but truth is now in a line-up next to five alternative facts, deliberately chosen because they so much resemble the truth to the untrained, careless or myopic eye that it’s troublesome to tell them apart.

It’s exhausting to put time and effort into distinguishing between what’s authentic and what’s fake, and it’s risky to stake our reputations to facts that could be clever counterfeits, handed to us by the nice man with the Russian accent.

That’s why we’re fascinated by Antiques Roadshow: we want somebody else to act as the expert when assessing something’s true value so that we can then agree, saying we knew all along. We could have told you that grandma’s homemade teeth were worth $3000; the only reason we didn’t was because we didn’t want to ruin your surprise.

Do you trust yourself to know what’s real from what’s fake and to know the truth from the lie?

Or are you as secretly nervous about your ability to distinguish the genuine from the counterfeit — as was the overworked cashier to whom I recently handed a $50 bill, not unreasonably, to cover a $42 purchase?

I think we are increasingly, as an electorate, wary of being conned, and for almost the same reasons as the poor cashier. As English essayist Charles Caleb Colton wrote, "Pure truth, like pure gold, has been found unfit for circulation because men have discovered that it is far more convenient to adulterate the truth than to refine themselves."

Convenience is the enemy of truth, because the truth is complicated. You cannot explain climate change in a 280-character tweet. Lies are usually told to make things easier in the moment, only to run headlong into complications later on.

Having permitted our current selves to put our future selves into pawn, most of us pay a steep emotional, psychological or spiritual vig for such cheap moments of relief.

Some say we live in a post-truth world, which is truly terrifying — but it could be propaganda, spewed by those who want us to drown in doubt. It is a comfort to know that the truth does exist, must exist and will always exist, even if it’s hidden in a crowd of charlatans, and even if it’s more complicated than we’re prepared to accept.

Some folks, of course, love the lie that they live. One of my favorite 19th-century American humorists, Henry Wheeler Shaw (who wrote under the name "Josh Billings"), put it succinctly when he pointed out that "As scarce as truth is, the supply has always been in excess of the demand."

If all that free speech guarantees is that the loudest, most powerful and most unscrupulous voice can shout down and silence the rest, we have swerved so far off the path established by the First Amendment that we’ve hit the guardrails, spun around and are now heading in the opposite direction.

If the message being shouted by that unscrupulous voice is essentially a series of manufactured lies, as phony as a cartload of knock-off Vuitton bags, and if those lies are chanted enough to pass for the real thing, then we’ll discover what we, as a people, are worth.

That’s when we’ll realise there’s no substitute for wisdom, that nobody can be satisfied by ersatz goods, and that we can’t recoup our losses.

An imitation handbag can be thrown away. The results of an imitation presidency will last longer.

If we want spray-on gold, we’ll get it. If we choose a leader who treats Nato the way he treated his ex-wives — with threats of abandonment alongside repeated attempts to get them to agree to less money — then we’re validating those values.

Let’s hold the presidency up to the light and see if it’s real. Let’s not decide to make any irrevocable gesture simply for the convenience. — TCA

"Not only is truth no longer self-evident, but truth is now in a line-up next to five alternative facts, deliberately chosen because they so much resemble the truth to the untrained, careless or myopic eye that it’s troublesome to tell them apart."

Defining what is true, has been the quest of the conscious mind since it came into being.
Accepting a prescribed truth is to submit to dogma.
Dogma is a prescribed doctrine proclaimed as unquestionably true by a particular group and it is usually accompanied by belittling those that don't subscribe.
The above quote, is a classic case in point.
In the political world, what is true to you might not be true to me and what is true to you at age 18 will most likely not be true to you at age 60.
If it is, you have learnt nothing on your journey through life.
To have an English professor at the University of Connecticut proclaim there is only one truth that people should live their lives by, demonstrates clearly to me how dysfunctional higher learning has become.
I would like to believe that our universities are immune to such a cultural dysfunction but I see very clear signs that this is not true.