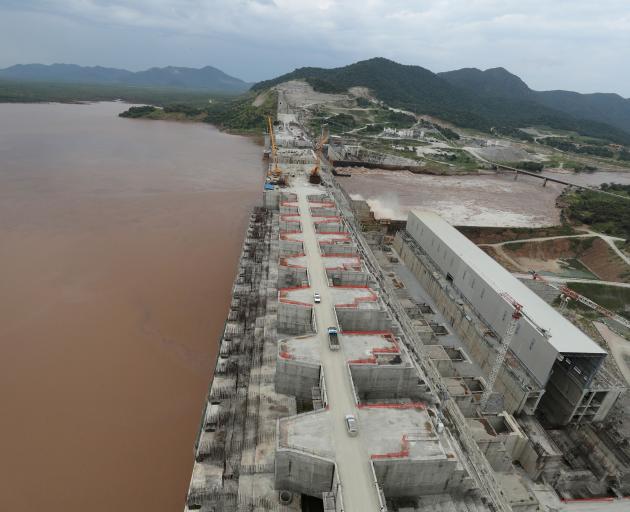 He should have got the prize, Trump said, because it was he who had prevented a war.

"I made a deal, I saved a country, and I just heard that the head of that country is now getting the Nobel Peace Prize for saving the country.

"I said: ‘What, did I have something to do with it?’ Yeah, but you know, that’s the way it is," said Trump, philosophical as ever.

Real superheroes know that saving countries is a thankless task, but they do it anyway.

Part of the problem in this case, however, is that Trump was talking about the wrong country.

War is God’s way of teaching Americans geography, but Trump missed all of his generation’s lessons (heel spurs).

Eritrea, Ethiopia, Egypt, what’s the difference? They’re all in Africa, and they all start with E.

The conference where Trump allegedly saved a country was about preventing a war between Ethiopia and Egypt, not between Ethiopia and Eritrea. The Nobel Prize Committee can’t give him a prize for his walk-on role in those talks because Egypt-Ethiopia is not a war-that-didn’t-happen (here’s your Prize), just a war-that-hasn’t-happened-yet (no prizes).

Three months later that war still hasn’t happened, but it might.

In fact, the deadline for an agreement in months-long direct talks between the main parties in the dispute, Egypt, Ethiopia and Sudan, passed on Wednesday.

Now the dispute goes to the three heads of government to agree on a mediator — and if they can’t agree, maybe we’ll see our first real "water war’’.

Various think-tanks have been touting the idea of water wars for decades. (Never ask the barber if you need a haircut, never ask a think-tank if there’s a risk of war.) But this time they might hit the jackpot: a war between Egypt and Ethiopia, each with 100million people, and Sudan as piggy-in-the-middle.

It would be hard to arrange, since Egypt and Ethiopia don’t share a border, but they do share a critical water resource: the Nile.

Ethiopia is building a huge dam — the Grand Ethiopian Renaissance Dam (GERD) — on the Nile, and Egypt is very unhappy about it.

So unhappy, in fact, that it would be no surprise if there were Ethiopian anti-aircraft missiles hidden in the hills around the dam site.

Egypt depends on the Nile for almost all of its water — it’s basically a big river flowing through a desert — so it’s very sensitive about people tampering with the source of that water.

The branch flowing out of the Ethiopian highlands, the Blue Nile, accounts for 85% of that flow, so Cairo is bound to get twitchy when Ethiopia starts building a dam on it.

On the other hand, the GERD is strictly a hydro-electric dam, meant to double Ethiopia’s supply of electricity.

They’re not taking any water out for irrigation, so all the water should just flow through, spin the turbines, and carry on down to Sudan and Egypt.

The only water lost would be the relatively small amount that evaporated in the reservoir.

That’s the theory, but in practice there are two problems.

One is just filling the dam’s immense reservoir. That’s 74 cubic kilometres of water that will never flow down the Nile: a full year’s flow if you took it all at once.

But then everybody in Egypt would starve, so the dam must be filled over a period of years.

The dispute is about how many: Ethiopia wants four to seven, Egypt is talking more in the region of 12 to 21 years, to fill it up gradually.

That’s even before they get into the details, like what would happen if there was to be a succession of drought years? Would Ethiopia go on filling the reservoir anyway, or would it stop, maybe at the expense of enduring big power cuts because the dam was still not producing its planned electrical output?

With goodwill it could all be sorted out, but goodwill is notable by its absence.

Egypt is a brutal military dictatorship; Ethiopia is a democracy.

Egypt is the traditional great power of the region; Ethiopia is the rapidly rising rival.

And the Egyptians, naturally enough, are paranoid about the Nile: even without the dam, their rising population means they will face grave water shortages within five years.

Back in 2013, at a conference to discuss the dam, senior Egyptian politicians discussed ways of destroying it with then-president Mohammed Morsi. (They didn’t realise the meeting was being televised live.)

The preferred method seemed to be backing Ethiopian anti-government rebels, but as Morsi said, "All options are open".

The man who overthrew Morsi, General Abdel Fattah el-Sisi, is certainly no stranger to violence — and Ethiopia will start filling the reservoir this summer.