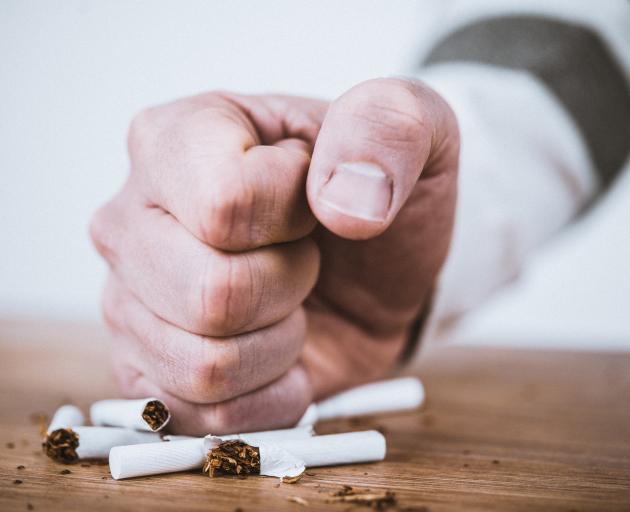 The Smokefree action plan interventions will encourage people who smoke to quit and reduce the risk they will subsequently relapse. PHOTO: GETTY IMAGES
Implementing the Smokefree 2025 action plan will save lives, writes Richard Edwards, Janet Hoek and Andrew Waa.

Public health practitioners are used to frustration and disappointment. Until recently, calls to introduce evidence-based interventions to improve health, such as sugary drink taxes and controls on alcohol marketing, have been mostly ignored or have foundered due to political timidity in the face of lobbying by powerful vested interests. Public health gains have mostly been modest and infrequent.

However, it seems the times may be changing.

First, New Zealand’s pandemic response was politically bold, science-driven, and prioritised safeguarding population health over other considerations. It has rightly been praised all around the world. Now, Associate Minister of Health Dr Ayesha Verrall has proposed a plan to achieve the Smokefree Aotearoa goal of having minimal numbers of New Zealanders smoking by 2025.

The plan has received plaudits from the local health and smokefree sectors and from international experts.

So why has Dr Verrall’s proposed action plan generated such enthusiasm? The key reasons are that it is comprehensive and bold, builds on evidence and sound logic, and recognises the importance of improving the health of Maori and eliminating the unacceptable disparities in smoking in Aotearoa.

The plan includes a commitment to strengthening Maori governance in order to address the disproportionate harm that Maori suffer due to smoking. This also acknowledges the Maori leadership that led to the Smokefree Aotearoa goal, first proposed in the 2010 Maori Affairs Select Committee report.

The action plan proposes interventions to address long-neglected topics, such as controlling the supply and the design and constituents of smoked tobacco products. Measures include greatly reducing retail availability and introducing regulations to reduce the addictiveness and appeal of cigarettes, particularly to young people. These changes will make it easier for young people to remain smokefree and for smokers to quit.

The proposed interventions go beyond traditional ‘‘business as usual’’ approaches, which focus mainly on individuals, such as offering cessation support for people trying to quit. While important, such interventions will not be sufficient to achieve the Smokefree 2025 goal because they do not address the structural factors which encourage and support smoking uptake and are barriers to quitting. These factors include the easy availability of tobacco products in each and every neighbourhood and the highly addictive nature of cigarettes produced by the tobacco industry.

Currently, anyone aged 18 years or over can buy cigarettes and rolling tobacco from virtually every dairy, convenience store, petrol station and supermarket. The plan’s proposals mean tobacco will no longer be treated as a normal consumer product. The number of retailers selling tobacco products would be greatly reduced, and availability would be limited to a small number of specialist tobacco stores or, perhaps, community pharmacies where people who smoke and wish to quit could be better supported.

An increase in the minimum age of sale for tobacco products each year will make it impossible for young people (where smoking initiation largely occurs) to legally be sold tobacco products.

Cigarettes will have minimal nicotine content, and will become unsatisfying and non-addictive. Cigarettes with flavour ‘‘crushballs’’, an ‘‘innovation’’ introduced by the tobacco industry which appeals particularly to young people, will no longer be available.

Intensifying existing measures will support these new approaches. For example, cessation support for priority populations will increase, as will mass media and social media campaigns encouraging and supporting people who smoke to quit, and providing information about the smokefree goal and the measures being introduced to achieve it. Community-based smokefree activities will also be strengthened and better resourced.

Collectively, the action plan interventions will encourage people who smoke to quit and reduce the risk they will subsequently relapse. Young people will be much less likely to try smoking and become long-term smokers, greatly increasing the likelihood that future generations will be truly smokefree.

People who cannot quit smoking will be encouraged switch to less harmful e-cigarettes which will be cheaper, more widely available and may contain nicotine.

If the measures outlined in the Government’s Action Plan for a Smokefree Aotearoa discussion document are implemented promptly and in full, they will create a realistic opportunity to achieve the Smokefree 2025 goal and eliminate disparities in smoking prevalence.

We agree with a recent editorial in a leading health journal, which described New Zealand’s Smokefree 2025 Action Plan discussion document as setting out a ‘‘world-leading’’ approach that could prevent thousands of deaths in New Zealand. Moreover, the authors noted that New Zealand’s leadership could provide an international example that could save millions of lives around the world.