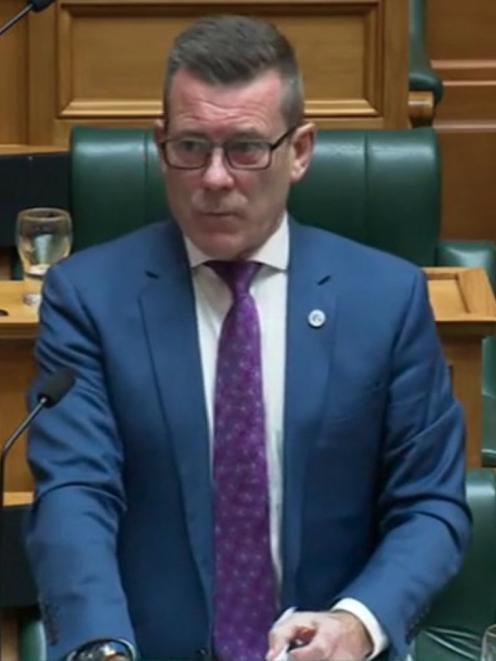 National finance spokesman Michael Woodhouse, worried about the independence of the Reserve Bank. PHOTO: PARLIAMENT TV
Late on Tuesday evening, just before the country got completely distracted by the rude reappearance of Covid-19 on its radar screen, Parliament took another step towards reimagining how the Reserve Bank operates.

While banking policy might seem far beyond most people’s daily concerns, the Reserve Bank of New Zealand Bill, being escorted through Parliament by Finance Minister Grant Robertson, will actually have a real-world impact on everyone.

The Bill’s purpose is to "promote the prosperity and wellbeing of New Zealanders and contribute to a sustainable and productive economy", which seems unarguable.

But quite how the Reserve Bank is to achieve that laudable goal, and at whose behest, are the deep questions which have led National and its finance spokesman, Dunedin list MP Michael Woodhouse, to oppose the kind of legislation which would usually receive bipartisan support.

The Reserve Bank — the central bank of New Zealand — issues the nation’s money, manages how much of other countries’ money we have in reserve and registers and supervises banks.

More broadly, it also decides and puts into action monetary policy — put simply, how much money there is in the economy.

How much you pay for something at the shop and what interest rate you, your landlord, or your shopkeepers pay on lending, is greatly influenced by what the Reserve Bank does.

The bank is at arm’s length from the Government, but under the legislation which sets it up the Government can tell the Reserve Bank what it would like its monetary policies to achieve — for example, keep inflation low.

However, it is meant to be independent, and that is the nub of Mr Woodhouse’s issue with the Bill.

Amendments proposed by Mr Robertson "quietly increase his influence over the ability of the Reserve Bank to do its job", Mr Woodhouse told Parliament on Tuesday.

"It’s for that reason, rather than maintaining the independence that was initially foreseen by this Act and actually that has stood the test of time, we are quietly eroding that independence."

Mr Robertson denied that he or a future finance minister would be influencing the Reserve Bank, and argued the law change would deliver "a very clear understanding" between the government of the day and the bank about how financial policy would be delivered.

"It is not a direction; it does not affect the bank’s ability to independently determine its strategic intentions and financial policy.

"However, just as they do with monetary policy, they need to have regard to the Government’s policy priorities and intentions."

Another objection raised by Mr Woodhouse was that the Bill would allow the finance minster to add functions to the bank’s work.

He had no problem if the bank did the asking, citing the uncertainty surrounding the bank’s role, if any, in managing the cryptocurrency market as an example of something the bank could ask for power to do something about.

But Mr Woodhouse had much more of a problem with finance ministers doing it themselves, especially without Parliament having a say on the matter.

"We will be moving motions, amendments to the Bill in the committee of the whole House to the effect that it will improve, I think, the independence and objectivity of this Act," Mr Woodhouse said.

"But I don’t hold my breath that they will be supported."

Mr Woodhouse will have plenty of time and space to ventilate his concerns.

The committee stages of the Bill are next week, and with 297 clauses and five schedules in its 172 pages, that offers ample opportunity for Mr Woodhouse to be pleasantly surprised ... but probably not.

You may, or may not, have been wondering what happened to all the ballot papers cast during last year’s election.

Parliament, helpfully, has just told us the fate of the 8372 boxes of voting papers it has in its possession.

By law, each ballot — and there were more than normal because of the referendums held alongside the election — must be stored for six months in case of any legal challenge, before they are shredded.

Previously they have been incinerated or pulped at a paper mill; this time they will simply be recycled. 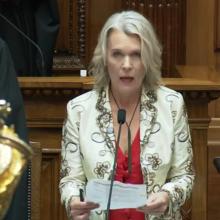 On Monday night Ms Leary was "present" via Zoom at a meeting of female parliamentary leaders from around the world as a women’s parliamentary ambassador for New Zealand.

You’re having a laugh 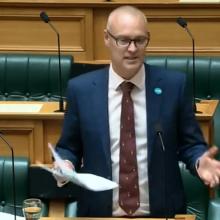 David Clark. Photo: Parliament
Dunedin MP David Clark had time to polish up many aspects of his ministerial performance during his exile from Cabinet, but his joke telling was not one skill which benefited.

On Thursday, in response to his first question as Minister of Statistics, Dr Clark told Act New Zealand MP Damien Smith he had waited "250 days, 64.11% of the year, two full CPI quarters", for such an opportunity, before signing off with "it is the only portfolio that truly counts".

Mr Smith, perhaps unsurprisingly, later issued a press release which said Dr Clark should be on his bike for telling such awful dad jokes.