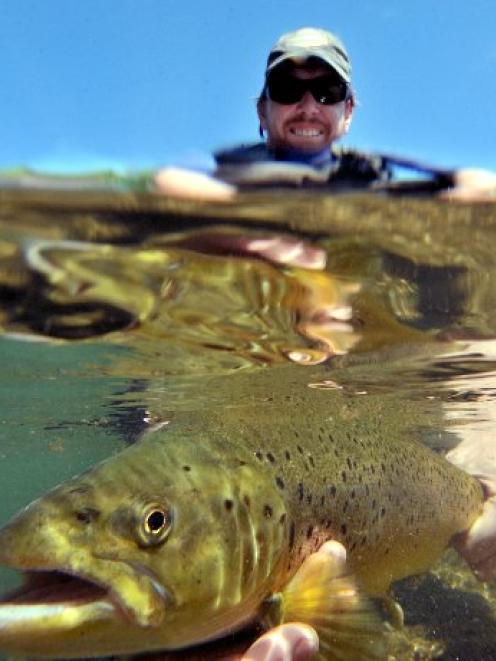 Otago Regional Council officer Dean Olsen prepares to release a brown trout he caught in the Shag River yesterday. Photo by Gregor Richardson.
Gradual improvements in water quality in East Otago's Shag River over nearly a decade have earned it the grand prize in the inaugural 2013 New Zealand River Awards.

''The Shag is the best little river in New Zealand,'' Otago Regional Council chairman Stephen Woodhead, said when he accepted the award at a ceremony in Wellington last night.

He said the award was for the river's community and recognition of the work landowners had done to improve practices on land through which the river flowed.

The awards, sponsored by the Morgan Foundation, aimed to recognise the most significant improvements in river health in the country.

Of the three finalists, two were from Otago, the Shag, which also won Otago's top river award and the third-placed Waikouaiti River. Harris Creek, in the West Coast, was second.

The judging panel - Prof Gillian Lewis, of Auckland University, Dr Clive Howard-Williams, of Niwa, and Dr Roger Young, of the Cawthron Institute - determined the award winners based on the results of the regional council's long-term water monitoring of the Shag.

The results showed significant improvement in E.coli levels in the river in the past 10 years, with levels recovering 13% a year since 2004, when the council's water plan was instituted.

Together with minimum flows and good farming practices, including fencing and reticulating stock water, it made the river stand out, the judging panel said.

Regional council resource science manager Matt Hickey said he attributed having two Otago rivers in the final to having tight communities which valued their rivers.

Long-term monitoring was needed to show how land-use changes impacted on water quality.

''It takes five to 10 years. We're not talking instant gratification.''

There were ''grumbles'' 10 years ago when the water plan and minimum flows were introduced, but now the community was seeing the results of its work.

''You can see it works. We do have bottom lines, but they do have positive outcomes.''

Mr Woodhead said E.coli concentrations in the Shag and the Waikouaiti had reduced markedly in recent years because of sound management practices employed by farmers in both catchments.

''It was a huge pleasure to accept the award, particularly on behalf of farmers and others in the catchment, who have worked hard to implement rules in the Otago water plan,'' Mr Woodhead said.

''We are immensely gratified that these important awards have recognised an Otago river.''