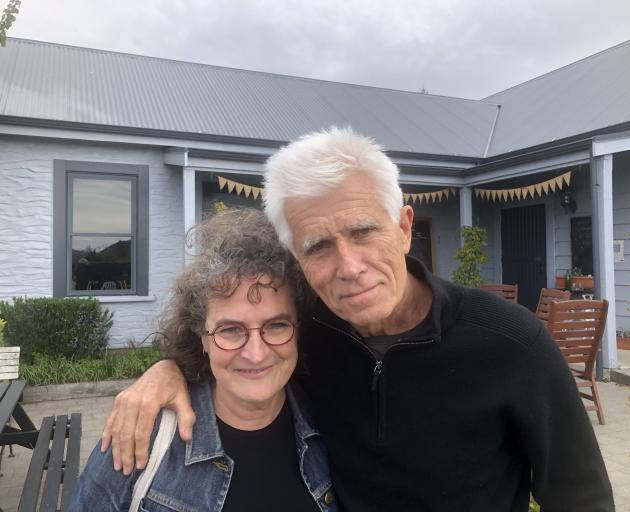 Author Kate De Goldi enjoyed the epic vistas from Henderson House where she has just finished a 12-month residency. PHOTO: KERRIE WATERWORTH
Award-winning children’s author Kate De Goldi says the world around her inevitably creeps into her writing. She told KerrieWaterworth about how the Central Otago landscape and climate shaped her and her photographer husband Bruce Foster’s work during their past 12 months as artists-in-residence at Henderson House in Alexandra.

A phone call can change everything.

In early 2019, celebrated author and twice winner of the New Zealand Post Children’s Book of the Year Award Kate De Goldi received a call from Henderson House Trust chairman and artist Grahame Sydney inviting her and her husband, photographer and videographer Bruce Foster, to be artists-in-residence in the Alexandra house and gardens for a year.

Initially, she thought it would be very hard to shift her life of writing, publishing, working with schools, teaching an online creative writing course through Massey University, and her involvement with the National Library Foundation.

"Then I asked if we could start in September, because I had this idea I wanted to see it from spring to spring, and because I come from the South Island - Canterbury largely and the West Coast - it seemed like a golden opportunity.

Henderson House in Alexandra.
Henderson House, in Earnscleugh Rd, was the home of Alexandra arts philanthropists the late Barbara and Russell Henderson.

It was designed by Austrian emigre Ernst Plischke, who designed more than 40 private houses and the landmark Massey House, Wellington’s first modern high-rise - but this was his only New Zealand house built of stone.

Built in the 1950s and on the "other side" of the river, it has views across the Alexandra township and the Dunstan and Hawkdun mountain ranges.

De Goldi said it was almost impossible to put a price on the effect of the landscape on her work and wellbeing.

"It is epic and beautiful and I am sure there is scientific data about how it affects you, but I just found it an enormously nourishing place to be.

"Every season has been magnificent. Bruce must have taken several million photos of clouds, he has just been so excited by it."

"You are on a treadmill in your life, and it is really good every now and then to be obliged to take time out."

She said all her books were set in Christchurch where she grew up, "because it is where my imaginative landscape is", but bits of Central Otago had crept into this book, particularly fog.

"Inevitably, when you are writing, the world creeps in, and so there are also a lot of flowers in this book - some of them are in the Henderson gardens." 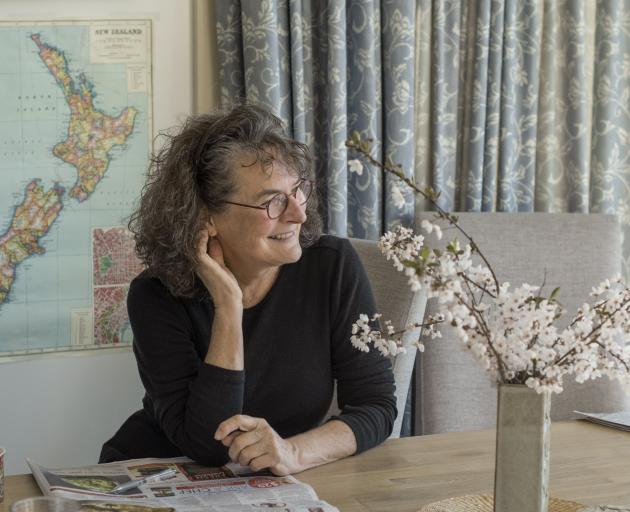 Author Kate De Goldi enjoyed the epic vistas from Henderson House where she has just finished a 12-month residency.
After living in Wellington for 23 years, De Goldi described being back in a small town as "bloody wonderful".

"People have been incredibly friendly. I think I have spoken at about six different service organisations and have been amazed at the activity in a relatively small place.

"You can park everywhere or you can just walk down to the supermarket, and I could drive up and down Cromwell Gorge forever. I have found it stupendous."

For the first six months of their residency, De Goldi and her husband experienced life in Central Otago before Covid-19 changed everything.

"I was quite flabbergasted by the rate of tourism and the scenes at Queenstown airport.

"I just think it was out of control and Queenstown is clearly, from what I understand from reading about it, has been like a giant Ponzi scheme, there are some dreadful inequities there.

"Then there is what is happening to the landscape and the immigrant workers who are paid so poorly and exploited.

"I am an outsider and so you have to be really careful about what you say, but that is my observation and from talking to people down here."

Two of those people were Grahame Sydney, of St Bathans, and poet Brian Turner, who lives in Oturehua, in the Maniototo region of Central Otago.

She said it was hard not to be aware of the "greening" of Central Otago when talking to people with strong environmental views.

In March, the Covid-19 crisis arrived and the country went into lockdown.

"We were in a deeply fortunate place to be [in Henderson House] during lockdown. There were no worries about work, we were safe and we could go into this amazing landscape to do our exercise.

"Having this time - as I imagine it was with everyone in one way or another - made me think about how I want to live, and maybe to dial down some things."

Today, De Goldi said, she would be "back in the harness", teaching her online creative writing course, running seminars and advocating hard for equal access for all New Zealand children to reading resources.

The virtues of reading for children were multifold, she said.

"It is not just that you are learning and developing or thinking, but you are also learning how to be alone and how to entertain yourself - and as my friend says, when you have a book you are never alone."

As a published author, De Goldi lamented the many changes in the children’s book publishing industry, such as the cult of the author, but she had praise for the Otago Daily Times.

"Every newspaper in the country used to have substantial book reviews but the only one that does it now is the ODT.

"Once you lose that critical infrastructure, it is actually really bad for the literature. Writers need critical response, they need not to be publishing into a critical vacuum, so that has been a real problem."

She was looking forward to unpacking the many boxes of books she had acquired during the past 12 months but, after experiencing four"dynamic" seasons in Central Otago, the one thing she was not looking forward to was Wellington’s weather.