One power pole toppled near a public walkway in Queenstown and whistle-blower Richard Healey said there were eight faults across the Central Otago and Queenstown Lakes network as of late yesterday afternoon. 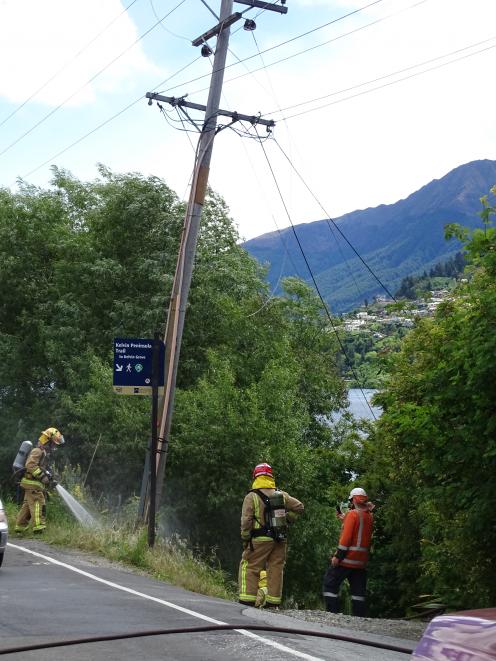 The legislation Aurora worked under stipulated the network should withstand much higher wind events, potentially up to 140kmh, than  Central Otago and the Queenstown Lakes experienced yesterday.

"The lines should laugh at the wind speeds that we saw today."

Aurora also had a responsibility to ensure there was a clearance zone so trees were not too close to lines.

A Delta staff member also told him a substation fault caused power to drop out at Delta’s head office in Dunedin yesterday and dropped the voltage across other parts of the network.

In Queenstown, a power line which fell near an access way to a public walking track was attached to a condition zero pole, last inspected in July.

Volunteer fire crews from Queenstown and Frankton were called to Peninsula Rd just after 3pm.

It was understood a transformer went on fire, which caused the live 11,000-volt line to fall near the Kelvin Peninsula Trail and an access way to it, setting grass, trees and shrubs on fire.

Vehicles were  temporarily  stopped as fire crews worked to extinguish the fire and Delta worked to cut off the power to the line, affecting about 1000 customers.

Being condition-zero, the pole is unsafe to climb, unfit for the actual load and could fall at any time.

Mr Healey said the red-tagged pole had been installed in 1978, and its condition-zero rating meant it would be very difficult to reinstate the line.

Given it was last assessed in July, it had been left to stand for about four months, despite being found to be "severely compromised", he said.

Delta marketing and communications manager Gary Johnson said late yesterday afternoon the company was working to restore power, assessing damage and responding "where it is safe and possible to make repairs".

"The safety of the public and line crews is of primary importance at all times."

Mr Johnson attributed the incident to high winds in Central Otago yesterday, warning people should be conscious of the possibility of electricity-related hazards and power outages.

He advised people to keep well clear of fallen power lines, or damaged electrical equipment, and treat them as live at all times and to watch out for falling tree branches which could cause damage to power lines.

A MetService forecaster said gusts up to 80kmh were recorded at Queenstown Airport yesterday and 100kmh at Alexandra. The strongest gust recorded yesterday was 117kmh,  at Secretary Island, in Fiordland.

Strong northwesterly winds were felt across the length of New Zealand yesterday and "Otago", which covered Clutha, Southland, the Canterbury plains and high country, would remain under a watch until this morning.

"When they arrived there was a small vegetation fire which they quickly dealt with."

During the callout one fire truck was redirected to a property on Briggans Rd in Alexandra where the aluminium wall of a neighbour’s garden shed had blown on to an elderly woman’s property.

Then, at 5.30pm, an Alexandra fire truck was sent to Letts Gully Rd, near the town, where another tree had fallen on power lines, he said.

Firefighters waited briefly to ensure sparks coming from the lines did not ignite anything, before heading back to the station.

In Dunedin last night gusts reached 120kmh at Swampy Summit, and 78kmh at the airport.