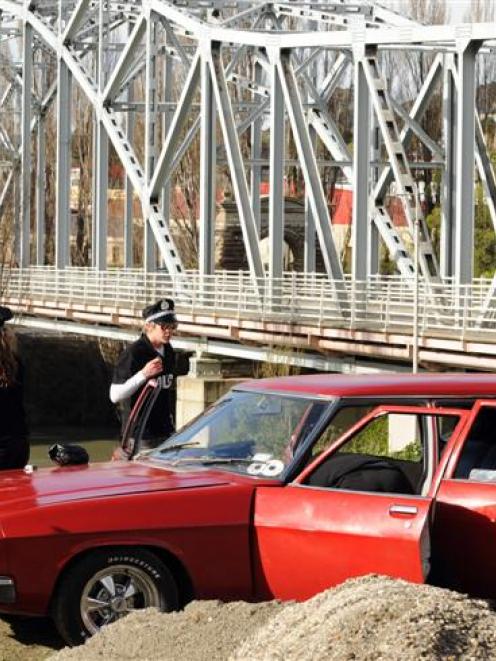 Cars loaded with with youths were pulled over at police checkpoints at the entrances to Alexandra on Saturday, and any alcohol found was confiscated. Photo by Stephen Jaquiery.
Police arrested 38 people at the Alexandra Blossom festival over the weekend, with 21 of those arrested found to have breached the temporary liquor ban.

Other arrests were made for offences such as disorderly and offensive behaviour.

There were checkpoints at the Alexandra town limits on Saturday to prevent alcohol entering the liquor ban area.

Only a small amount of alcohol was seized at the checkpoints.

Senior Sergeant Mike Cook, the officer in charge of Central Otago, said the message police had been sending out about the Blossom Festival had started to stick.

He said the effect of the liquor ban had led to a reduction in the overall levels of intoxication being exhibited by some festival patrons.

"Police still harbour concerns at the extreme levels of intoxication some teenagers are managing to subject themselves to," he said.

"It is a satisfying outcome for the Alexandra Blossom Festival committee and for the community."

Although police made three more arrests than last year, when 35 people were arrested, police said they were impressed with the behaviour of crowds at Saturday's float parade and other events.

All people arrested over the Blossom Festival weekend are due to appear in the Alexandra District Court on October 22.

Fifty-five police worked in and around Alexandra during the Blossom Festival weekend, including those in drink-drive units and highway patrol teams.

Eight men were arrested in Wanaka for alcohol-fuelled incidents during the weekend.

Constable Mike Thomas said three carloads of intoxicated occupants from Gore arrived in Wanaka after spending the day at the Alexandra Blossom Festival.

Three 19-year-old males from Gore were arrested by police on the Wanaka lakefront for disorderly and offensive behaviour on Saturday evening.

A 21-year-old Auckland male was arrested and charged with assaulting a female at Shooters Bar on Saturday night.

Two 19-year-old Dunedin students were arrested for disorderly behaviour on Brownston St, and a 31-year-old Wanaka male was arrested on Saturday and charged in relation to an assault, allegedly committed last month.

A 28-year-old Cromwell man was arrested for wilful damage of a motor vehicle yesterday morning.

All of the eight arrested men are scheduled to appear in the Queenstown District Court on October 6.