As growth in Omakau continues, Omakau Auto Centre owner Tony Herbert reminds of the impact proposed minimum flows for the Manuherikia River could have on small rural towns such as Omakau. PHOTO: YVONNE O’HARA
Omakau has put on a growth spurt in the past three or four years.

The resident population has grown and the school roll has increased, thanks in part to tourism but also to the 20 or so family homes in a new town subdivision.

Omakau Auto Centre owner Tony Herbert said while more people were passing through because of the Otago Central Rail Trail, the new residents who had built homes on a subdivision in the township also had flow-on benefits for businesses.

‘‘It is the price of land that attracts them,’’ Mr Herbert said.

‘‘The subdivision, which started about 10 or 15 years ago, had only two houses on it for a long, long time

‘‘However, in the past three or four years it has filled up with 20-odd houses.

‘‘People were moving to the area from Queenstown, Wanaka, Cromwell, and even Alexandra and Clyde as housing got too expensive [there] for many people.’’

As well, farming changes have brought in new farming staff, along with their families, which has added to the growth.

‘‘We needed young people to keep the community going for the schools, the shops and the garage and that is where it [the growth] has come from.’’

He said he now employed seven staff, up from three a few years ago. 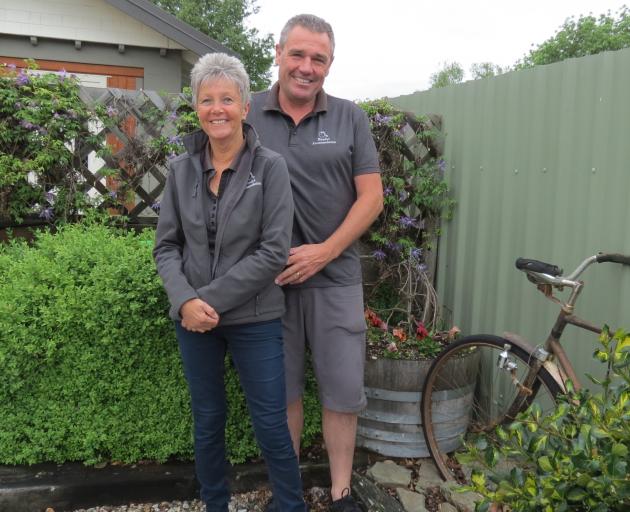 Omakau business people Mandy Stevenson and Colin Stevenson, who is also the Omakau Ratepayers Association chairman, consider how much busier Omakau is getting, both with tourist numbers from the Otago Central Rail Trail and from a subdivision that brought more young families to the township. PHOTO: YVONNE O’HARA
Omakau Primary School board of trustees chairman Murray Kirk, of Becks, said the school had gained about 30 pupils from new families and now had a roll of 76.

Mr Kirk owns Becks Shearing Ltd and said while farming was going well, he, like other farmers and contractors, found it difficult to get more staff.

‘‘Agricultural contractors [in the area] have to go overseas to get Irish and English staff.’’

Cen Eng Ltd staff member Matt O’Malley returned to Omakau five years ago and noticed the busier traffic, which he attributed to tourists attracted by scenery from The Lord of the Rings, which was filmed in the area, and the unspoilt nature of Poolburn.

Muddy Creek cafe owner Pauline Huddleston said she had been in business for 12 years and as more families moved to the town, she had become busier.

‘‘I have seen the town growing with a lot of young families coming in, and some have come back to join family businesses.

‘‘They are coming back from overseas to live here and it is great for the school and great for business.’’

Blacks Hotel owner Alex Stoddart said he was seeing an increase in visitor numbers from Dunedin and Queenstown for ‘‘mini breaks’’ during the winter.

She said the business was usually full from September through to April, with up to 24 people a night staying, and it had got busier in the past two or three years.

He said there were plans for a community hub, new public toilets, a scout den relocation, new signage and further landscaping.

Resident Lorraine Bennett said while the township had been quiet for many years, there was increasing interest in it.

A couple of new homes were being built and she was aware of several building consents that were under way.

Mr Herbert said while the town was vibrant, he was concerned about proposed minimum flow rules for the Manuherikia, which he saw as a possible threat to the township’s viability.

‘‘The minimum flow is very well governed by irrigation companies and we don’t have an issue with it at the moment.

‘‘If minimum flows are knocked back [for the Manuherikia] it will be tough for farmers who could not irrigate as much as they do now.’’

He said that would impact on the farmers’ ability to farm, as well as the number of staff employed, which could lead to families leaving the area, and reduced business for small towns.