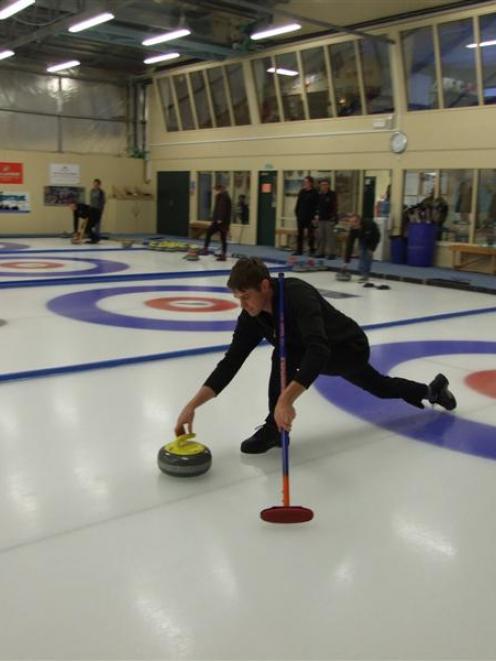 Dan Thurlow, of Becks, sends a stone on its way. Photo by Lynda van Kempen.
An international curling rink in Naseby? It seemed a lofty goal more than 15 years ago, but a decade on from its opening the facility is still going strong and exceeding all expectations.

''People seeing it for the first time tend to be a bit bemused at finding a facility of this standard in the middle of what they call nowhere - but what we call the centre of the universe,'' Maniototo Curling International (MCI) rink manager Ewan Kirk says.

The rink opened 10 years ago and the milestone anniversary was marked with a curling match at the weekend followed by a dinner attended by about 50 people.

''It was jolly hard to make it happen and get it, but it's been a huge success and exceeded all of our expectations,'' MCI's first chairman, Gerald Dowling, says.

''It's been very satisfying.''

He chaired the first public meeting which gauged support for the venture 15 years ago.

''People turned up by the dozens; there was amazing support then and that's carried on through the years.''

The project was a massive one and took several years' planning, from deciding on an appropriate building design through to fundraising to make it a reality.

When it opened on July 30, 2005, the $1.5 million facility was the only dedicated curling rink in the southern hemisphere and it continues to hold that distinction. Volunteers played a pivotal role in fundraising, clearing the site and laying the pipework and sand base.

The facility is open year round and about 15,000 people visit every year, Mr Kirk says.

''Most are first timers who have heard about us through word of mouth but there are some repeat visitors, too, who come back and bring their friends.''

The nearby Otago Central Rail Trail provides the bulk of the visitors. The rink hosts regular competitions, coaching for school pupils learning the sport, training for representative players and tuition and gear for social groups wanting to try the sport.

An upstairs lounge provides good viewing of the rink and a venue for the social side of proceedings. Current MCI chairman John Mulholland says the rink is a big asset to the community but without the input of the volunteers and generous sponsorship by businesses, it would not exist.

One of the aims with the facility was to foster the sport and provide players with easy access to competition grade ice.

The number of Maniototo players selected for national sides, especially junior players making their mark, proves the value of having a venue like the Naseby rink, curling officials say.

The rink will soon host its third Winter Games and over the years it has hosted several other international tournaments.

''It's great to have it here as an added attraction, which is open year round. Lots of the first timers see it but don't understand what curling's all about and then get really mesmerised by it.''

The 400m steel track would be placed next to the ice luge which, along with the outdoor ice skating rink, is next door to the curling rink. The ice luge, ice rink and curling rink are marketed together as the Naseby Alpine Park .

The summer luge would complement the curling rink and ''give another string to our bow'', Mr Kirk says.