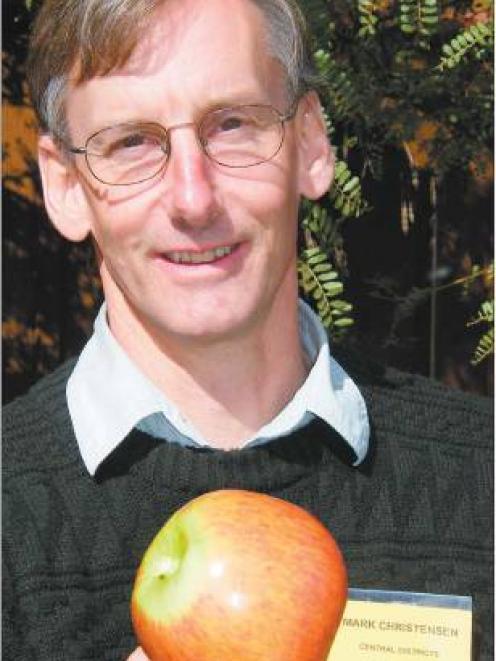 The full Monty: This Monty’s Surprise apple, discovered by Wanganui accountant Mark Christensen (pictured), is another weapon in the fight against cancer. Research into the anti-cancer properties of apples has placed this variety at the top of the list.
The humble apple may be your best defence against cancer.

Seedling and heritage varieties of apples are the ones that ‘‘pack the most punch'' when it comes to stopping the growth of colon and stomach cancer cells.

The New Zealand Tree Crops Association held its national conference in Cromwell during the weekend and one of the speakers was Wanganui member Mark Christensen, who outlined research into the anticancer properties of apples, initiated by the association's Central Districts branch.

‘‘Our work is based on the hypothesis that for every disease affecting human health, there will be a plant with the necessary compounds to treat the disease,'' Mr Christensen said.

Mr Christensen, who is an accountant, has always been interested in growing heritage apples and heirloom vegetable varieties.

Six years ago, he discovered a seedling apple tree on a Wanganui country road when he stopped to ‘‘stretch his legs'' on a long car trip.

‘‘The tree was very old, judging by its girth and it was the oldest and largest apple tree I'd ever come across.''

It appeared diseaseresistant and its fruit had good flavour.

It was ‘‘one of a kind'' and was later named Monty's Surprise after an old identity in the district.

Studies in Finland have already shown that people who ate five apples a week had the world's lowest rate of diabetes, heart disease and cancer, so the Central Districts branch of the association decided to get 250 apple varieties tested for anti-cancer properties.

Scientists in France and Australia as well as in this country are involved in further studies into the health benefits of the Monty's Surprise apple.

‘‘Everyone's been excited by the initial results of the studies and it seems that a very small amount is effective in inhibiting the growth of cancer cells,'' Mr Christensen said.

He is the research director of a charitable trust that has been established to carry out further apple studies.

By this winter, the trust will have grown and given away 5000 Monty's Surprise apple trees.

In a joint venture with Wanganui health authorities, the trust has been working to distribute the variety as widely as possible and to get stocks grafted to meet expected future demand.

Modern apple breeding programmes appeared to focus on ‘‘superficial'' criteria, such as looks, handling and storage, forgetting that good flavour was often an indication of the nutritional value of the fruit, Mr Christensen said.

The initial research showed that older apple varieties and fruit from seedlings ‘‘packed more of a punch'' than newer commercial varieties when it came to triggering ‘‘cell suicide'' in tumour cells.

‘‘Cancer is in your body for a long time before it gets to the point where there are enough cells for it to be detected,'' he said.

The trust is also carrying out similar research into the antioxidant properties of heirloom tomatoes and studying a natural extract from a desert plant that may delay the onset of Huntington's disease.