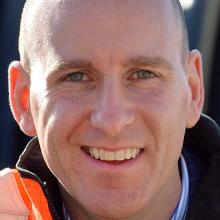 Grady Cameron.
Aurora Energy has been warned by the competition watchdog over using its market dominance to force farmers to use its sister company,  Delta, as a contractor.

The Commerce Commission warned the under-fire company its policy, which forces farmers in the Cromwell and Clyde area to give work to Delta when installing irrigation which had to be connected to its network, could be in breach of the Commerce Act 1986.

The commission decided not to take further action, saying the  cost of proceedings could be "disproportionate to the harm", but told Aurora to be more careful in future.

"While the commission does not intend to take any further action against Aurora, you should be aware that we had real concerns about Aurora’s conduct; and our decision to issue this compliance advice letter does not prevent any other person or entity from taking a private action through the courts."

If Aurora was found guilty of breaching the Act, it could be fined more than $10million  or three times the commercial gain resulting from the breach.

Aurora Energy chief executive Grady Cameron defended Aurora’s policy in a statement provided to the Otago Daily Times, saying it was needed because of rapid growth in demand for electricity for new irrigation installations in Central Otago.

"The significant growth and expansion meant we needed to extend the network and grow capacity to keep pace with demand."

Irrigation installations involved complex connections that required significant investment in capacity and infrastructure and it was important to make sure expansion was co-ordinated to avoid over- or underinvestment in supply capacity.

"The only sensible response was for Aurora Energy to manage applications for new or upgraded connections through its principal contractor, Delta, to balance the interests of customers and contractors."

The temporary measure was progressively withdrawn by May 2016 and followed a major $12million-plus upgrade of network capacity with the construction of new substations at Lindis Crossing, Camp Hill and Lauder Flat to address capacity constraints.The policy delivered the "right outcome" by allowing Aurora Energy to plan its network upgrades and investments and deliver services at the lowest overall cost to all customers.

The letter sent by Commerce Commission head of investigations Ritchie Hutton and supplied to the ODT under the Official Information Act, said it was apparent Aurora had "substantial market power" as it operated the only electricity distribution network in the Cromwell and Clyde area.

"In that context, we consider it is possible that in implementing the policy Aurora took advantage of its substantial market power for an anti-competitive purpose by excluding competing contractors from the management, design and construction of irrigation connections.

"This prevented farmers from choosing their preferred contractor to build an asset, towards which they were making a significant capital contribution.‘‘It is therefore possible that the policy breached the Act."

The company "should take steps" to ensure it was not at risk of breaching the Act in future.

"Given that Aurora has substantial market power in electricity distribution, and obtains services from a related party of Aurora [Delta] in related, competitive markets, it is important for Aurora to carefully consider the potential impact of its decisions on competition in these markets."

Aurora produced "limited" evidence to back the claim the policy was introduced because it was facing capacity constraints  and increased demands on that capacity from irrigation connection requests.

"However, Aurora had limited documentary evidence that showed the connection between the increasing demands and the policy.

"This led us to be sceptical of Aurora’s claims that the benefits of the policy would have outweighed the costs Aurora would have incurred in a competitive market.

"The lack of documentary evidence supporting Aurora’s claimed rationale for the policy challenged the credibility of Aurora’s explanations."

In future, Aurora needed carefully consider and document the impact its actions had on competition.

It was also recommended Aurora take legal advice when it was unsure  whether its actions breached the Act and that staff undertake compliance training to increase awareness about the rules.

The letter said the policy was put in place in December 2013 and ran until late 2015 in Cromwell and midway through this year in Clyde.