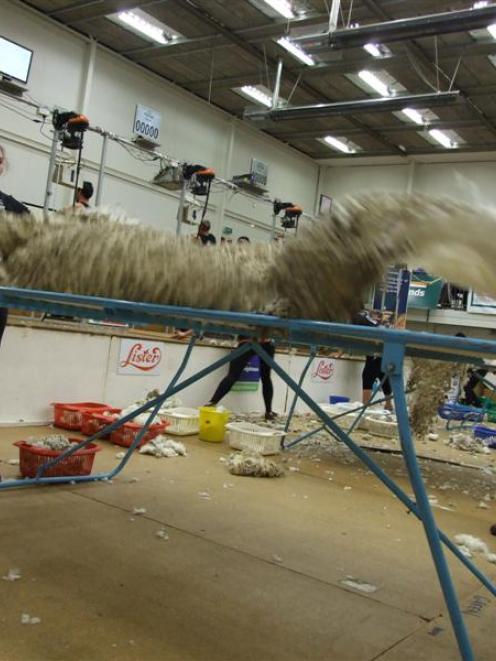 Pagan Rimene (27), of Alexandra, earned the loudest cheers at the prizegiving in Alexandra on Saturday night when she was announced as the winner of the open woolhandling title, ahead of national representative and defending champion Joel Henare, of Gisborne.

Rimene, the daughter of shearing contractor Dion Morrell and master woolhandler Tina Rimene, both of Alexandra, was competing in the senior shearing as well as the woolhandling at the national championships.

She was only one place away from making the quarterfinals of the shearing.

After her woolhandling win was announced, colleagues broke into a haka to mark the occasion.

Shearing contractor and contest committee member Peter Lyon said there were 60 entries in the open woolhandling - ''the biggest open field I've ever seen''.

Rimene was elated by her win but exhausted after two days of competition and hard training leading up to the event.

''I don't think it's really sunk in yet,'' she said. She was heading to Australia yesterday to work as a shearer.

Boyle said his first New Zealand merino shearing title in 2010 was the fulfillment of a dream he had had since he was 17.

He led all the way this year as top qualifier and top in the quarter and semifinals.

Last year, he won the event just a week after being cleared to compete, following surgery to remove a melanoma.

He remained in good health, he said: ''I've still got the all-clear at this stage.''

Despite his history in the event, he was taking nothing for granted.

''I was surprised I had such a good shear earlier on but it doesn't always mean anything ... anyone can come up in the final and have a better shear than you.''

Nathan Stratford, of Invercargill, was placed second in the open shearing final and Rimene' father, Morrell, was sixth.