Bid to save endangered Cromwell beetle 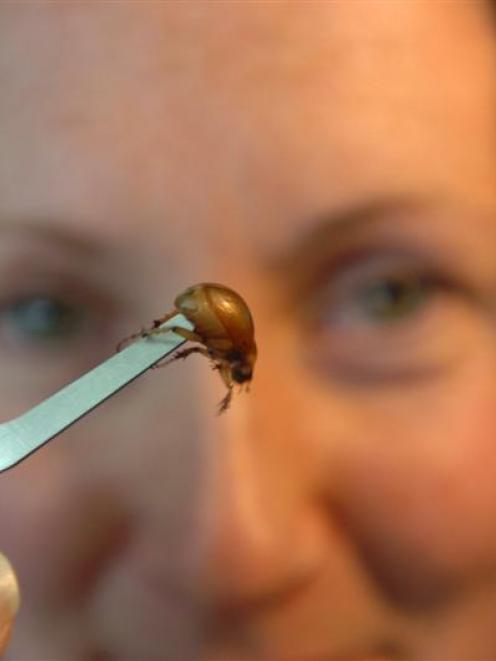 In a laboratory at AgResearch, Invermay, beetle eggs are hatched, the grubs (or larvae) are fattened up until they are old enough to pupate and the beetles are then grown to maturity and encouraged to complete the life cycle by mating.

But according to Dr Barbara Barratt, the AgResearch scientist heading the project, there are a few bugs to be ironed out yet.

From 60-70 eggs and newly-hatched larvae collected from the chafer beetle reserve at Cromwell, fewer than 10 survived to become fully fledged.

Like other scarabs she deals with, such as grass grub, chafer larvae seem to fatten up nicely on carrots.

But unlike grass grub, they then struggle to pupate.

An alternative diet of silver tussock root might be part the answer but that presents a logistical problem if the programme grows to produce thousands of adults for release into the reserve.

"We are going to have to have a quick and easy way of feeding them because it's just going to take too long to feed them chopped up bits of tussock root."

Dr Barratt also suspects chafer larvae use their large, powerful jaws to fight among themselves and they must each be kept isolated.

AgResearch staff will collect another 200 chafers from the Cromwell reserve next month - where they spend most of their life underground - and start the laboratory process again.

"I guess they are part of the idea that small can be beautiful and conservation isn't just about albatrosses and kakapos."