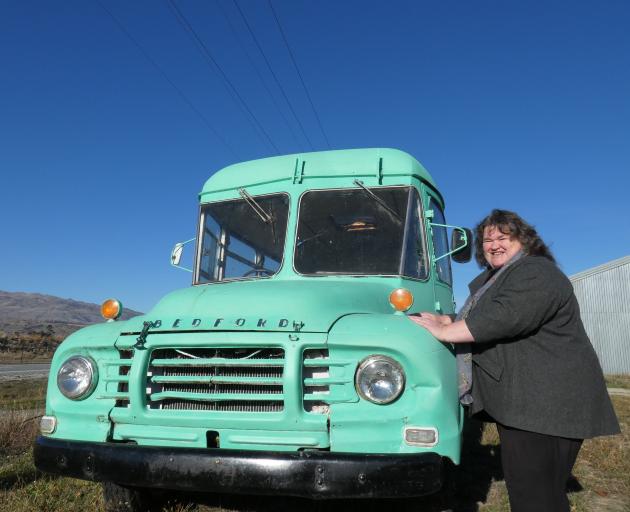 Judy Cockeram, of Cromwell, is over the moon that her bus has been found.PHOTO: SIMON HENDERSON
Billy the bus is back - and his owner couldn't be happier.

Judy Cockeram’s 1962 Bedford J2 bus has been recovered from a property in Garston and towed back to Cromwell.

Within hours of an update on the story of the bus running in the Otago Daily Times on Thursday, Mrs Cockeram was contacted by police in Lumsden saying the bus could be recovered.

The bus was parked in a grove of trees and had been painted green, possibly in an attempt to disguise it.

Remarkables Towing, of Queenstown, collected the bus and it was now securely parked on an orchard in Cromwell.

The interior of the bus had been stripped and a stove and chimney removed, but this was retrieved from where it had been discarded near the bus, Mrs Cockeram said.

The tale of Mrs Cockeram and the theft of the bus from her Kawarau Gorge property captured the hearts of readers.

She first reported it stolen in early April, and many got in touch or commented on social media, reporting on potential sightings of the bus and sending information to Mrs Cockeram.

"I’ve had some lovely letters."

Although police had known the location of the bus for about two weeks, she understood her old bus, with no real value, was not a high priority.

"It is of sentimental value, but god knows what else the police have had to deal with."

She was simply grateful this was a success story, and she thanked the police as well as all in the community who had offered information and support.

Mrs Cockeram planned to repaint and put the name "Billy the Bus" on the side of the bus.

"That is what everyone knows it as now."

Eventually, it would return to her property in the Kawarau Gorge, once she had decided how to keep it secure.

For Mrs Cockeram, pursuing the people responsible for the theft was not as important as having the bus back.

"I’m very grateful ... it is kind of wonderful to have him back."

A police spokesman confirmed a warrant was issued on Thursday and the bus had been returned to its owner.

No-one had been charged at this stage but police inquiries were continuing, he said.

"Although police had known the location of the bus for about two weeks, she understood her old bus, with no real value, was not a high priority". Too busy making sure motorists don't speed over 4km.

Exactly. And the perps will probably get off with a warning.

Indeed the roads Kingston to Lumsden,Five Rivers to Mossburn and Castlerock to Te Anau are fertile grounds for that.
As for Billy,his fate underlines the shortage of rental accommodation.

It’s theft, the dollar value is not a consideration surely. This theft took planning, stealth and determination. So let’s see them charged and at the very least a naming and shaming. Poor effort local police!