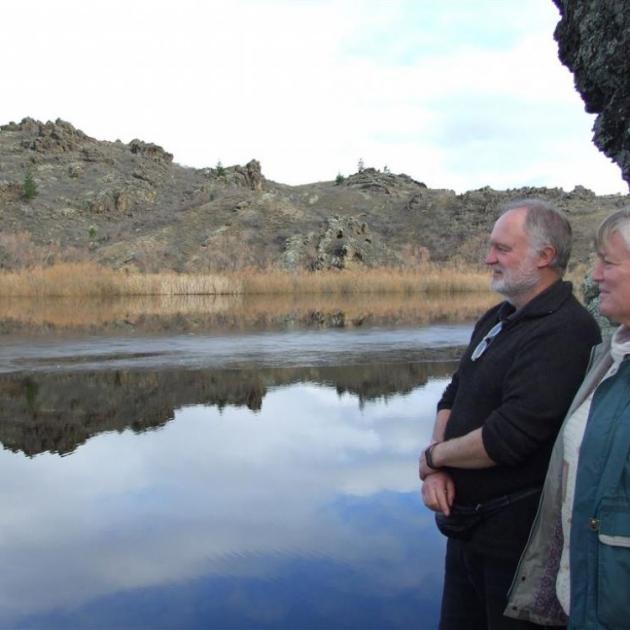 Ashley and Jacqui Hopkins study the light coating of ice on the Manorburn Dam near Alexandra yesterday. They had hoped for a series of frosts so they could experience their first national bonspiel but accepted it was too mild for that. PHOTO: LYNDA VAN KEMPEN
Hopes for a national bonspiel are fading as quickly as the ice on Central Otago dams.

Curlers from around the country gathered at Naseby last year for a bonspiel - the first in three years - but mild, wet weather is conspiring against curlers this year.

The Idaburn Dam has traditionally been the bonspiel venue but keen curler Ken Gillespie, who used to own the farm surrounding the dam and still lives nearby, said ice was in short supply there this winter.

"I walked right on to it last week, but you couldn't skate on it and it certainly wasn't deep enough to measure. There's been quite a thaw since then.''

"That's always seemed to be the case.''

Ice on the Centennial Ponds at Naseby, where last year's bonspiel was held, was thawing on Friday when he visited.

Although people were skating on the Manorburn Dam last Tuesday, the ice had mostly all melted by yesterday, with only a sheet of ice covering the centre of the dam.

Ashley and Jacqui Hopkins, of Drybread, are experiencing their first southern winter since moving from Auckland eight months ago. They visited the Manorburn yesterday and thought it was a picturesque spot, even without an ice covering.

The retired couple are enjoying living in Central Otago and said the dry, sunny weather was a nice contrast to the weather in their former home.

Mr Gillespie said even without a bonspiel, curlers had enjoyed "a fair bit of curling'' outdoors already this winter, on the Alexandra and Naseby outdoor ice rinks.