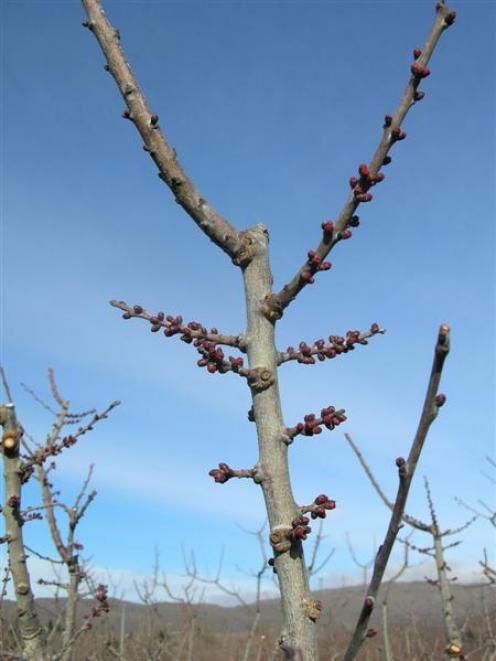 This apricot tree on a Rob's Rural Market orchard block at Earnscleugh has red buds, which is unusual for this time of year. Photo by Rosie Manins.
A mild start to winter could spell trouble for some Central Otago orchardists as buds start to "move" on fruit trees.

The early development of buds on apricot trees in particular can leave fruit vulnerable to heavy frosts later in the season.

McIntosh's Orchard owner Wayne McIntosh said buds on his trees at Earnscleugh were starting to move, although he was not worried about his crop yet.

"The bud movement is about four or five weeks ahead of last year, but it depends on what the temperatures are like this month.

"No-one knows what will happen.

It's just part of the variation of growing fruit," he said.

Mr McIntosh said if buds continued to move early, orchardists would have to be aware of the possible need for extensive frost-fighting.

"Our objective is to frost-fight as little as possible, but you have to take whatever measures are necessary.

"It is no cause for alarm just yet, but we are aware of the precautions we might need to take," he said.

At Rob's Rural Market in Earnscleugh, some of the orchard's apricot buds have turned red.

Owner Harry Roberts said he had seen early bud-moving before, and the next three weeks would tell what was in store for the crop.

"Some of our buds are quite red, which means they have broken the bud and are showing the petal cover already.

It could be a problem if we get a cold August, but it's still early days," he said.

Mr Roberts said this winter had been wetter than usual and ground moisture could aid the crop.

"It pushes up humidity, which lessens the severity of frosts."

In parts of his orchard, apricot trees were developing at different paces due to their position on the block.

Trees higher up or next to geographical features which trapped warm air pockets were developing as they would in spring, while lower down, where cool air sat, trees presented typical winter growth.