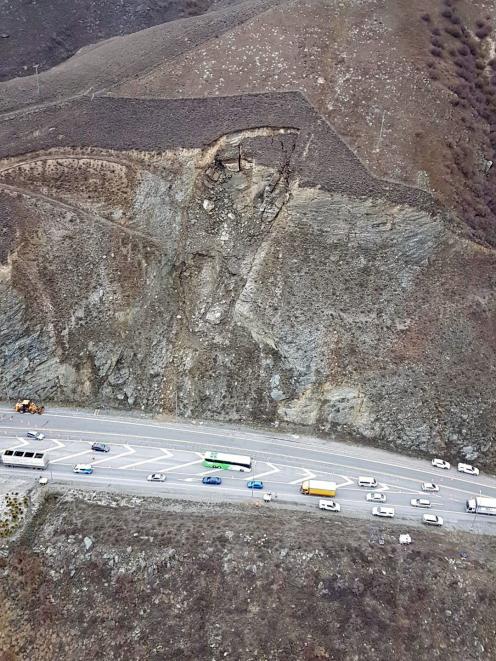 That was due to ongoing sluicing using two helicopters with moonson buckets to loosen the slip. Geotechnical engineers estimated it to be 8000-9000 cubic metres and it was continuing to slowly move down the hillside towards the highway.

"There’s been a couple of large boulders hit the highway."

"It moves then it sort of grinds to a halt.

"Sluice it a bit more and flush out some of the material in it’s way and it moves again."

While the slip had visibly moved, it was "hard to say" how far, he said.

Overnight the site would be floodlit. Watching and listening by those on site were key skills, looking for visible rockfall and listening the trickling sound of smaller sediment, he said. Both indicated slip movement.

The highway was checked for potential slips every six months but the slip site was not identified as a risk until Tuesday, he said.

No other sites on the highway had been identified since the slip started.

Agency geotechnical engineers would inspect the site about 7.30am this morning and sluicing would resume about 9.30am.

NZTA said today it would install extra barriers at the site which would allow the road to be reopened to two lanes this weekend.

Mr Stewart said crews were aiming to have the safety barriers in place by Saturday and the road would remain restricted to a single lane until the barriers were in place.

The slip, which measures roughly 30m from top to bottom, 20m wide and 15m deep, was made up of schist, earth, tussock and other vegetation.