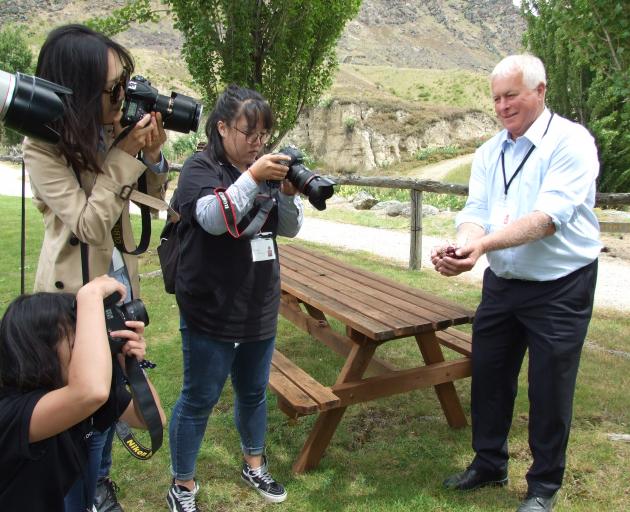 Grower Gary Bennetts, of Roxburgh, holds a handful of cherries and poses for (from left) photographer Cherry Zhang, of China, blogger Lara Meng, of Auckland, and photographer Moon Chen, of China, who placed the images online. Photo by Lynda van Kempen.
A food blogger with 19 million followers was among an international group touring Central Otago orchards yesterday, highlighting the increasing importance of social media in marketing the district's fruit overseas.

Central Otago Premium Fruit Ltd, a grower-owned company, hosted the delegation, which toured a packhouse and viewed a cherry orchard with fruit ready for harvest.

The 48-strong group included Chinese and Vietnamese wholesalers, airline representatives, bloggers and New Zealand Trade and Enterprise staff based in Shanghai and in this country.

Shanghai-based trade commissioner Damon Paling said New Zealand cherry growers were relatively small players and isolated from the market, so needed to look to their strengths and be innovative in a ''light, agile way''.

Competing cherry growers in Chile were rumoured to have a $7million dollar advertising budget, of which 95% was spent in the Chinese market, he said.

Tapping into social media was one way New Zealand could ''win'' in China. He gave Jing Li, who was in the delegation, as an example.

She had 19 million followers on social media and there was a ''great buzz'' about the impending arrival of New Zealand cherries in the Chinese market as the season got under way, he said.

She was seen as a key opinion leader and had studied cooking in this country, returning home and publishing books on cooking and setting up the blog promoting New Zealand ingredients.

Mr Paling said a lot of nature and nurture went into premium fruit.

''We have growers who know their stuff but they do that by treating their trees like members of their family,'' he said.

''I hope you all go home as brand ambassadors for Central Otago,'' he told the guests.

Central Otago Mayor Tim Cadogan said the district produced the best cherries in the world and he believed there was a great future for an alliance between Central Otago and Chinese consumers.

Central Otago Premium Fruit Ltd chairman Malcolm Macpherson thanked the orchardists for opening up their businesses. He said the district had many small family orchards that produced exceptional fruit and the delegation enjoyed meeting the people responsible for it.