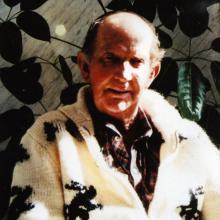 Eden Hore.
More than three years after its controversial purchase of the Eden Hore fashion collection, the Central Otago District Council is about to decide the future of its investment.

A $40,000 grant funded a feasibility study into the long-term care, management and display of the collection and the options will be considered at a council meeting on Wednesday. The council fielded criticism about spending $40,000 to buy the 276-item collection in August 2013. The garments, collected by late Naseby farmer Eden Hore, are regarded as the country's largest private collection of 1970s  and 1980s couture fashion.

It was originally displayed at Mr Hore's property  and when he died, he left the garments to his nephew John Steele. Mr Steele retired from the property in 2013 and offered the collection to the council, in the hope it would continue to be displayed in the Maniototo.

A council spokeswoman said the report on the options for the collection's future would be presented to the council by Tim Walker, the principal consultant of the company which prepared the report.

The study outlined options, including selling the collection, retaining it with limited public display, and retaining it and developing a coalition model for its management, promotion and display.

The report to council recommended the collection be retained and a staged approach taken to its care and management. The focus this financial year would be on garment care, cataloguing and developing the ''story'' behind the collection.

Options will be discussed in open meeting and the public was welcome to attend, the spokeswoman said. The item would be discussed about 11.30am. The feasibility study listed three key concepts which underpinned the value of the collection.

One was that the garments gave a unique insight into the fashion industry and New Zealand social history of the time. Another was the ''rich story value'' of the story behind the collection, both for avant garde fashion and in outlining the philosophy of high country farmer Mr Hore.

The third element was the potential to develop high-quality visitor experiences to celebrate the collection. Mr Walker will also present his report at a public meeting in Naseby on Thursday, December 15, at the Naseby Town Hall, starting at 5pm. The funding for the feasibility study was through a Lotteries Commission World War 1 Commemorations, Environment and Heritage fund.

In October, a Maniototo resident suggested the historic Maniototo Hospital, which will be vacant if a $5 million upgrade of the district's rest-home and hospital proceeds, could get a new lease of life as the home for the fashion collection.

A council spokeswoman said the Hore collection report would be available online today in the council agenda.